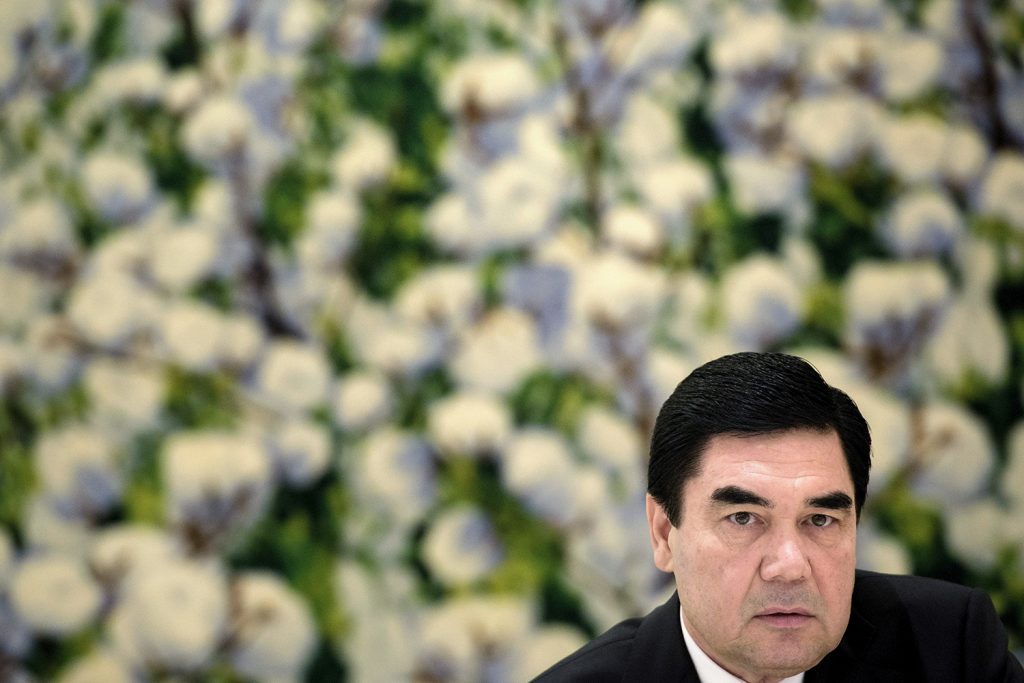 At the September 25 meeting of Turkmenistan’s Halk Maslahaty (People’s Council), the president-for-life Gurbanguly Berdimhammedow announced his aim to expand the legislature through a constitutional amendment. While this proposal will have impacts on how the executive and legislature function, for the 5 million people of Turkmenistan this development will mean more of the same presidential authoritarianism. The capital, Ashgabat, is whispering that the president plans to place his son Serdar in a leadership role, while he takes on the mantle of sage advisor, becoming the power behind the throne (rather than on it).  In essence, Berdimuhamedow is securing hereditary succession for his son, while retaining power.

Turkmenistan currently has a unicameral, directly elected parliament (Mejlis) that passes legislation after it has been vetted and discussed in the People’s Council, which consists of deputies who are elected by local councils at the regional level. The president is the chair of the People’s Council, giving him a determinative position over the legislative branch as well as the executive and erasing the line between these two branches of government.

At the September meeting, President Berdimuhamedow proposed that the state elevate the People’s Council to create a two-chamber legislature. To that end, he instructed the government to create a State Commission to collect proposals for constitutional amendments.  Proposals will come before the People’s Council at its next meeting in 2020. Formalizing the influence of the People’s Council over the parliament will have the long-term effect of deepening authoritarianism as there will no longer be a separation of powers in Turkmenistan’s government.

Berdimuhamedow explained that he was proposing this constitutional change to advance Turkmenistan’s “national democratic tradition [milli demokratik ýörelgeler].” The leader clarified, that “the transition to a qualitatively new two chamber system will allow for representing the interests of all sectors of the Turkmen society and creating the conditions for supervision in law enforcement practice. This will give an impetus to closer interaction of deputies with voters and strengthening control over the implementation of laws and national programs.”

While such sweeping and progressive sounding statements abound in Berdimuhamedow’s rhetoric, there is no democratic tradition to speak of and the state has little regard for voters’ opinions. “Strengthening control” is the type of leadership Turkmen have come to expect.

Thirty-eight-year-old Serdar already holds the rank of lieutenant colonel, is a member of parliament, and deputy governor of the politically important Ahal regional administration. He also worked as the deputy foreign minister. Such a resume will serve him well as he scales the heights of bureaucracy.

In 2018, locals witnessed a symbolic act between Serdar and his father when the Turkmen leader passed the baton to his son while running in a race. State-sponsored press in Turkmenistan described this act as “a symbol of the continuity of generations.” The president is grooming Serdar with a sense of urgency.

Berdimhamedow may be taking his cues from his region’s succession stories. Turkmenistan’s first president Saparmurat Niyazov did not prepare for succession. His son Murat, who was considered a likely successor, was left with nothing and now lives abroad. When Uzbek leader Islam Karimov died in 2016 his family lost everything because he failed to make provisions for them. Conversely, when Nursultan Nazarbayev voluntarily stepped down from the presidency of Kazakhstan, his daughter Dariga was well placed in the government and retained her position in that country’s Senate leadership. She is now second in the line of presidential succession. Could these regional experiences at the leadership level have been telltale signs for Berdimuhamedow to get his house—and family legacy—in order?

This is a very real question for man who is known to have serious medical problems and was recently suspected of being dead or incapacitated. For more than three weeks in August 2019, Berdimuhamedow abruptly disappeared leaving the world to wonder if he was still alive. This was a critical question because he holds complete authority, leading the military, overseeing the bureaucracy and education system, and even determining cotton outputs—in advance of the harvest.

September was not the first time Berdimuhamedow has discussed constitutional change regarding the legislature. He introduced the idea of a constitutional amendment last year, when he assumed the chair of the People’s Council. But events have developed since his initial proposal.

At last year’s People’s Council (to which foreign diplomats were pointedly not invited), Berdimuhamedow made clear that the legislature would expand with him as its head, the upper chamber being the People’s Council and the lower chamber being the Mejlis. Making a constitutional amendment will simply put in writing what he already has stated will be the new structure.

Rumors have circulated around Ashgabat that Berdimuhamedow would step down symbolically from the presidency, but as chair of the People’s Council would supervise a new head of state similar to the supreme leader in Iran. A more apt comparison is found in neighboring Kazakhstan, where in March 2019 president Nazarbayev stepped down in favor of his protégé Kassym Jomart Tokayev. Nazarbayev is no longer president but remains the most powerful man in Kazakhstan as chairman of the Security Council. However, neither of these scenarios can come to fruition until Serdar is elevated. The long game is to make Serdar president with himself acting as a shadow head of state.

The ultimate significance of president Berdimuhamedow’s September call for legislative expansion is that when Serdar turns forty he can be elected president according to the constitution and succession can be assured with Berdimuhamedow remaining in control at the pinnacle until he dies. Technically this would mean a peaceful succession. In the meantime, Serdar gets to move from job to job, gaining experience and authority, and earning his spurs.

Those who follow the country will want to watch closely to see how this proposal changes government procedures. However, not much is likely to change and important points such as the US government’s ban on importing Turkmen cotton will not be repealed; Washington will not remove Turkmenistan from the Tier 1 list of Countries of Particular Concern based on its restrictive religious policies; and what the Turkmen people need most—jobs—will not materialize.

The proposed constitutional amendment will reinforce Gurbanguly Berdimuhamedow’s power and assure his multigenerational legacy. His short-term plan is to strengthen his status by assuming control over both the executive and legislative branches of government. The long-term plan is to create the opportunity for Serdar to succeed him and hinder Serdar’s potential opponents. Serdar will be in a position to take over the presidency while his father commands the legislative branch, retaining his authoritarian role.

Victoria Clement is the Eurasia regional analyst for professional solutions at the Center for Advanced Operational Culture Learning at Marine Corps University and author of Learning to Become Turkmen: Literacy, Language, and Power, 1914-2014 (University of Pittsburgh Press, 2018).

Steps towards reform in politics, law, economics, administration, civil society, and foreign relations by the new Kazakh president should compel the United States and its allies to take a more engaged and active approach to Kazakhstan.

A new era for Uzbekistan

By Aziz Egamov and Rafael Sattarov

Shavkat Mirziyoyev has charted a fiercely independent foreign policy that aims to mend ties with Uzbekistan’s neighbors and boost its economy.