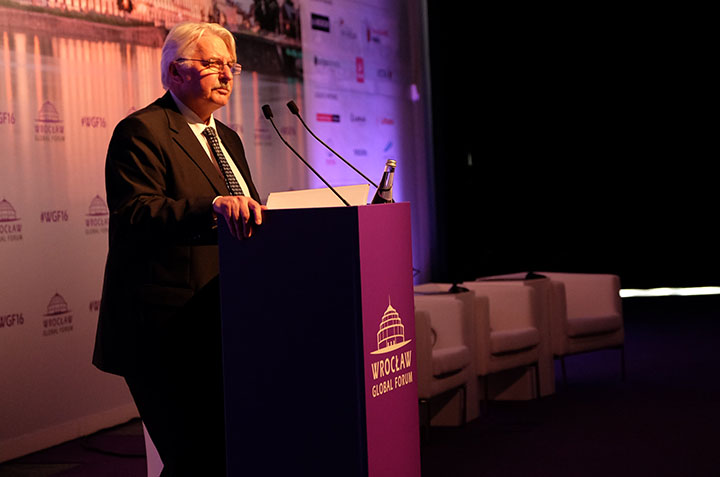 NATO should undertake a “substantial” military buildup in Poland and the Baltic States to address the challenge posed by an “aggressive” and “revisionist” Russia, Poland’s Foreign Minister, Witold Waszczykowski, said on June 2.

“NATO’s keyword should be deterrence…not as an offensive measure, but rather as the most effective and, in fact, only instrument of peacebuilding,” he said.

“We do not want to wage a war against anyone, but to avoid a war scenario we must show that we are very well prepared and determined to defend our territory and values we share,” he added.

Besides noting the threat Russia poses in Europe’s east, Waszczykowski said challenges on Europe’s south, where failed and failing states have led more than a million migrants to flee to Europe, “directly threaten our security, stability, and prosperity.” He called for an adequate NATO response to both of these challenges.

Waszczykowski delivered the keynote address at the Wrocław Global Forum, jointly hosted by the Atlantic Council, the Polish Institute of International Affairs, and the City of Wrocław in Wrocław, Poland.

NATO’s annual summit will be held in the Polish capital, Warsaw, in July. That NATO’s twenty-eight member states have different perceptions of threats should come as no surprise considering their different historical experiences, geographies, and, very often, different geopolitics, the minister said.

“In order to deliver, NATO has to manage the situation on both flanks—eastern and southern. We simply must match the appropriate defense and deterrence measures with the character of threats,” he said.

“Nobody should question the principle according to which all member states across the entire territory of the alliance should be given an equal security status,” he added.

Poland is one of five NATO member states that meet the alliance’s goal of spending two percent of the state’s GDP on defense. A robust defense budget alone is not enough to defend against the security challenges posed by Russia, which US Defense Secretary Ash Carter has described as a pre-eminent threat to US national security interests.

Waszczykowski said countries like Poland would therefore like to see NATO beef up its physical presence on the eastern flank thereby providing “real security guarantees” to all its members.

“Only a substantial investment in infrastructure, the stationing, deployment of NATO troops on the ground can give Poland and its neighbors, of course, the security we need, and thus level the unequal status,” Waszczykowski said.

The minister said this buildup should include a “multinational forward presence of all allied forces in Poland and in the Baltic States.” Such a presence of troops from different NATO countries should become a “symbol of the alliance’s determination to defend the eastern flank,” he added.

NATO has already drawn up plans to deploy four combat battalions in Poland and the three Baltic States: Estonia, Latvia, and Lithuania. The alliance also intends to conduct major military exercises in Poland; US military officials in May inaugurated a missile interceptor site in Romania, which will be part of a larger missile defense shield and the Pentagon has quadrupled its  budget for European defense in 2017 in light of Russian threats. Russia has responded with a pledge to deploy three divisions of roughly 10,000 troops each to its western and southern flanks by the end of this year.

Speaking at the Atlantic Council in Washington on May 10, Chuck Hagel, a distinguished statesman at the Council and a former US secretary of defense, cautioned against “the centrifugal force” of a military buildup that could drag NATO and Russia into a Cold War-type scenario.

NATO Secretary General Jens Stoltenberg said in Berlin on June 2 that the military buildup is aimed at preventing conflict.

Russia threatens the West as a whole by challenging territorial integrity as well as the political unity of the transatlantic community, Waszczykowski said. He accused Russia of turning toward a Cold War mentality.

Waszczykowski sought to “debunk the myth” that Russia’s actions are a reaction to aggressive Western policies and, more specifically, to NATO’s eastern expansion. NATO and the European Union have for years sought to create a “privileged relationship” with Russia and to accommodate the Kremlin’s concerns by setting up the NATO-Russia Council. Furthermore, Russia has shaped discussions on NATO membership for Ukraine and Georgia, he said.

Russia has responded with aggression, Waszczykowski said citing Russia’s intervention in Georgia in 2008, Russian military exercises based on a scenario that envisaged a NATO attack on Belarus in 2009, and an eighty percent increase in Russia’s defense spending since 2007. Russia also annexed Crimea from Ukraine in March of 2014 and has since backed separatists in eastern Ukraine.

Nevertheless, the Polish minister acknowledged the need to keep open channels of communication with Moscow. “Dialogue should not be seen as a policy in itself,” he said. “Dialogue should be based on a sound assessment of Russia’s posture, otherwise we could end up in a divisive discussion. We cannot allow that to happen.”

Threats from the south

Europe today is witnessing the largest movement of migrants across the continent since World War II. Many of these migrants are fleeing the war in Syria.

A controversial deal struck between the European Union and Turkey has stemmed the flow of migrants across the Aegean Sea, but as the summer months calm the Mediterranean Sea, more and more migrants are undertaking perilous journeys from Libya to Europe. More than 1,000 people are believed to have died when the overcrowded boats in which they were traveling capsized last week.

Waszczykowski noted the pressure the migrants are placing on Europe and the threat posed by foreign fighters who have joined the ranks of the Islamic State of Iraq and al-Sham (ISIS or Daesh). “Terrorist attacks perpetrated in Europe have shown that no country should feel immune to the risks that emanate from the south and pose a long-term threat to the well-being of Europeans,” he said.  ISIS claimed responsibility for terrorist attacks in Paris in November 2015 and in Brussels in March of this year.

Failed states on Europe’s southern doorstep provide transit routes for criminals to smuggle people, drugs, and weapons. “Our southern neighborhood has become a source of instability,” said Waszczykowski, “which is a concern for the whole transatlantic community.”

The minister welcomed NATO’s decision on Montenegro’s accession, but noted that the alliance’s enlargement process is not finished. Macedonia, Bosnia and Herzegovina, and Georgia are still waiting to join. “We cannot allow a third country to have a say on the future of the alliance,” he said referring to Russia.

Waszczykowski called for deepening partnerships with like-minded nations, including Finland and Sweden, and strengthening the resilience of Ukraine and Georgia to face external threats.

“What is at stake at the Warsaw summit, very briefly, is the preservation of the alliance’s unity,” Waszczykowski said. “We cannot let differences prevail over common purpose. The principle of twenty-eight for twenty-eight should become NATO’s axiom.”

“It is crucial that NATO maintains the reputation of its power,” the minister said. “If we show doubt and disunity, we will not only deteriorate the long-term security of all allies, but also encourage those who wish to perceive NATO as an enemy to continue their destructive policies.”

Image: “NATO’s keyword should be deterrence…not as an offensive measure, but rather as the most effective and, in fact, only instrument of peacebuilding,” Poland’s Foreign Minister, Witold Waszczykowski, said at the Wrocław Global Forum in Wrocław, Poland, on June 2. (DG ART Projects/www.dgart.pl)