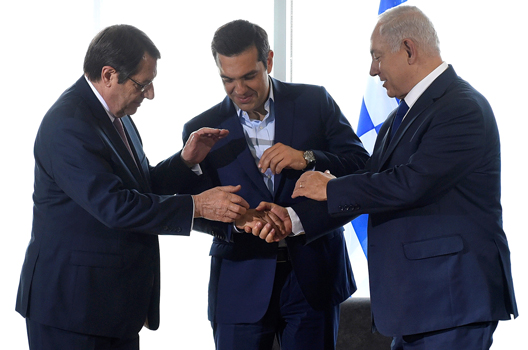 Over the past decade, major offshore natural gas finds in Egyptian, Israeli, and Cypriot waters have fueled an ongoing debate over how to get that gas to market. Fixed midstream assets and pipes will be key to getting the gas out of the region, and various export routes present their own challenges. Recent political developments in Cyprus and subsequent Turkish military deployments in the region following the collapse of the country’s unification talks are narrowing options.

Competing export routes to move offshore natural gas north via Cyprus to Turkey, south to Egypt, and inland to Israel, have been considered. More expensive options such as capital-intensive floating liquefied natural gas (FLNG) facilities and longer subsea pipelines offer their own prospects. In April 2017, European and Israeli ministers expressed their support for the Eastern Mediterranean (EastMed) Gas Pipeline via Crete to bring gas directly to the European continent while bypassing Turkey and avoiding liquefaction. The arguments for each of these options are to some extent political, and the reach of those politics extends to Russia, the Levant, North Africa, and beyond.

Business cases are rooted firmly in project economics, and lofty political ambition is certainly insufficient to start breaking ground. Even in the boardroom though, economic risk evaluations over the project life cycle impact the final analysis, and political uncertainty can sour the case for otherwise viable projects.

Therefore, it should not come as a great surprise that the flurry of activity on the political side in mid-2017 is serving to close off options in the East Mediterranean rather than expand them.

Something of a consensus emerged among observers in 2016 and early 2017 that a pipeline route north to Turkey via Cyprus presented the most economical way to bring the gas to European markets. Those economics were not necessarily obvious—landing at the southern Turkish coast would still require expensive onward connections through mountainous terrain to reach the Trans-Anatolian Pipeline (TANAP) and the wider Southern Gas Corridor (SGC) pipeline complex. However, Turkey’s domestic gas market has grown considerably faster than European demand (almost doubling in the past decade), and the required infrastructure remains cheaper than longer undersea routes or reliance on liquefied natural gas (whether fixed or floating).

The route to Turkey also held out political potential. As the latest round of Cypriot unification talks commenced earlier this year, it was hoped that gas project plans would grease the wheels of a compromise. The route north also played into long-standing Turkish efforts to become a regional energy hub, and using Turkey to tie Israel and perhaps Egypt more closely to Europe enticed pro-integration optimists.

Meanwhile, European efforts in support of the more expensive line to Crete and onward to continental Europe seemed like political bluster lacking a serious business case, and the potential for onshore Egyptian links beyond the domestic market was marred by the ups and downs of politics in the Red Sea and the wider region.

However mid-summer developments have undermined the case for optimism over the Turkish option. The collapse in July of Cypriot reunification talks and subsequent Turkish posturing have not necessarily changed the game, but rather exposed underlying strategic shifts that have been underway for years. For example, Turkey’s domestic political dynamics and nationalistic fervor are weakening its previous commitment to a “zero problems with neighbors” foreign policy. Meanwhile the glue of NATO membership has been weakened by American strategic inconsistency, and the pull of European Union (EU) membership has faded as the institution’s raison d’etre has suffered from Brexit and the rise of populist rhetoric across Europe.

The practical consequence for Eastern Mediterranean gas is that hard-nosed risk valuations surrounding the investment of billions of dollars to build a pipeline via a divided Cyprus and an emboldened Turkey (prepared to send warships to fend off private gas vessels in EU waters) have altered.

Despite the April summit and their support for a direct route to the EU, European Commission officials are certainly not celebrating. Cypriot division is a black stain on European unification, and Turkey is a vital partner for Europe on issues from trade to migration to Syria. However recent events go some way toward justifying their concerns about a long-term reliance on Ankara for energy security. Companies like ENI and Total will be re-evaluating their enterprise risk management as Turkish warships harass their vessels around Cyprus, and Edison and DEPA will find new support for their EastMed proposal. That proposal’s €6.2 billion price tag will still hold it back absent substantial further gas finds around Cyprus – increasing Turkey’s incentive to block exploration activities there.

Over the longer term, renewed Turkish and Cypriot acrimony (and its impact on business) must be seen in the context of the wider breakdown of institutional norms. The reticence of the Trump Administration to back international compromise and its own defense of “America First” gives license to others to openly engage in nationalistic confrontation from the GCC to Eastern Europe to Asia to the Mediterranean. Washington’s half-hearted efforts to support the Cypriot negotiations finally seemed insincere, even if spared the impulsive tweet diplomacy wrought on the GCC crisis.

Despite their interests in a cooperative and unified southeastern flank, Europeans would be foolish not to mitigate their own energy security risks in the face of these new realities. The Energy Union Framework and the EU Energy Security Strategy were designed with an eye to Moscow, but supply dependence on Erdogan’s Turkey raises its own questions.

Eventually companies’ enterprise risk calculations are impacted by wider political developments, and political decisions can certainly impede investment. On the other hand, political will could help get project decision to ‘yes,’ with a dollop of public financing from multilateral finance institutions in London, Luxembourg, and Brussels.

The EastMed pipeline may be seen in Brussels as a boon to European energy security, but its lower risk profile means that it is also looking more attractive to investors. The same is true of FLNG. Given the outlook for politics in the region after the events of July, the more expensive options may suddenly seem the most viable.