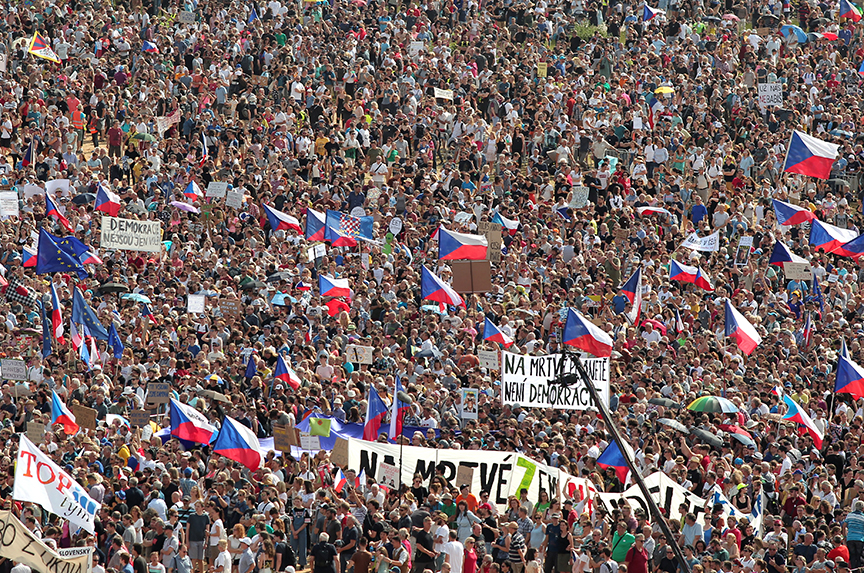 The estimated 250 000 people who protested in Prague’s Letná park on June 23, the largest-ever protest in the Czech Republic since the Velvet Revolution of 1989, caught the attention of analysts across the Continent who wondered whether Czech Prime Minister Andrej Babiš would be forced to resign. Despite the magnitude of the protest that brought together 2 percent of the national population, little is expected to change politically, and the protest will likely remain no more than a tool to mobilize and reenergize civil society in the country.

No immediate political change is expected, as was evident from Babiš’ combative tone on June 26,  before his government survived a no-confidence vote. The minority ruling coalition partner, the Social Democrats, decided to maintain their confidence in the Babiš government, despite strong internal tensions.

There is also no alternative to the Babiš government. According to an opinion poll released on June 28, Babiš’ ANO (Action of Dissatisfied Citizens) party would win a general election with 29 percent of the vote—a 12 percent margin over its closest opponent, the Czech Pirate Party, and 14 percent over the conservative Civic Democratic Party (ODS). Behind these parties, a constellation of other parties are together likely to get 10 percent of the vote.

Overall, the fragmented Czech opposition seems unable and unwilling to provide an alternative to Babiš. It will wait out further developments concerning the prime minister’s supposed conflicts of interest knowing that Babiš himself has said he has no intention of stepping  down. The organizers of the protest in June—“Million Moments for Democracy,” a student-led civil society group—have ruled out turning the movement into a political party. They say doing so would weaken the value of the protests and of the messages that were expressed.

While some protesters called for Babiš’ resignation, the protest, in general, was marked by other demands which were considered more important. The protesters focused on issues such as rule of law, an increased transparency by politicians, and conflicts of interest and abuse of power, both of which Babiš is accused of. The protests were a moment of civil awakening for the Czech people rather than a simple message of political opposition as was evident from the many interviews of protesters by the Czech  press.

Both Babiš and Czech President Miloš Zeman were dismissive of the protests. The prime minister said “the more money we give people, the more dissatisfied they are”; the president said the protesters were doing nothing more than “protesting the results of the elections.” Both these reactions fundamentally misunderstand the protesters’ motivations.

The fact that some protesters came from outside of Prague, a rarity in previous iterations of the protests, shows that the messages resonate deeply in Czech society and are linked to decency and respect of the rule of law, two issues that featured prominently in the anti-corruption protests that shook Slovakia the last two years and laid the ground for the election of President Zuzana Čaputová, an anti-corruption lawyer. There is, however,  no similar personality with political ambitions in the Czech Republic at present. The next presidential elections in 2023 could present an opportunity for the emergence of such a figure.

The protests in Prague have succeeded in increasing pressure on Babiš. The Czech police has recommended that the prime minister face criminal prosecution for allegedly embezzling €2 million of regional funds for the construction of a hotel and conference center south of Prague owned by one of Babiš’ companies. Two ongoing audits by the European Commission have highlighted the deep conflict of interest Babiš’ is in by being able to influence the delivery of the European Union’s Common Agricultural Policy (CAP) funds, of which his company, Agrofert, and other subsidiaries, are the main beneficiaries. Rumors swirled, and were vehemently denied, that the Czech Republic may be forced to return up to €25 million of CAP funds, but European Commission audit is far from over.

Babiš has claimed that the investigation is a personal attack by Brussels against the Czech Republic and would cause his party to lose ground in European parliamentary elections in May. The ANO party eventually won the European election running a Euroskeptic campaign. This campaign imitated US President Donald J. Trump’s 2016 campaign by using the trademark red hat with the words “Strong Czech Republic” emblazoned on it—a particularly uninspiring, but highly symbolic slogan in a European campaign that is supposed to bring Europeans together rather than incite nationalism.

The Prague protests send a message of cautious optimism about the health of democracy and civil society in the Czech Republic. If a newly awakened civil society can energize political parties to set new terms for debates about future domestic orientations of the country, then the protests will have served a key purpose. In the short term, however, the protests have only emboldened Babiš in the “one against all” mentality that led him to political prominence, even if it could be detrimental to the standing of the Czech Republic in the European Union. Elected on an anti-system platform, it is clear that the prime minister sees these events as the system fighting back, which reinforce his determination to stand his ground.

Most Czechs are concerned about pocketbook issues. This was evident from their strong preference for the ANO party, which in the last year increased wages for public servants and pensions for all, reduced transport fares for large groups of the population— popular measures that trumped concerns about the rule of law. The period of political apathy that characterized Czech life is far from over. The recent protests, however, signal a new breath of life in the country.

Martin Michelot is the deputy director of EUROPEUM Institute for European Policy, a Prague-based think tank, and an associate research fellow at the Jacques Delors Institute in Paris. Follow him on Twitter @martinmichelot.