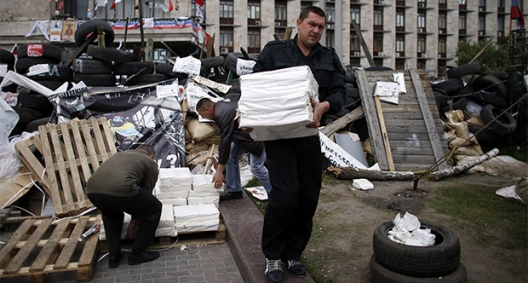 After weeks of supporting plans by pro-Russian separatists to hold a referendum in southeastern Ukraine, Russian President Vladimir Putin’s call yesterday for a delay in the vote is a tactical retreat in his campaign to prevent the consolidation of a truly independent Ukrainian government. It appears motivated mainly by Russia’s failure to gain sufficient control in the southeastern Donbas region, says Atlantic Council Senior Fellow Adrian Karatnycky.

Secessionist leaders in Donetsk and Lugansk provinces vowed today to hold the plebiscite on Sunday. But while their masked squads of gunmen hold many government buildings and control road traffic in numerous cities, they have not established the broad authority and the public sense of calm that would permit a real, or even a credibly simulated, vote. An underlying factor is likely to be the continued deep divisions within the secessionist camp. Its fighters and activists come from disparate places in Ukraine and Russia, and belong to various groups with different goals for their combined uprising. Interviewed in the Ukrainian and international press, some of the militants seek an outright Russian takeover of Donbas, while others want to stay in a more federalized Ukraine.

Few signs are visible of the kind of coordination and preparation that would be required for a balloting process that would even look legitimate, according to independent observers. “There are no signs of logistical preparation for the referendum,” said Michael Bociurkiw, the spokesman in Ukraine for the Organization for Security and Cooperation in Europe (OSCE), which has monitoring teams in Donetsk and other cities. “There’s been printing of leaflets and advertising of the event but we’ve seen no actual polling station preparation,” he said in an interview. Oleksiy Matsuka, a prominent Donetsk journalist who runs Novosti Donbasa, a news website covering the region, agreed, saying the designated coordinator for the vote could offer almost no details last week of his plans for organizing it.

The population in the rebel-dominated areas is anxious amid the turmoil of daily life. The roadblocks run by armed men have isolated cities and made movement difficult and dangerous. The separatists’ self-proclaimed mayors and governors have alienated local business and political elites, Karatnycky notes.

A recent opinion survey conducted April 10-15 by the Kyiv International Institute of Sociology found residents more troubled by the criminality and disorder in their regions than by the interim government in Kyiv that Moscow portrays as the menacing, fascist oppressor of the ethnic Russian minority. (The poll covered Mykolayiv, Kherson, Dnipropetrovsk, Kharkiv, Donetsk and Luhansk provinces.)

In Donetsk, the province’s separatist leader, Denis Pushilin, declared that the referendum will go ahead because “there are millions of people who want to cast their votes. Even if we had voted against holding the referendum, it would have happened anyway.”

Moscow signaled its reversal not only with Putin’s public call for a delay in the vote, but in the announcement by the Russian parliament that it would not send observers for the planned plebiscite. And Putin said he had ordered a pullback of Russian troops – 40,000 by the US government’s estimate – deployed near Ukraine’s borders.

The West offered a wary welcome to Putin’s talk of reducing tensions. NATO Secretary General Anders Fogh Rasmussen said last night the alliance had not seen any pullback of Russia’s forces. And U.S. State Department spokesperson Jen Psaki called on Russia to “use its influence” to ensure that Ukraine’s May 25 presidential election proceeds peacefully. “There is far more that President Putin and the Russians can do to de-escalate the situation and ensure safe elections,” she said.

Ukraine’s interim government reacted with weary skepticism to Putin’s call for a delayed referendum. “Someone should inform the Russian president that Ukraine wasn’t planning on holding a referendum. If the terrorists and separatists that Russia supports received instructions to postpone that, which we weren’t planning, that’s their internal business” said Prime Minister Arseniy Yatsenyuk.

Popular Uprising: The Cartoon Version
This week’s most sadly bizarre portrayal of the power struggle for eastern Ukraine came with the release by the state Security Service of Ukraine (SBU) of an telephone call recorded between Alexander Barkashov, the longtime leader in Moscow of a Russian neo-Nazi group called Russian National Unity (Russkoye Narodnoye Edinstvo, or RNE) and Dmitriy Boitsov, the head of an obscure Donetsk organization calling itself Orthodox Donbas. Barkashov, a former Russian army special forces corporal, maintains good relations with military and police agencies in Russia, for which he says his group’s black-uniformed paramilitary members are available to serve as reserve forces.

SBU posted to YouTube its recording of the two-minute-plus conversation with accurate English subtitles, expletives included. In it, Boitsov says that the separatist forces don’t control Donetsk province well enough to manage Sunday’s vote. “We’re not able to carry this referendum out, we’re surrounded, Donetsk won’t hold” he says.

“Hang in there” answers Barkashov from Moscow. “You must follow through, otherwise it will look as if you’ve been scared.”

“We’re not scared, it’s just that nothing is ready for the referendum,” Boitsov replies. “It’s impossible to conduct it legally while we’re surrounded.”

“Dima, just flog whatever you want. Write down something like 99 percent,” says Barkashov. Just write it all in. What are you gonna do, walk around and collect [ballot] papers? … Let’s say 89 percent voted for the Donetsk Republic. And that’s it!”

Boitsov is an obscure Russian nationalist in Donetsk circles, said Matsuka, the journalist and publisher. It’s unclear that the separatist leadership in the province actually has given him any responsibility for trying to hold the vote. “There are about six different groups in these separatist circles and they don’t coordinate anything between each other. [Boitsov’s] Orthodox Donbass is a virtual organization; it has no following or support,” Matsuka said.