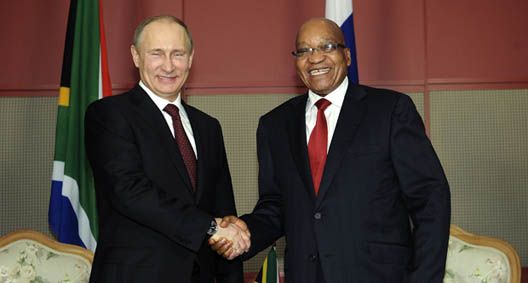 Russia Has Reversed Its Yeltsin-Era Retreat from Sub-Saharan Africa

In the two weeks since Russian President Vladimir Putin surprised governments and publics by invading Ukraine, writers have launched a veritable industry of analysis that has included his worldview, his KGB roots, his penchant for shirtless photos, and his foreign policy ambitions. Non-stop coverage of the Crimea crisis, and discussions of Russia’s roles in the Syrian war and in nuclear talks with Iran, have illuminated Putin’s policies in Eastern Europe and the Middle East.

But to understand the ambitions of Russia and its leader, we also should watch them in Africa, notes the Atlantic Council’s Africa Center director, Peter Pham. In Putin’s fourteen years at the center of power in Moscow, he has methodically revived a robust, strategic push for influence in sub-Saharan Africa that Russia abandoned in the 1990s under President Boris Yeltsin.

Over the past decade, Pham notes, Russia has drawn on its reservoir of experience and contacts from the Soviet era to develop political, military and economic links to an array of African leaders. (Unsurprisingly, some of these are no more dedicated to democratic norms than is the Kremlin.) And Moscow has drawn on more recently developed expertise in oil and gas exploration to forge ties with Algeria. That evolution gives the two countries together potential control over as much as 40 percent of Europe’s natural gas supplies.

A strategic rationale for Russia’s Africa policy is that the fifty-four African states make up the largest geographic bloc in any international organization in which they participate. So they represent a considerable potential political “reserve” for Russian foreign policy interests, especially when Moscow chooses to oppose the Western powers, as it has done so dramatically over Ukraine.

Russian moves in Ukraine, Georgia and Syria reflect the willingness of the Kremlin in an earlier era to use all the tools at its disposal to project its influence in pursuit of its strategic interests. While Russia’s objectives in Africa are far more limited than in its “near abroad,” its pattern of persistence in pursuing them is similar.