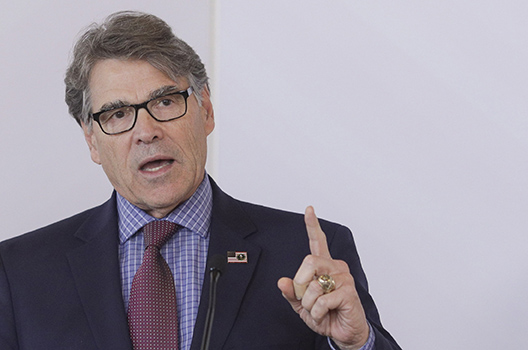 Europe’s dependence on Russian natural gas “is truly a cause for concern,” Perry said in remarks at the closing session of the Three Seas Initiative’s Business Forum in Bucharest on September 18.

Perry also affirmed US President Donald J. Trump’s opposition to the Nord Stream 2 pipeline, which will deliver gas from Russia across the Baltic Sea to Germany and Western Europe. Supported by Berlin, Nord Stream 2 received an endorsement from Austrian President Alexander van der Bellen at the first day of the Three Seas summit on September 17. Central European countries and the United States oppose the project.

Twelve nations—Austria, Bulgaria, Croatia, the Czech Republic, Estonia, Hungary, Latvia, Lithuania, Poland, Romania, Slovakia, and Slovenia—have signed on to the Three Seas Initiative. Most of these nations depend on Russia for their energy needs.

Perhaps mindful of this fact, the energy secretary urged the assembled leaders to diversify their sources of energy—away from Russia. “We believe there is a great security in energy diversity—in a multiplicity of energy sources, types, and routes,” he said. “That is why the United States supports the core principle of energy diversification as a key pillar of the Three Seas Initiative.”

“Transatlantic energy security is fundamental to the national security of all of our nations,” he added.

Perry also said that he wanted “the countries of Central and Eastern Europe to know that they can count on the United States as a stable, reliable energy partner.”

“Today we can send a clear signal that the United States and Europe are open for business and ready to go,” he added.

The secretary said that new cooperation would specifically help with high-profile projects such as the completion of a North-South energy corridor, the completion of the Trans-Adriatic Pipeline, and the Krk liquified natural gas terminal.

The fact that these projects have the potential to connect Europe with new sources of energy, including US liquified natural gas and oil, makes “the Three Seas Initiative as important an endeavor as the North Atlantic Treaty Organization or the European Union,” according to Perry.

Retired Gen. James L. Jones, Jr., interim chairman of the Atlantic Council, agreed. “This effort will result in a greater tranatlantic partnership that will enhance our collective security and our future prosperity,” he said.

Perry announced the creation of the Partnership for Transatlantic Energy Cooperation. This new program will “strive to catalyze investment in critical infrastructure” within the twelve European Union member states that border the Baltic, Adriatic, and Black Seas, he said.

The Three Seas Initiative, which aims to develop critical transportation and energy infrastructure in Central Europe, wrapped up its summit in Bucharest on September 18. It was attended by leaders from all twelve member countries and representatives from the European Union and United States.

At the summit, member countries agreed to set up an investment fund for projects, established cooperation amongst member country chambers of commerce, and decided on a priority list of projects.

Jones said that the new steps will “put us on the pathway to operationalizing one of this century’s most important strategic concepts.” The list of priorities especially will help in “securing investment interest, EU structural funds, private financing, and expedited approvals for specific projects,” according to Jones.

Perry hoped that closer cooperation between the United States and the Three Seas countries would “raise these projects to the top of the political and economic agenda for their wider visibility and attractiveness,” to potential private investors. He noted that “the business community is ready for a return to a high-growth economic environment,” but “largescale investment capital by multinational corporations require investor confidence.”

Jones hoped that “US energy leadership, investment dollars, technological savvy, and commitment can play an important role in the Three Seas Initiative moving from theory to practice.”