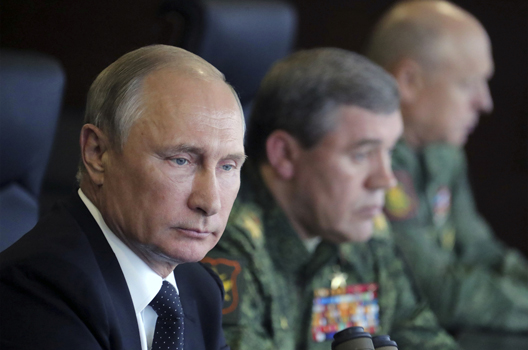 US President Donald J. Trump’s decision to withdraw the United States from the Iran nuclear deal may increase the prospects of instability in the Middle East. However, Russia is likely to interpret this instability through the prism of what many politicians and analysts in Moscow like to call the “approaching global confrontation with the United States.”

In April—just before the United States, France, and the United Kingdom launched airstrikes on Syria in response to a suspected chemical weapons attack by the Assad regime—members of the Duma, retired generals, and analysts in Moscow were convinced that the United States and Russia would come to blows over Syria.

Even before the airstrikes, Chief of General Staff of the Russian Armed Forces Gen. Valery Gerasimov announced in March that Russia would shoot down any US missiles fired at Syrian territory, and would target US aircraft and naval vessels if Russian forces were threatened.

When asked if the Russians were willing to sink a US aircraft carrier, my Russian interlocutors said “yes.”

The prevailing war hysteria in Moscow is worse than during the Cold War. After all, most of the 1970s were spent in the haze of “détente,” which culminated in the Leonid Brezhnev-Jimmy Carter triple kiss in Vienna.

In April, Russia-24 TV urged Russians to prepare for the worst, going as far as listing foodstuffs needed for nuclear shelters. It recommended rice, which can be stored for up to eight years, oatmeal, canned food, olive oil, and powdered milk.

According to Mark Schneider, a senior analyst with the National Institute for Public Policy, Russia is planning a massive program to construct nuclear blast shelters for the general population. It is also planning to expand and build new command bunkers.

A nationalist website, Pravda.ru, the “granddaughter” of the infamous Pravda Communist newspaper, recently published an article enumerating the “twelve signs of approaching war between the West and Russia.” These included the NATO military exercises in Estonia and Latvia, which kicked off on May 2; deployment of a US armored brigade in Poland; and the Anaconda military exercise in July—also in Poland.

Some Americans and Russians may dismiss such rhetoric as bluster. After all, when US forces decimated a private Russian military company in Deir Ezzor, Syria, in February the Kremlin did nothing.

Beyond that, Russia experts point out that the system of treaties between Moscow and Washington is deteriorating, and that contacts between the elites are in sharp decline. As the Duma and the Russian security services crack down on those who engage in contacts with the West, and as visas becomes more difficult with the closing of several consulates in both countries, fewer and fewer Russians and Americans are involved in joint business, political, and cultural activities.

Since Russia’s conventional military is weaker than that of the United States, the chances of nuclear escalation in a conflict between Russia and US/NATO are high. Russia simulated a limited nuclear attack on Poland in its massive Zapad military maneuvers in September 2017; it is what the Russian military doctrine of “escalation to de-escalate” proposes.

Therefore, if the Russians were losing a conventional war, they would use nuclear weapons to try to force negotiations. However, such an escalation might not be limited to one or two nuclear explosions, and could quickly get out of control, Buzhinsky warns.

The United States needs to craft its Russia policy in such a way as to achieve desired changes in Russian behavior. This includes rolling back Moscow’s adventurism in Syria and Ukraine, deterring Russia’s support of Iran, avoiding an all-out war, and improving communications with Russian elites and the general population.

It is crucial for the United States to effectively and clearly emphasize to the Russian public that the United States does not seek a war, occupation, or the dismemberment of Russia—the common allegations of the Kremlin’s propaganda.

To accomplish these policy goals, the Trump administration needs to expand its outreach to allies in Europe, ensuring that they fully cooperate on keeping in place the sanctions imposed on Russia after the annexation of Crimea and invasion of Donbas in 2014.

So far, the Trump administration has failed to get buy-in from its European allies for its opposition to major natural gas pipelines to Germany and Turkey. These pipelines would only buttress Russian domination of the European energy markets and provide a multi-year cash flow for the Kremlin.

The best way to avoid an all-out war is NATO’s transparent growth of conventional and nuclear deterrents, making any future Russian use of force costly. At the same time, Washington needs to boost its cyber counter-measures. Russia has already hacked not just the poorly protected US political servers, such as those of the Democratic National Committee and the Republican National Committee, but also the e-mail system used by the Joint Chiefs of Staff and the US nuclear infrastructure.

Finally, US efforts to communicate to the Russian elites and ordinary Russian citizens must be vastly amplified. This may include a US government-funded satellite television network; a deep reform in, and boost of, internet-based media in Russian by Russians; and support for expert interfaces through think tank-sponsored conferences, seminars, exchanges, etc.

A war with Russia in neither necessary nor inevitable. However, the current situation is reminiscent of the German Empire before World War I—with the same potential catastrophic consequences. To prevent this, US policy makers should recognize the central role of militarism in the Kremlin’s playbook, and then develop and implement a policy package to deter conflict.

Ariel Cohen is a nonresident senior fellow in the Atlantic Council’s Eurasia Center. Follow him on Twitter @Dr_Ariel_Cohen.