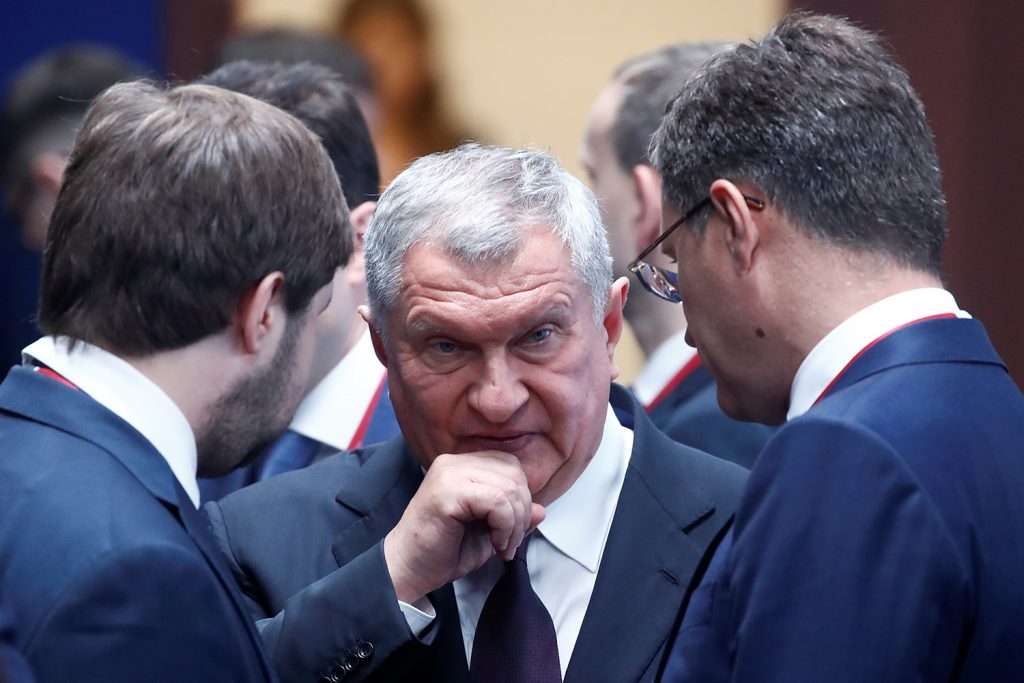 The root of the problem is that Russian President Vladimir Putin has too much power, which he has just enhanced through constitutional changes. This allows him to ignore the interests of the Russian people in favor of catering to the whims of his lieutenants, who are running amok with extraordinary wealth. The most harmful of Putin’s underlings is Igor Sechin, the chief executive of Rosneft—the second largest oil company in the world after Saudi Aramco in terms of production.

Sechin originally worked as an interpreter for the Soviet intelligence services in Portuguese Africa. But his outstanding qualification is his loyalty to Putin, having worked as the assistant of Russia’s current president in the St. Petersburg’s Mayor’s Office. As a result, Putin put Sechin in charge of Russia’s biggest state-owned oil company, where the Rosneft boss has stood out as Russia’s most ruthless corporate raider; he confiscated Yukos and Bashneft and purchased TNK-BP at a high price. Sechin’s business model is characterized by maximum risk-taking, which would not be possible without Putin’s allowance.

Russia’s war began two weeks after the global financial crisis (triggered by COVID-19) commenced, driving down the price of oil below $25 per barrel—the lowest since 2003. Since 2016, Russia had been cooperating with the Organization of the Petroleum Exporting Countries (OPEC). This entailed controlling oil prices via regulating output, something that Sechin always opposed and, thus, worked to change. The Russian government taxes oil companies so they pay all profits over a certain oil price in tax.

The oil price war marked the third time in six years that Sechin has jeopardized Russia’s macroeconomic stability, which Putin accommodates, even though much of the president’s pride and credibility comes from maintaining a healthy financial situation. Thus, Sechin is not only the main threat to Russia’s finances, but also to Putin’s hold on power in Russia.

A quick look into the prior occasions when Sechin compromised his country’s economy for his personal dealings makes for grim reading. In December 2014, Sechin caused a major currency crisis due to the excessive international loans he had taken to purchase TNK-BP. Since nobody punished him, he repeated a slightly smaller disaster exactly two years later. Then, he caused another currency crisis because he “privatized” almost one-fifth of Rosneft with its own bonds. The actual beneficiaries of this privatization have never been revealed, while the shares are hidden in several layers of offshore companies in the Cayman Islands. Sechin has also been responsible for Russia’s disastrous support to Nicolás Maduro and his dictatorship, providing Venezuela with $8.5 billion of credits.

Going back to 2006, Rosneft carried out an initial public offering, selling its shares on the London Stock Exchange. Unfortunately, as a result of that scheme, Rosneft’s shares cost less today than it did then. Based on this, any normal owner would have sacked such a harmful chief executive, but, given that the controlling owner of Rosneft is Putin, this is out of the question.

Despite Sechin’s brash and careless nature, some might argue for other factors as drivers of the current oil price war. One might reason that the Kremlin thought that it could get a better deal on production cuts with OPEC. The second issue is structural. Both Russia and Saudi Arabia are low-cost producers with a commercial interest in beating US shale oil producers, which could be hurt by lower prices. Though these might be correct assumptions, the ultimate reason for all of this is Sechin, who appears to be upset over the US sanctions against him. When Russia deployed its military into eastern Ukraine in July 2014, the United States and the European Union sanctioned Sechin as an individual in addition to Russia’s oil technology (deep offshore, tight oil, and Arctic offshore). On December 2019, the United States sanctioned Nord Stream 2, Gazprom’s gas pipeline from St. Petersburg to Germany through the Baltic Sea, and, on February 2020, did the same to Rosneft Trading S.A. because of Russia’s support for Venezuela.

The Kremlin sees US President Donald J. Trump as the most cooperative president they will ever have in the White House, but the US Congress tied his hands by adopting the Combatting America’s Adversaries Through Sanctions Act (CAATSA) in 2017. This made it so that the US president can no longer relax sanctions on his own. Needless to say, Russia has also alienated Saudi Arabia through its engagement in the Middle East, particularly by aligning with Iran in Syria.

Nevertheless, despite these tensions, this oil price war conflict is hardly related to national interests and can be best understood as a fight between Sechin and Mohamed bin Salman. The outcome of their squabble will be costly for their countries and for US shale producers. Both Saudi Arabia and Russia have plenty of international currency reserves and their leaders will likely maintain macroeconomic balance. However, Russia’s economy will probably shrink due to the lower oil prices, which does not seem to be understood in the Kremlin. When that happens, Putin is likely to slap Sechin on the wrists, as he has been prone to doing from time to time.

Anders Åslund is a senior fellow at the Atlantic Council and the author of “Russia’s Crony Capitalism: The Path from Market Economy to Kleptocracy”

US President Donald J. Trump’s administration has found it challenging to maintain a consistent position with respect to Russian President Vladimir Putin’s repression at home and aggression abroad.