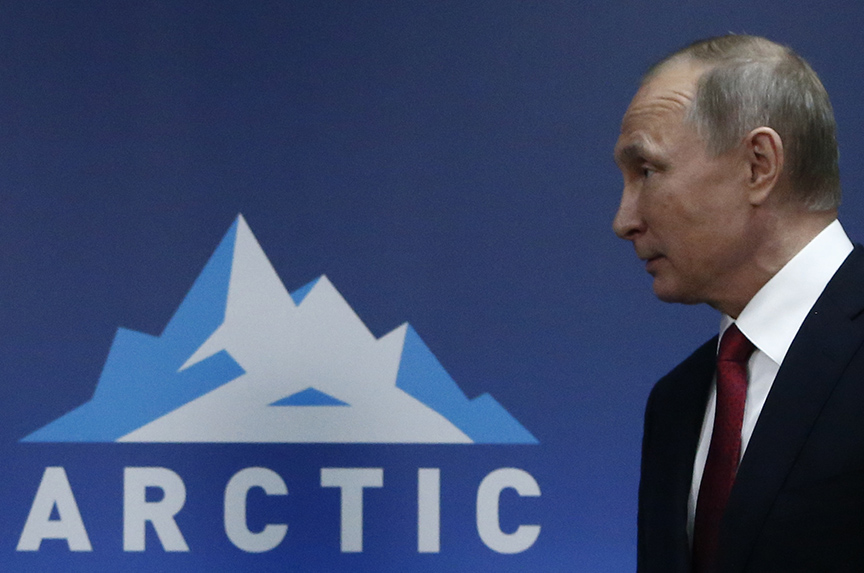 Russia has poured billions of dollars into infrastructure projects to strengthen its military foothold in the Arctic. It is widely assumed that this has been done to establish greater leverage over the fossil fuels that lie beneath the ice. However, the problem with this line of thought is that it is based on exaggerated expectations about the region’s energy potential. In fact, due to a combination of poor exploration data, high extraction costs, and potential environmental risks, the Arctic is likely to remain a rather desolate place for years to come.

The Arctic has always played a significant role in Russia’s geopolitical vision. In tsarist times, it provided an enormous military buffer which ensured that no country could flank it from the north. During the Soviet-era it was home to Moscow’s nuclear submarine fleet. Nowadays, the region promises enormous fortunes as it reportedly holds vast quantities of untapped oil and gas resources.

Most of the Arctic is administered by the United Nations International Seabed Authority, and no single country can exercise exclusive jurisdiction over it. However, Russia has been determined to claim huge chunks of the territory for itself. In 2007, Moscow staged a public relations stunt by planting a Russian flag at the bottom of the Arctic Ocean in the North Pole and in 2015 it staked a claim at the United Nations for 1.2 million square kilometres of territory that constitute almost a quarter of the whole region. More recently, in March, Russian President Vladimir Putin himself travelled to the Arctic to reaffirm Russia’s foothold in the area.

At the same time, Moscow reinforced its territorial claims by pursuing an active militarization campaign in the High North. Over the past few years, Russia has restored a number of Soviet-era military installations, built new bases and is considering establishing at least four more in the near future. Moreover, in 2019, Moscow will commission the world’s largest nuclear icebreaker—Arktika—that will lead its already formidable 40-strong fleet of icebreakers.

While in theory all this might indicate that Russia is poised to secure access to the great fossil fuel riches of the Arctic, in practice this is not entirely the case.

Alternatively, Russia could experience the same fate as the energy company Shell, which spent over $7 billion on its hunt for fossil fuels near Alaska, but abandoned the project after it failed to find enough resources to justify further exploration.

Furthermore, given the harsh weather conditions and lack of infrastructure, drilling in the Arctic is extremely expensive. While it is possible to profitably extract oil from conventional sources in the Urals-Volga region when the price of oil stands at around $20-30 per barrel, Moscow would need much more than that for exploring the Arctic. Provided it acquires the necessary technology, Russia could start profitably drilling in shallow Arctic waters if the price of oil would reach $60-80 per barrel, but it would need more than $110 per barrel to even consider venturing into deep Arctic territory. Since the price of oil has currently stabilized at around $48 per barrel and most forecasts agree that it will remain relatively low for the foreseeable future, the likelihood of a great oil rush in the Arctic remains slim.

Environmental risk is also a major factor that makes Arctic energy exploitation rather unlikely. Although major oil spillages happen rarely, they nonetheless are one of the factors that energy companies need to consider. A major oil spill like the one that happened in the Gulf of Mexico in 2010 and caused an estimated total damage of $61.6 billion to the energy company BP, would have much more devastating consequences in the High North. The severe cold, sea ice, and harsh storms would inflate the costs of a potential oil spill and could financially cripple even Russia’s largest energy companies.

While there are some doubts about the willingness and ability of Russia’s energy companies to meet exacting environmental standards, the same could not be said about most Western energy companies on whom Moscow would have to rely for capital-intensive projects in the High North. The potential backlash from governments and non-state actors in case of an oil spill in the waters of the Arctic makes environmental disasters a matter of significant concern for many companies who would want to do business with Russia. Besides, there are plenty of low-risk, high-reward oil and gas investment opportunities scattered all across Africa, Latin America, and Central Asia, which renders the Arctic a less attractive venture destination.

For all these reasons, Russia’s militarization of the Arctic does not appear to be driven by energy.  Rather, it appears to be motivated by a combination of short- and long-term factors. Moscow wants to create the impression of Russia being a “Northern” military power, which plays well for domestic and international public relations purposes. It also wants to be ready for the day when the Northern Sea Route between Europe and Asia opens up and the Arctic will become a global shipping hub.

In sum, Russia’s increasing focus on the Arctic will unlikely result in the pristine white landscape being peppered with drilling rigs anytime soon. The uncertainty of what actually lies beneath the ice, the high-extraction costs, and the looming environmental risks in case of an oil spill—all make the Arctic an unlikely success story for the Russian energy industry. As a result, Russia’s military outposts in the High North will be the only inhabited structures in this cold, dark, and forlorn place—at least for the foreseeable future.

Lukas Trakimavičius is an intern in the Energy Security Section of NATO’s Emerging Security Challenges Division. The views expressed in this article are the author’s own and not necessarily those of the North Atlantic Treaty Organization.