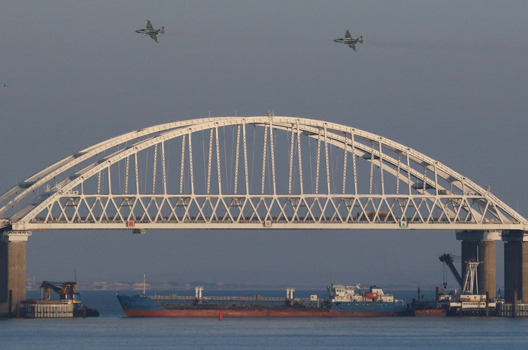 Escalating tensions between Russia and Ukraine in the Sea of Azov bear eerie echoes of Russian provocations that led to the war with Georgia in the summer of 2008.

“For months, Russian forces have been working to make the Azov Sea an internal Russian body of water in order to both cut off Ukraine’s eastern ports and cement Moscow’s hold on Crimea,” said Damon Wilson, executive vice president of the Atlantic Council.

“Moscow’s incrementalist approach is like the ‘creeping annexation’ we witnessed in Georgia in 2008—any single move tends not to be dramatic, but in the aggregate Russia makes strategic gains. Today, the Russians escalated with the aim of intimidating Ukraine into backing off its own effort to assert its access to its own territorial waters and its own ports,” he added.

Tensions between Ukraine and Russia dramatically escalated on November 25 with Kyiv saying a Russian coast guard vessel had rammed its navy tugboat in the Sea of Azov, that Russian forces had fired on its vessels injuring six crewmembers and captured three Ukrainian naval vessels.

The incident happened when two Ukrainian navy artillery boats and a tugboat were traveling from Odesa on the Black Sea to Mariupol in the Sea of Azov via the Kerch Strait, a narrow passage between the Crimean Peninsula and Russia.

Ukraine’s Foreign Ministry said: “Russia’s provocative actions in the Black Sea and the Sea of Azov have crossed the line and become aggressive.”

“Russian ships have violated our freedom of maritime navigation and unlawfully used force against Ukrainian naval ships,” it added.

Moscow accused the Ukrainian vessels of passing through its territorial waters without permission and shut off access to the Sea of Azov. Ukrainian President Petro Poroshenko said he would propose that parliament declare martial law in the country in response to the situation. [Update: Poroshenko said on November 26 that he would impose thirty days of martial law starting on November 28.]

“For those who follow Kremlin policy in its neighborhood, this  looks dangerously familiar,” said John E. Herbst, director of the Atlantic Council’s Eurasia Center.

“Moscow committed provocations against Georgia for years:  military overflights, random missiles landing in Georgian territory and, of course, firing across the internal demarcation line between parts of Georgia hosting Russian troops and the rest of Georgia.  Such firing from South Ossetia led to the Russia-Georgia war in 2008,” he explained.

Alexander Vershbow, a distinguished fellow in the Atlantic Council’s Scowcroft Center for Strategy and Security, said Russia’s actions “can only be seen as premeditated acts of aggression aimed at destabilizing Ukraine in the run-up to Ukraine’s 2019 elections.”

“Russia has been intensifying the pressure on Ukraine over the past three to four months in small steps, similar to what we saw in Russia’s creeping aggression against Georgia in the spring and summer of 2008.  These steps include the incessant artillery and rocket attacks on Ukrainian civilians by Russian-led forces in occupied Donbas, interference with international shipping to and from Ukraine’s Azov sea ports of Mariupol and Berdyansk, the imposition of sanctions on Ukrainian companies and pro-Western business leaders, and the holding of illegal elections in occupied portions of Donetsk and Luhansk districts in violation of the Minsk agreements,” said Vershbow, who served as the US ambassador to Russia from 2001 to 2005.

“Moscow seems determined to show that Ukraine is a failed state that cannot defend its own borders in the hope of bringing more malleable leaders to power in Kyiv and reversing Ukraine’s rapprochement with the EU and NATO,” he added.

Michael Carpenter, a nonresident senior fellow with the Atlantic Council’s Eurasia Center, said Russia’s actions are “part of a larger Russian strategy to gain control over the Azov Sea and blockade Ukrainian maritime traffic in and out of the Kerch Strait.”

“This move is clearly a violation of international law and adds a new dimension to Russia’s four-and-a-half-year-old war against Ukraine,” he added.

Responding to the crisis

The crisis in the Sea of Azov has erupted on the eve of US President Donald J. Trump’s meeting with Russian President Vladimir Putin at the G20 summit in Buenos Aires on November 30 and December 1.

“Russia’s aggression and its challenges to Ukrainian sovereignty are a test for the United States and Europe,” said Vershbow. “Thus far, Russia’s escalating pressure has been met only with rhetorical condemnation by the United States and the EU. If the latest attacks and illegal seizure of Ukrainian ships bring little more than a slap on the wrist, Putin will see this as a green light for further escalation, to include a full blockade or even the illegal annexation of the Azov Sea.”

The United States and the EU need to impose “real costs” on Russia if it doesn’t reverse course, including tighter economic sanctions beginning with the suspension or cancellation of the Nordstream 2 pipeline, said Vershbow, referring to the natural gas pipeline from Russia to Germany. “The United States and its allies should also expand NATO’s naval presence in the Black Sea and consider increased support to the Ukrainian navy,” he added.

“So far, the US government has been silent about Russia’s latest acts of aggression against Ukraine. President Trump has promised  to be tougher than his predecessor, who allegedly ‘let Russia take Crimea.’  Will Trump now let Russia take the Azov Sea as well,” Vershbow asked.

Carpenter said the United States should “respond immediately by giving Ukraine radars to boost its maritime domain awareness and land-based anti-ship missiles so it can defend its Azov Sea littoral.”

“The United States should also impose a complete asset freeze on at least one major Russian bank, such as Sberbank, VTB, or Gazprombank. The sanctioning of a Russian bank—or several banks if Russia fails to respond initially—should be made conditional on Russia restoring Ukraine’s access to its own ports and withdrawing its troops from the Donbas. Until this happens, the costs on the Kremlin should continue to mount,” he added.

Anders Åslund, a resident senior fellow in the Atlantic Council’s Eurasia Center, said: “NATO and the United States should send in naval ships in the Sea of Azov to guarantee that it stays open to international shipping.”

Such action, Åslund said, “would be in full compliance with the UN Law of the Sea Convention of 1982 and the Montreux Convention Regarding the Regime of the Straits of 1936.”

Åslund said Ukraine was right to protest the November 25 incident. “The United States, NATO, the European Union, and all major Western countries should protest sharply against this violation of the freedom of the sea under several international sea conventions,” he said.

A European Union spokesperson, Maja Kocijancic, said the EU expects “Russia to restore freedom of passage at the Kerch strait and urge all to act with utmost restraint to de-escalate the situation immediately.”

NATO spokesperson Oana Lungescu said in a tweet: “NATO fully supports Ukraine’s sovereignty and its territorial integrity, including its navigational rights in its territorial waters.”

“We call on Russia to ensure unhindered access to Ukrainian ports in the Azov Sea, in accordance with international law,” she added.

Herbst said: “The same Moscow spokespeople who assured us in 2014 that the little green men who seized Crimea were not Russian soldiers—until Vladimir Putin himself spilled the beans weeks later—are now telling the world that volatile maneuvers  of Ukrainian ships led to the collision November 25.  Unfortunately for Moscow, Ukraine has evidence that Russian commanders ordered their ships to ram the Ukrainian tug.  This will all come out in the very near future.”

Ukraine said it had provided prior notice to Russia’s Federal Security Service (FSB) about the passage of its vessels. It accused Moscow of violating the UN Convention on the Law of the Sea and a 2003 treaty between Russia and Ukraine that designates the Kerch Strait and Sea of Azov as shared territorial waters.

Herbst described the collision of the vessels and Russia’s decision to close the Kerch Strait to all traffic, both military and commercial, as “a double provocation.”

These developments, Herbst said, were “the latest in a dangerous game that the Kremlin launched last April, when it began to ‘inspect’ commercial ships going to and from the Ukrainian ports of Mariupol and Berdyansk in the Sea of Azov.  Since then, the Russian navy has subjected well over 150 ships to inspections that slow down the movement of cargo and raise the cost of shipping to and from Donbas.”

Moscow has two objectives, said Herbst. “First, it would like to raise the cost on the Ukrainian economy.  Increased costs for shipping leads to higher prices, fewer exports, and less economic growth. That this hurts the eastern part of Ukraine, where more ethnic Russians live, is just an ironic afterthought for Kremlin strategists,” he said.

“The second objective is the effort to entice Ukraine into taking some sort of military action to protect shipping to and from its ports,” he added, noting that over the course of the year, Russia has greatly enhanced its presence in the Sea of Azov.  Russia now has eight naval vessels in this small sea.

The Sea of Azov has become a point of friction between Moscow and Kyiv since Russia seized Crimea in March 2014.

“Ever since Russia annexed Crimea in March 2014, it has prepared for turning the international Sea of Azov into internal Russian waters, blocking a large share of the Ukrainian coasts and two major commercial ports, Mariupol and Berdyansk,” said Åslund.

In May, Russia opened a bridge linking Crimea with Russian territories across the Kerch Strait.

Kocijancic, the EU spokesperson, said the construction of the bridge “took place without Ukraine’s consent and constitutes another violation of Ukraine’s sovereignty and territorial integrity. It has led, in parallel with the militarization of the Azov Sea, to tougher controls on naval traffic in the strait. The European Union expects Russia to stop the inspections.”

Russia blocked off passage through the Kerch Strait on November 25 by placing a huge cargo ship under the bridge.

Mariupol and Berdyansk are home to Ukraine’s two major steel- and grain-exporting ports on the Sea of Azov. These ports have experienced a significant decline in cargo due to the low height of the bridge. An RFE/RL report, citing official statistics, found “144 ships that rise taller than its 33-meter clearance can’t reach the Port of Mariupol, resulting in a 30 percent loss in revenues for the port.”

In August, the US State Department condemned “Russia’s harassment of international shipping in the Sea of Azov and the Kerch Strait.”

State Department spokeswoman Heather Nauert said “Russia’s actions to impede maritime transit are further examples of its ongoing campaign to undermine and destabilize Ukraine, as well as its disregard for international norms.”

Image: Russian fighter jets flew over a bridge connecting the Russian mainland with the Crimean Peninsula on November 25. A Russian cargo ship blocked passage under the bridge after three Ukrainian navy vessels were stopped by Russia from entering the Sea of Azov via the Kerch Strait in the Black Sea on November 25. (Reuters/Pavlishak Alexey)