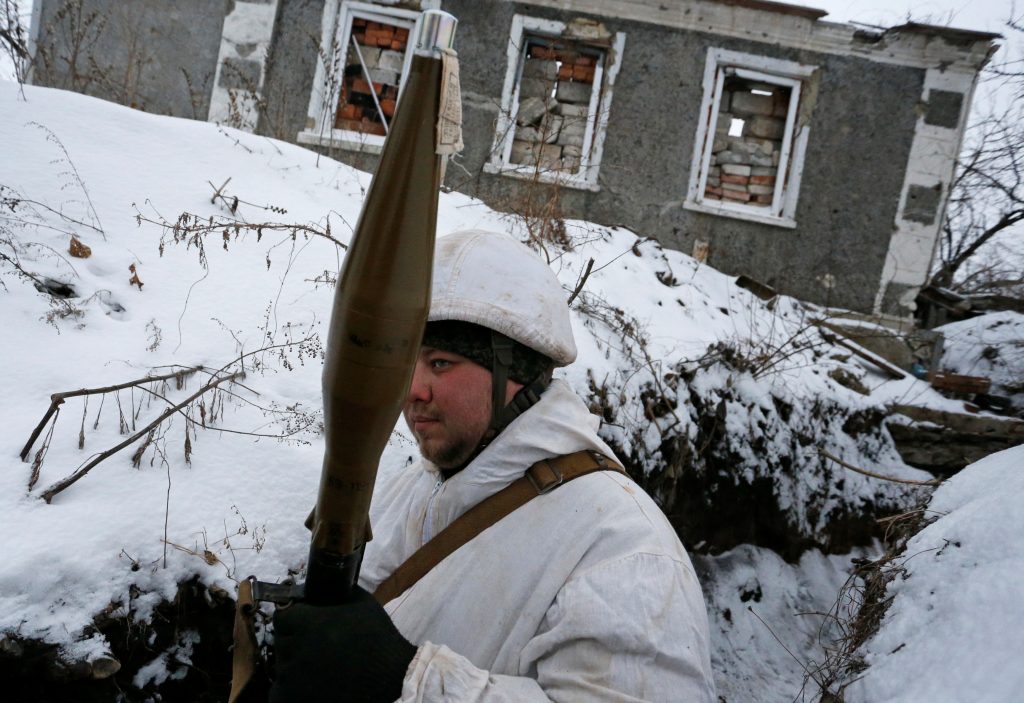 As the crisis in Europe over Ukraine heats up, the Atlantic Council’s Digital Forensic Research Lab (DFRLab) is keeping a close eye on Russia’s movements across the military, cyber, and information domains. With more than five years of experience monitoring the situation in Ukraine, as well as Russia’s use of propaganda and disinformation to undermine the United States, NATO, and the European Union, DFRLab’s global team presents the latest installment of the Russian Hybrid Threats Report.

Lukashenka says Belarus would go to war if attacked, as Russia transports blood and food supplies near Ukraine border

Lukashenka says Belarus would go to war if attacked, as Russia transports blood and food supplies near Ukraine border

On January 28, Belarusian President Alyaksandr Lukashenka said in a televised address that Belarus would go to war if attacked. He confirmed that Belarus would also support Russia if it were attacked, promising to host “hundreds of thousands” of Russian troops in the event of war.

On January 29, new open-source evidence suggested that Russia is continuing its military build-up in Belarus and its own territory along Ukraine’s borders. Satellite imagery and videos shared on social media indicated that the Russian military moved blood supplies and other medical aid. Additional movements of troops, missiles, and essential supplies like food were also reported along Ukraine’s border.

On January 26, the head of the ruling United Russia party in the State Duma expressed support for sending weapons to Ukrainian separatist regions Donetsk and Luhansk. Vladimir Vasiliev said his party is “very concerned about the issue of protecting the lives of Russian citizens and compatriots living in the territories of the LPR [Luhansk People’s Republic] and DPR [Donetsk People’s Republic].”

Andrey Turchak, secretary of United Russia’s general council, claimed that Kyiv is preparing a military attack on the separatist regions and that Russia must assist in deterring aggression from Ukraine. He cited the delivery of British and American anti-tank missile systems and grenade launchers as evidence that Kyiv is preparing to attack Donetsk and Luhansk. This claim is misleading, however, as Ukraine has only received defensive weapons from the United Kingdom and United States.

Andrei Gurulev, a member of Russia’s State Duma defense committee, told Interfax that Russia should also consider supplying mines to Donetsk and Luhansk to help prevent an invasion using armored vehicles. And Viktor Vodolatsky, deputy chairman of the State Duma committee on relations with neighbors, said that military aid would arrive within hours if President Vladimir Putin approved the decision to supply arms to Donetsk and Luhansk.

It appears the United Russia party did not hold consultations with other stakeholders before announcing its support for supplying weapons to Donetsk and Luhansk. Dmitry Kozak, Putin’s deputy chief of staff, argued that United Russia did not consult him before requesting the arms shipments, but he added that if other countries are arming Ukraine, then a logical question arises why Donetsk and Luhansk should not be supported.

Russia has covertly supplied weapons and military equipment to the separatist regions since 2014. Multiple organizations have spotted various types of Russian weapons in Donetsk and Luhansk.

On January 27, Vasily Golubev, governor of Russia’s Rostov region, told reporters that 720,000 people from the so-called Luhansk and Donetsk people’s republics have received Russian passports. At the same time, Putin ordered the State Duma to consider providing an opportunity for Russian passport holders in the separatist regions to apply for public benefits through Russia’s state service system. Meanwhile, Vodolatsky claimed that residents of the Ukrainian breakaway regions could be drafted into Russia’s armed forces if they have registered themselves on Russian territory.

On January 31, RIA published a piece criticizing media organizations in the United States and the United Kingdom, saying their reporting doesn’t “intersect with reality,” and that “the media controlled by [Western] oligarchs are making a fuss about an aggressive Russia.” The article, written by Victoria Nikiforova, contended that the United States sees a Russia-Ukraine war as a “means of saving the American economy” by allowing the media and Pentagon contractors to expand their budgets. In addition, the piece criticized the United States for making energy deals with Europe. This is a continuation of a narrative that the cessation of conflict between Ukraine and Russia is disadvantageous for the United States.

Similar attacks on the quality and credibility of the Western media appeared on anonymous Telegram channels, some of which the Ukrainian Security Service previously identified as connected to Russia. The channels claim that Western journalists “imagine a mythical military invasion” and publish any “trash” without fact-checking. The Economist, the Washington Post, Reuters, Forbes, and the Guardian are among the ridiculed media. Previously, the Russian Ministry of Foreign Affairs pushed similar narratives suggesting “excitement” in Western media over Ukraine had “reached the stage of insanity.”

Elsewhere, multiple Russian media outlets amplified a narrative shared by the so-called People’s Police of the Luhansk People’s Republic that argued Ukraine is creating staged videos of a Russian attack. This comes two months after a Russian disinformation campaign used a staged video to allege that Ukraine’s border patrol forces were shooting refugees.

Coordinated networks of Twitter accounts are increasingly amplifying anti-Ukraine, anti-US, and anti-NATO disinformation and propaganda, according to a report from Mythos Labs, a platform focused on countering mis- and disinformation.

Using artificial intelligence software, Mythos Labs identified a network of 153 Twitter accounts, retweeting from a common set of seventeen source accounts, posting an exceptionally high volume of tweets related to Russian military aggression against Ukraine. Mythos Labs grouped the accounts based on the narratives they spread and found a cluster of fifty-eight accounts specifically spreading anti-US and anti-NATO narratives while promoting Russian interests.

According to the report, the activity of the Twitter network increased more than 3,300 percent in November 2021, when the accounts tweeted disinformation and propaganda targeting Ukraine an average of 213 times a day. By comparison, the accounts tweeted six times per day between January and October 2021.

Pro-Kremlin outlet Lenta.ru interviewed Boris Yulin, a Russian war historian, who said that too much pressure on Moscow would leave China to face the United States alone. He argued that it benefits China to align with Russia, ensuring the two countries have a partner when taking on the United States.

Pyetr Akopov, an author for the Kremlin-owned RIA Novosti, wrote a similar opinion, republished on Sputnik Latvia. Akopov referenced Victoria Nuland, the US undersecretary of state for political affairs, urging China to use its influence with Russia to address Ukraine. In the piece, Akopov argued that Nuland “humiliated” herself with this request because Beijing supports Moscow’s security demands. He referred to an official statement from the Chinese Foreign Ministry, which said, “To solve the Ukrainian issue, it is necessary to return to the starting point of the Minsk-2 agreement.” He also stated that the United States is as hostile towards China as it is to Russia.

Lastly, pro-Kremlin outlet Putin Today republished a translated opinion piece from Zhang Hong, a research fellow at the Institute of Russia, Eastern Europe, and Central Asia. Hong portrayed the Kremlin as patient and seeking to improve relationships with the United States, who, he argued, “kept the Cold War mentality” and is now “provoking a security crisis.”

Multiple Kremlin-controlled media outlets spotlighted Hungarian Defense Minister Tibor Benke saying that Hungary does not need additional NATO troops since there is no immediate threat to its security. Benke made the statement on Hungary’s InfoRadio in response to a CNN report claiming that Romania, Bulgaria, and Hungary are among the countries considering accepting NATO troop deployments.

Additionally, Kremlin-controlled media picked up on Benke saying that Hungary initially supported Ukraine’s admission into NATO but changed its opinion after Ukraine “did not provide the same rights to Hungarians living in the Transcarpathia region as Hungary provided to Ukrainians living in Hungary.” Benke was possibly referring to Ukrainian special forces searching the offices of Hungarian non-governmental organizations in Transcarpathia in 2020. Outlets like PolitEkspert and News Front emphasized Benke’s statement about Ukraine’s admission to NATO.

Discussion around the Georgian Dream party’s draft resolution over the Ukrainian crisis continues. The DFRLab previously reported that the resolution underwent harsh criticism for not mentioning Russian aggression. In an interview with Georgian Public Broadcasting, Giorgi Khelashvili, a party member and deputy chair of the Foreign Relations Committee, said Russia was not mentioned because Ukraine’s situation is extremely tense. He said the party did not want to create an “unnecessary provocation” that could worsen Russian aggression. This aligns with a comment from Mamuka Mdinaradze, one of the leaders of the party, who said that the resolution text avoided “populist and provocative rhetoric.”

A Sputnik Georgia article argued that the United States is a warmonger, and there is no Russian military presence in Ukraine. The author claimed that the United States is trying to destroy Ukraine’s economy by dragging it into military conflict. Another Georgian pro-Kremlin outlet, affiliated with the disinformation publisher News Front, furthered the narrative about Ukraine’s economy suffering by claiming “US fairy tales about a Russian invasion have cost the Ukrainian economy twelve billion dollars.” The article also blamed US media for spreading “fake” information to increase tensions along the Ukrainian border and frighten foreign investors.

Image: A militant of the self-proclaimed Luhansk People's Republic carries a grenade launcher at fighting positions on the line of separation from the Ukrainian armed forces in the village of Zholobok in Luhansk Region, Ukraine, on January 25, 2022. (Photo by Alexander Ermochenko/Reuters.)