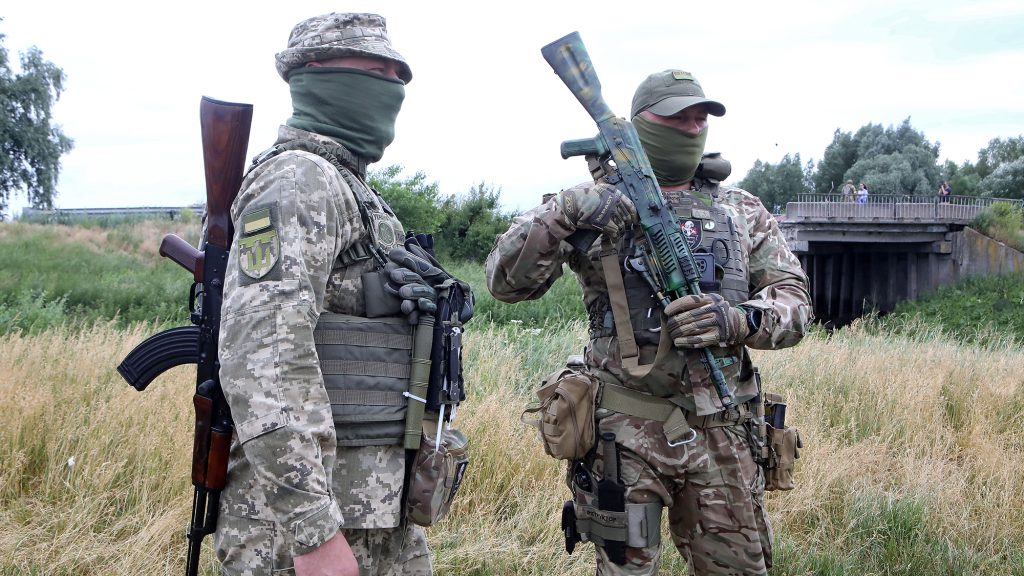 Russian officials are spreading the newest iteration of the conspiracy that suggests the United States is running secret biolabs in Ukraine, this time suggesting that Ukraine has created experimental “monster” troops. This appears to be an attempt to justify Russian failures in Ukraine.

Russian state media outlet Kommersant reported that on July 18, Russia’s Federation Council held a regular meeting of the parliamentary investigative committee on US biological laboratories operating in Ukraine. Committee cochairs Konstantin Kosachev and Irina Yarovaya, who also are vice speakers of the Federation Council and the State Duma, revealed the latest “findings from the investigation.” According to the cochairs, a blood test of Ukrainian soldiers showed that they were subject to “secret experiments,” which turned them into “the cruelest monsters.”

Kosachev explained, “For a number of diseases, including those atypical for the territory of Ukraine, the content of the relevant substances is many times higher than the permissible norms.” This suggested that Ukraine is experimenting with “extremely dangerous diseases” which could be distributed for “military purposes.”

Yarovaya also accused the United States of running a system that produces “killing machines.” This, she suggested, explained why Ukrainian soldiers commit “cruelty and atrocities,” including crimes against civilians and prisoners of war. Yarovaya added that the experiments “neutralize the last traces of human consciousness and turn them into the most cruel and deadly monsters.”

Some Kremlin-aligned and fringe news outlets published stories about the conspiracy. They all cited Kommersant as the source.

The Kremlin has employed a variety of biochemical disinformation narratives to justify Russia’s war in Ukraine.

A Telegram channel for a troop of Russian nationals who are against the invasion of Ukraine has alleged that Russian President Vladimir Putin is oppressing minorities in ethnically non-Russian republics.

The Freedom of Russia Legion, fighting under the Ukrainian Army, describes itself as wanting to “fight for Russia against the Putin regime in Ukrainian military uniforms with symbols of our new Russia.” It has posted about Putin’s regime oppressing ethnic Maris, Tatars, Kalmyks, Avars, and Buryats. In its posts, the channel claims that people of non-Russian ethnicities are being discriminated against, and it argues for an anti-imperialist future.

The idea of “de-imperializing” Russia is expected to be a key topic at the Forum of Free Nations in Russia, which is being held from July 22 to 24 in Prague. The forum plans to ratify its Declaration on Decolonization of Russia, which demands independence for ethnically non-Russian nations and republics from the Kremlin.

Last month, the United States Commission on Security and Cooperation in Europe (CSCE) held a public panel discussion titled “Decolonizing Russia.” Three weeks later, on July 17, the topic was addressed by Dmitry Kiselev, a presenter on the Kremlin propaganda channel Rossiya 1 and the head of Kremlin-owned Rossiya Segodnya media group. During his weekly news show, Kiselev cited Russian journalists and political commentators who support the idea of Russia being divided into different parts. He referred to CSCE’s discussion as a “project,” implying that the United States already had plans to divide Russia. Kiselev’s show also played a Putin speech in which the Russian president said the goal of the West is to “split Russia” and make it “weak and dependent.”

Some Russian soldiers who have died in Ukraine have come from non-ethnically Russian regions, such as Dagestan and Buryatia, Important Stories reported. On July 17, Mediazona, an independent Russian media outlet, wrote about the pressure that Buryat soldiers faced when trying to terminate contracts with the Russian Army. The following day, the Moscow Times wrote about three hundred Dagestani soldiers who wanted to terminate their contracts due to the insufficient provision of uniforms, supplies, and “weapons that turned out to be faulty.” Some of the soldiers managed to terminate the contracts, while others were brought back to war zones.

On July 14, the right-wing Polish political party Confederation of the Polish Crown, which holds eleven seats in parliament, presented a legislative proposal to the Sejm titled “Stop Ukrainization of Poland.” According to party leader Grzegorz Braun, the document proposes legislative initiatives to “protect” Poland from “ethnic, political, and perhaps territorial disintegration” amid the massive influx of Ukrainian refugees.

The document makes several unsubstantiated anti-Ukraine and anti-immigration statements, claiming that the influx of Ukrainians poses a threat to Polish sovereignty and creates ethnic and cultural divisions in the country. The bill proposes that Ukraine, Russia, and Belarus be removed from the list of official minorities in the census of national minorities, making it more difficult for them to obtain Polish citizenship. The bill claims that the large presence of Ukrainians in Poland may trigger a struggle between the different nationalities, as it claims it would be very difficult for Poles to live peacefully in a country where Ukrainians are the largest minority group. The authors of the bill also requested that parliament adopt an antidiscrimination law to protect Poles from minorities.

The proposal also recycles bigoted accusations that Ukrainians are inherently violent by asserting that the number of homicides in Ukraine is eight to ten times higher than in Poland and that the potential arrival of violent Ukrainian men with fresh combat experience would significantly increase the crime rate in Poland. Against this backdrop, the bill recommends Poland close the Poland-Ukraine border when Ukraine lifts its ban on men of conscription age leaving the country. It warned that Ukrainians could displace Polish people from the labor and housing market, and that the arrival of Ukrainians increases the risk of epidemiological threats in Poland such as HIV/AIDS and tuberculosis.

The DFRLab used CrowdTangle to analyze mentions of “Stop Ukrainizacji Polski” (“Stop Ukrainization of Poland”) in public Facebook groups and pages and found sixty-three posts mentioning the phrase. The posts garnered over 3,800 interactions from July 14 to 20.

The bill was presented during a meeting of the Parliamentary Group for International Relations and the Interests of Poland and the Polish Diaspora, established by Confederation of the Polish Crown party members in 2020. During the presentation, party member Wojciech Siński claimed that Russia is not hostile to Poland because the two countries have no territorial disputes and Poland lacks a significant Russian minority population. He also asserted that it is in Poland’s interests to prevent the war from spreading to other countries. Notably, the document does not once mention Russia by name.

On July 19, Anton Gerashchenko, an adviser to Ukraine’s Interior Ministry, reported that Ukrainian forces had struck a key bridge in Russian-controlled Kherson. Gerashchenko claimed the attack was carried out with US-supplied high mobility artillery rocket system missiles (HIMARS). The attack targeted the Antonovskiy bridge, south of Kherson. It is one of the main supply bridges used by Russian forces to cross the Dnipro River.

On July 20, reports of a second attack on Antonovskiy bridge surfaced. Kremlin media outlet TASS reported that ten to twelve HIMARS missiles had struck the bridge. In the article, Kirill Stremousov, deputy head of the Russian-backed administration currently running the Kherson region, claimed that the bridge “is repairable, but will require time. We will probably have to block traffic… There are no casualties.” Russian media asserted that Russian air defense systems managed to take down ten HIMARS missiles, though they failed to present any evidence to back up this claim.

The areas of impact visible in the satellite imagery correspond with a video posted on July 19 that shows an impact near the end of the bridge.

Videos taken from the bridge also confirm that the attack was successful as several large craters are visible on the bridge.

Whether the tactical goal of the attack was reached is debatable, as Ukrainian forces were unable to destroy the bridge despite two days of successfully hitting it with missiles.

This attack suggests that HIMARS can be used to target high-value targets with a high amount of precision. To date, the Ukrainian military has primarily used HIMARS to attack Russian frontline ammunition dumps.

Russian football fans are boycotting football matches of the Russian Premier League (RPL) amid the introduction of a mandatory Fan-ID personal verification system required for entry into sports stadiums. On July 19, pro-Kremlin media outlet RBC reported that the number of fans attending the first tour of the RPL season was one-third of attendance during the 2019–2020 season. Fans of fifteen out of the sixteen football clubs announced that they intended to boycott onsite games until the requirement to obtain the Fan-ID was lifted.

The law requiring documentation to enter sporting events passed on December 30, 2021, and went into force on June 1 of this year. The stated goal of Fan-IDs is “ensuring the security of the state, public safety, and order.”

Fan-ID was first introduced during the Sochi Winter Olympics in 2014, then used again during the 2017 domestic Confederations Cup and the 2018 World Cup. Previously, football fans reported their Fan-IDs would decline their entrance for no specific reason. Some fans speculated without evidence that this was because the ID holders had attended an anti-Kremlin protest or worked as a journalist or lawyer.

The DFRLab did not identify any coordinated attempts by Kremlin media to convince football fans of the merits of Fan-ID. The only noteworthy publication, by Kremlin-approved media outlet Vedomosti, compared how similar technologies had been introduced in countries such as Italy, Turkey, and Mexico. 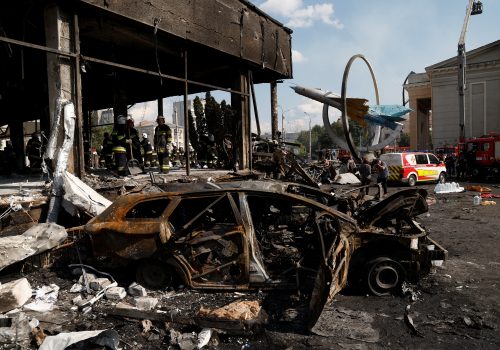 Russian forces launched a missile attack on the Ukrainian town on Vinnytsia, Russia's public death toll grows, and Iran's coverage of the war. 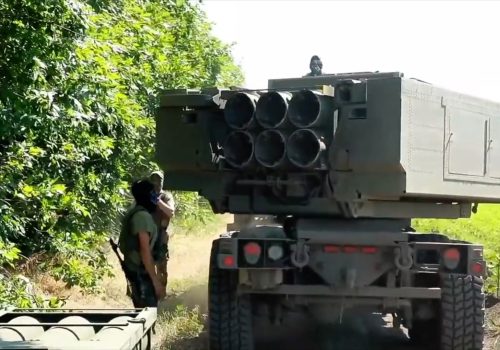 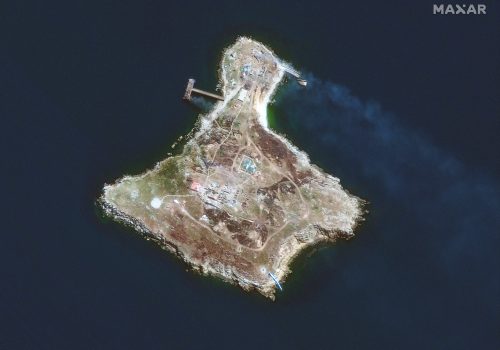 Plus, Russian diplomatic accounts spread a questionable story about anti-Russian stickers placed at an Auschwitz memorial.