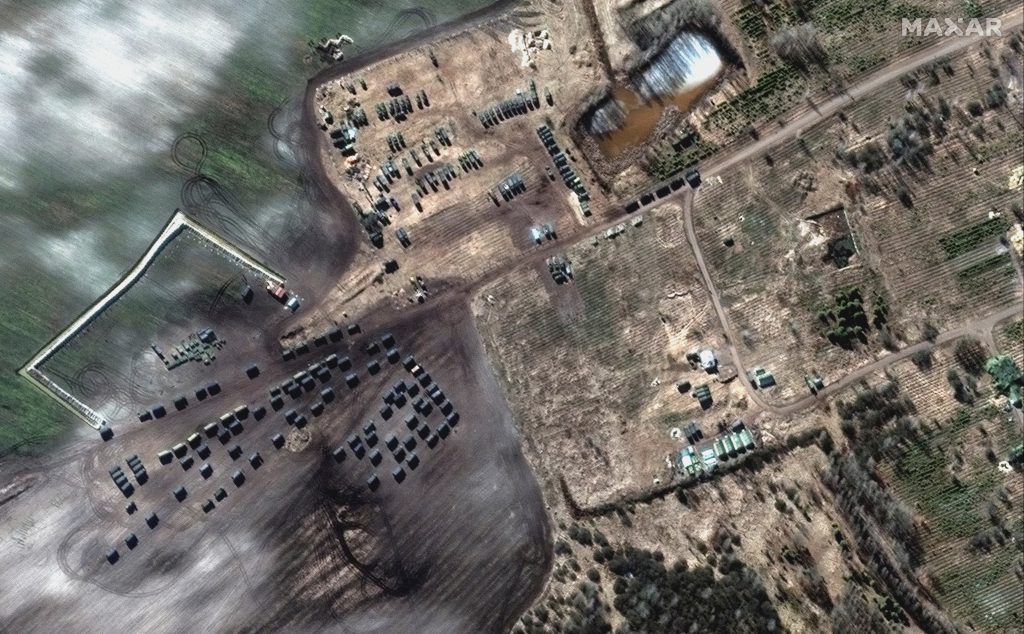 On March 11, the Kyiv Independent reported that a Russian aircraft attacked the Belarusian border village of Kopani from Ukrainian airspace in an attempt to make it appear that Ukraine had attacked Belarus. Ukrainian Defense Minister Oleksii Reznikov said the attack was a strategic provocation to provide Belarusian President Alyaksandr Lukashenka with a “casus belli” to move troops into Ukraine.

Meanwhile, Franak Viačorka, a senior advisor to Belarusian opposition leader Sviatlana Tsikhanouskaya, said Russia had launched “many missiles, planes and helicopters from the Belarusian territory” on the night of March 14. He said the attacks were launched from Luniniec, Mazyr, Mačuliščy, and Kalinkavičy. “Every 5 minutes, they bomb and come back,” he added. “The Belarusian army is not even informed. It is right to say that Belarus is under temporary occupation.”

Photos from social media suggested that some missiles were launched from the vicinity of Luninets, Belarus. These images have not yet been fully geolocated to verify their authenticity, however.

On March 13, Ukrainian President Volodymyr Zelenskyy visited wounded soldiers at a military hospital to award them “orders and medals for courage and dedication.” Both Ukrainian and Western media outlets covered the visit, while the only Kremlin-owned news outlet to do so was Radio Sputnik.

The pro-Kremlin Telegram channel Война с фейками (“War On Fakes”), a propaganda channel that masquerades as fact-checkers, suggested that Zelenskyy pre-recorded his visit. As evidence, the channel claimed that Sergeant Inna Derusova, a woman they allege is visible in footage with Zelenskyy, died on February 26, implying that the event was previously recorded and that Zelenskyy had left Kyiv. While it is true that Derusova, a senior field medic from Sumy, died on February 26 during a Russian artillery strike, she is not the same woman in the footage. The woman seen during Zelenskyy’s visit shares some visual similarities with Derusova, but there are also notable differences. First, the woman in the footage has a differently shaped nose and appears to be younger; second, she is wearing a name tag ending with the letters -enko.  Stopfake.org, a Ukrainian fact-checking organization, verified that the woman in the footage is Tatiana Ostaschenko, Commander of Medical Services for Ukraine’s Armed Forces, rather than the late Sgt. Derusova.

The War on Fakes Telegram channel deleted its initial post, but that didn’t stop pro-Kremlin media outlets like EurAsia Daily, Life.ru, and News.ru from publishing the story. Meanwhile, Ilya Kiva, a pro-Kremlin member of Ukraine’s parliament, also amplified the false story on his Telegram channel, prompting additional Kremlin-owned and pro–Kremlin media outlets to report on it, featuring headlines such as “Member of Rada accused Zelenskyy of creating a fake video.”

This is not the first time that pro-Kremlin information channels have suggested Zelenskyy is no longer in Kyiv. On February 26, Vyacheslav Volodin, a pro-Kremlin member of Russian parliament, wrote on his Telegram channel, “Zelenskyy left Kyiv in a hurry.” Kremlin-owned media outlets amplified the allegation. The next day, Zelenskyy recorded a video outside his Kyiv office to debunk the claim. And on March 8, the War with Fakes Telegram channel published a “debunk” suggesting that Zelenskyy is faking his videos to appear as though he is in Kyiv. Pro-Kremlin media once again amplified the post.

On March 14, Ukrainian Armed Forces posted on Facebook that Russian and Belarusian troops were unmotivated. “Morale of the enemy remains low, which leads to the refusal of servicemen of the Armed Forced of the Russian Federation to carry out orders,” they wrote. In addition, they claimed that Russian soldiers in Belgorod and Belarusian Special Operations Forces were refusing to fight in Ukraine.

On March 13, Alexei Danilov, Ukraine’s Secretary of the National Security and Defense Council, said that Belarusian troops refused an operation that would have forced them to wear Russian military uniforms. Danilov noted that if this does happen, Belarusians “will receive a rebuff, which the Russians and Chechens are already receiving.” Danilov did not cite a source for the claim.

Meanwhile, Radio Free Europe/Radio Liberty (RFE/RL) and the Kyiv Independent reported on morgues in Belarus filling up with bodies. Local residents told RFE/RL that the Russian soldiers killed in Ukraine are being brought to morgues in Belarusian cities close to the border, including Mazyr, Gomel, and Naroulia, and then sent back to Russia by train or plane. According to the report, “People at the Mazyr station were simply shocked by the number of bodies being put on the train.”

On March 13, the Russian Ministry of Defense alleged that it had killed around 180 foreign fighters and destroyed a large consignment of foreign weapons in strikes on the Yavorovsky training ground in western Ukraine. Russia reportedly launched more than thirty missiles at the International Peacekeeping and Security Center base, located in Lviv, around 20 km from the Poland-Ukraine border. According to local officials, Ukrainian missile defense systems intercepted most of the missiles. This marks the westernmost attack on Ukrainian territory since the outbreak of the war.

Ukraine acknowledged the airstrikes killed at least thirty-five people and injured more than 130, making it the deadliest incident of the war to date, though far below the number of deaths reported by Russia. Although foreign military instructors work in the military center, Ukrainian authorities did not confirm the deaths of any foreigners. The strike came after a warning from Russian Deputy Foreign Minister Sergei Ryabkov that Russia would target Western convoys in Ukraine to obstruct incoming supplies of weapons.

Kremlin-owned RIA reported that Americans are supporting Russia’s decision to block access to Facebook. The online outlet cited “American readers of Breitbart” – a US alt-right platform – giving the impression they represent broader American public opinion on the blocking of Facebook. According to RIA, some Breitbart readers blamed Facebook leadership for provoking harsh Russian measures, while others regretted that the social network is still functioning in the United States.

To support their claims that Americans back Putin’s Facebook blockage, RIA referenced users with account names like “Martygreencheeks” and “HillaryIsALoser.” The same suspicious comments and quotes were published by other Kremlin outlets as well. Kremlin outlets have previously used the same tactic of cherry-picking user comments from US and European websites to suggest broad western support for their policies.

For the second weekend in a row, Ukrainian residents of Russia-occupied Kherson protested against the Russian invasion. On March 13, protesters chanted slogans including “Kherson is Ukraine!” “Go home while [you’re still] alive!” and, “Russian soldiers, go f**k yourself!” A video published by Ukrainskaya Pravda, an independent news outlet in Ukraine, showed Russian soldiers firing gunshots into the air as protesters passed Russian military vehicles while chanting “Russian soldier/fascist occupier!”

The previous day, Sergey Khlan, a member of Kherson’s Regional Council, said that Russian occupying forces were preparing a referendum to establish the “Kherson People’s Republic.” Ukrainian Minister of Foreign Affairs Dmytro Kuleba and Presidential Advisor Mikhailo Podolyak amplified the referendum claims, though Russia has not confirmed any such referendum.

At the time of publishing, Kremlin-owned media had yet to report on the protests or referendum rumors. A search for mentions of the phrase “Kherson protest” in Russian over the past twenty-four hours on Kremlin-owned outlets RIA Novosti, TASS, RT, and Vesti.ru did not provide any results.

Cities and villages continue to be under attack in Russia’s war against Ukraine, with major urban areas taking damage from battle and indiscriminate artillery fire. Artillery continued to land in cities under Ukrainian government control, including a resumption of heavy fire on Kharkiv. Smaller villages are also affected; recent reporting from The Guardian documented shelling, executions of civilians, and robbery by Russian troops in villages in the Kyiv region. Claims emerged of the use of incendiary munitions near the town of Popasna, but they have yet to be verified. In Melitopol, occupying forces installed a new collaborationist mayor to replace Ivan Fyodorov, who was previously abducted by Russian security forces. Meanwhile in Donetsk, a Tochka-U missile struck the city center; preliminary evidence points to Ukrainian culpability.