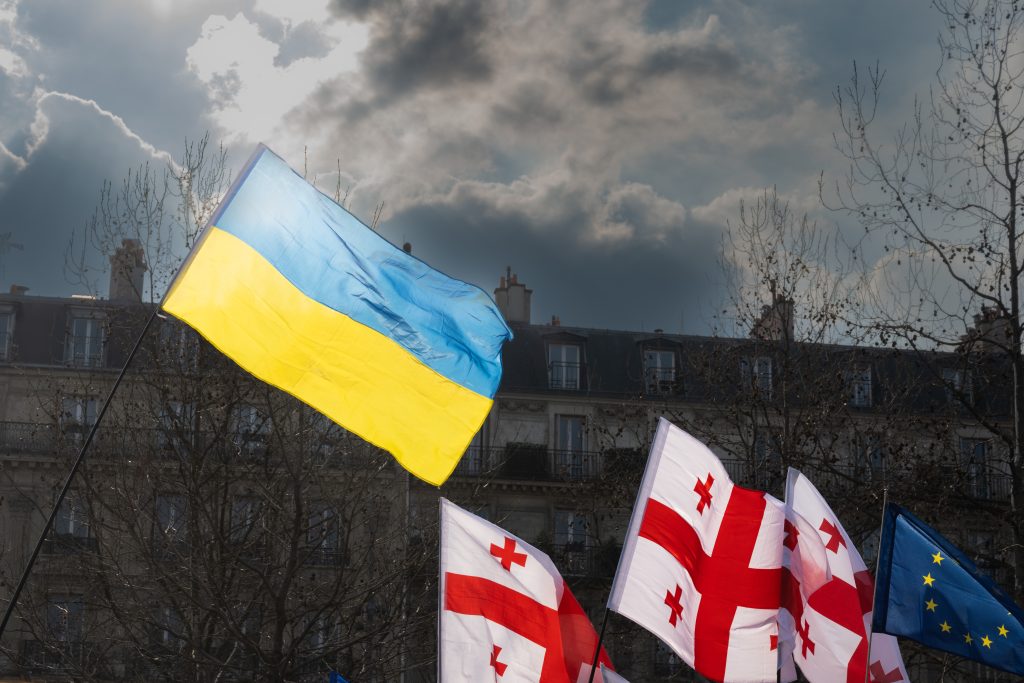 On April 4, Ukraine’s Ministry of Defense (MoD) stated that Russia was working to establish smuggling routes as means of circumventing international sanctions that have obstructed the Kremlin’s ability to import military and civilian goods. The statement said specifically that one such smuggling route would pass through Georgia. The Ukrainian MoD also asserted that Georgia’s political leadership had allegedly instructed the special services not to intervene or hinder the activities of the smugglers.

After the statement’s release, Deputy Prime Minister of Ukraine Iryna Vereshchuk addressed the people of Georgia, asking them to help pressure their country’s government to cease allowing smuggled weapons to transit through Georgian territory. Ukrainian authorities, however, did not provide evidence to corroborate the MoD statement.

Georgian authorities promptly denied Ukraine’s allegations and demanded that Ukraine provide additional details to support the accusation. On April 4, the Georgian Ministry of Finance stated, “Georgia has been pursuing most severe control at every check-point of the country and has been tightly monitoring the inbound and outbound transportation of cargo through the sovereign borders of the country.” The State Security Service of Georgia called on Ukraine to provide evidence to support its claim that Georgia was aiding in smuggling illegal cargo and added that, if Ukraine fails to provide evidence, Georgia would consider the MoD statement as “deliberate misinformation” that “represents an extremely unfriendly and provocative step and aims at stirring domestic unrest in Georgia.”

Representatives of Georgia’s ruling party, Georgian Dream, expressed disappointment with the Ukrainian MoD statement and argued that Ukraine did not have any evidence to support the claim. Georgian Dream members blamed people from Georgia’s previous government, who currently work for Ukrainian government, for orchestrating the statement.

Some leaders of the Georgian opposition also expressed skepticism toward Ukraine’s statement. David Usupashvili, a Member of Parliament from the opposition Lelo party, argued that the allegations from Ukraine would “be impossible to be correct.” Giorgi Vashadze, leader of the Strategy Agmashenebeli party, stated that, if Ukraine does not present evidence to back up its statement, it should apologize. Representatives from the main opposition party, the United National Movement, argued that Ukraine would not make such a statement without having evidence.

On April 5, Teimuraz Janjalia, Georgia’s Deputy Minister of Foreign Affairs, met with Chargé d’Affaires of Ukraine Andrei Kasyanov to express concern about the Ukrainian MoD’s statement. Following the meeting, Janjalia told local media that Kasyanov could not provide evidence to back up the claims. On April 5, US Department of State Spokesperson Ned Price was asked about the MoD claim but said he was “not in a position to substantiate or speak to the allegation.”

In response to Georgia’s request for evidence, on April 5, Ukraine’s Minister of Foreign Affairs Dmitry Kuleba argued that Georgia must provide evidence and convincing arguments that the country is not helping Russia to organize smuggling channels. He added that, if Ukraine had not already influenced Georgia and other countries through which Russia is trying to bypass sanctions, these countries would have allowed Russia to circumvent sanctions a long time ago.

Kremlin-owned outlet RIA.ru reported that Ukraine is planning deadly activities in the Kherson village of Oleksandrivka as a provocation against Russia. The article cited an anonymous source in “Russian law enforcement agencies in Kherson,” who said they had received their information from “informants among the Ukrainian troops” in Mykolaiv. The article claims without evidence that Ukraine is deploying saboteurs tasked with the “organization of shelling, mining houses, and schools, which can lead to a large number of civilian casualties.” This appears likely to be the latest false flag operation from Russia.

Since the invasion of Ukraine, Russia has used false flags to justify its actions in Ukraine. In one false flag operation, a Russian military official stated that “Ukrainian Nazis” planned to blow up the Sumykhimprom chemical plant. Two days later, Russian troops shelled the plant.

The Kherson false flag allegation may indicate Russia’s next target, or it could be an attempt to obscure the truth behind civilian killings or other war crimes in the region that have already occurred.

On April 5, jailed Russian opposition leader Alexei Navalny released a statement calling on the international community to treat the owners and operators of Russian state propaganda outlets as war criminals. “Putin’s propaganda has long ceased to be a tool,” he wrote. “They are actual warmongers and have become a party in their own right,” and Russian propaganda “create[s] the kind of public opinion that no longer simply allows Putin to commit war crimes but demands them of him.”

In the Twitter thread, Navalny also described how Kremlin-owned media presented the war in Ukraine to Russian viewers. “The monstrosity of lies on federal channels is unimaginable,” wrote Navalny. As an example, Navalny cited a narrative shared by Channel One Russia that claims NATO was “preparing the provocation in Bucha for a long time and at the highest level. It is also confirmed by the fact that President Biden called Putin a ‘butcher’ not long ago.” Navalny says Channel One Russia reported that Biden used the word “butcher” intentionally because it sounds similar to Bucha, thus “subconsciously” preparing Western audiences for the “provocation.”

Navalny’s message comes after Kremlin spokesperson Dmitry Peskov said Russia categorically rejected all accusations that the Russian military killed Ukrainian civilians in Bucha. Peskov claimed that experts with the Russian Ministry of Defense “identified signs of video fakes and various fakes” in Bucha but failed to provide any evidence that actually backed those claims. These claims also contradicted satellite imagery of Bucha, which appeared to show bodies lying in the streets two weeks before Russian troops withdrew from the town.

In a call to action, Navalny outlined steps to disrupt Kremlin disinformation campaigns, including a total ban on the supply and service of equipment and identifying Russian state assets in the West and placing them on “visa blacklists.” These steps echo statements from Mykhailo Federov, Ukraine’s Minister of Digital Transformation.

Earlier this week, the DFRLab reported on a three-hour CCTV video, released by a Belarusian Telegram channel, showing Russian troops at the Mozyr branch of CDEK, a Russian delivery company, appearing to be shipping stolen goods to Russia. The same Telegram channel, Belaruski Gayun, has now published a report – which security-reporting website Motolko Help subsequently provided English-language coverage of – purportedly containing leaked information about the packages’ senders, receivers, and contents. The documents allege that, on April 2, Russian soldiers used CDEK’s Mozyr branch to ship more than two tons of goods, most of which appeared to be stolen. Many of the packages were sent to Rubtsovsk in Altai Krai, Russia.

Belaruski Gayun’s list included an accounting of the weight and contents of the packages. One individual sent 450 kilograms of goods, including music speakers, tools, a table, and a tent. Another person sent a 255-kilogram package containing spare tools and an e-scooter.

Mediazona Belarus created a map to visualize the packages’ destinations and total weight. Belarusian media outlet Zerkalo contacted CDEK, which confirmed that, on April 2, people in military uniforms with Russian passports sent a large number of packages. The company also confirmed that the number of visitors to the Mozyr branch on April 2 was unusual. In addition, Mediazona published a video of Russian soldiers at a Russian branch of CDEK in Novozybkov, near the Ukrainian and Belarusian borders. In this video, soldiers can also be seen shipping goods.

On April 6, videos showing a brutal arrest of three Belarusian partisans from Babruisk surfaced online. The Belarusian Ministry of Interior Affairs alleged that the partisans were attempting to sabotage the country’s rail network broadly as an act of “armed terrorists” who were “endangering the security” of Belarusians.

The arrest took place on March 30 according to the watermarks on the videos, which were taken by the Belarusian Ministry of Internal Affairs. The videos showed that the arrested men had seemingly been beaten, some covered in blood. According to activist reports, the Belarusian military has been using live munitions against them. Graphic visual evidence suggests that one of the railway partisans was shot in both kneecaps after the arrest.

According to the Senior Advisor to Sviatlana Tsikhanouskaya Franak Viačorka, at least 38 Belarusians have been captured due to their activities against Belarusian railways. They face up to 15 years in prison for their actions.

News that the railway system will be guarded by Belarusian special forces against sabotage appeared as early as March 24. This is, however, one of the few pieces of visual evidence of partisans being arrested.