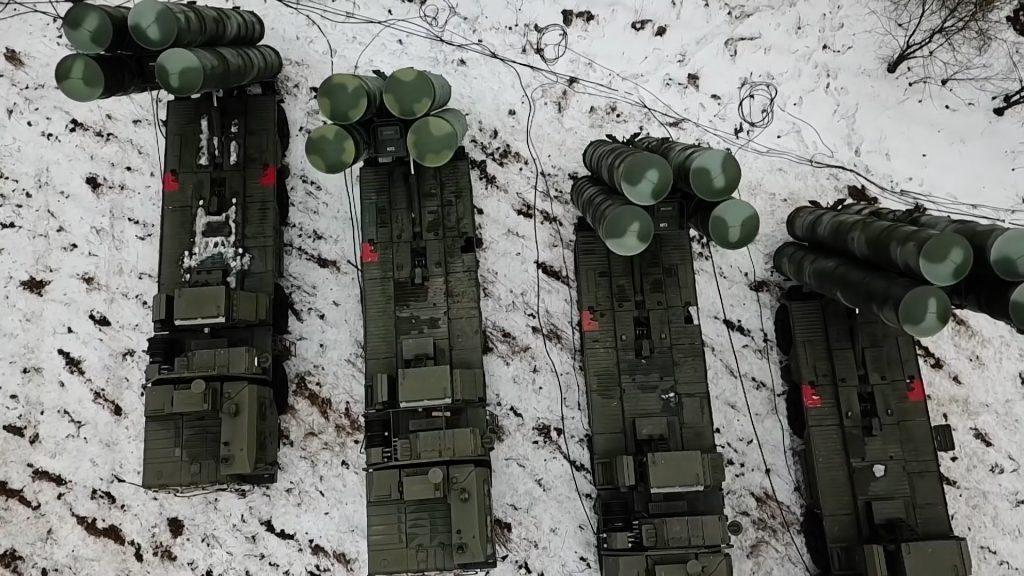 The second phase of Russia’s highly anticipated bilateral military exercise with Belarus, called Union Courage ’22, kicked off on February 10. But much more than reaffirming the relationship between the two countries, it is a useful cover for the deployment of Russian high-end military equipment and an opportunity to rehearse missions applicable to a large-scale Russian invasion of Ukraine.

While imperfect, the proliferation of commercial satellite imagery and hand-held photos and video have provided a surprisingly thorough look at Russia’s military build-up. Its Ministry of Defense (MoD) has also provided insights into the types of missions these joint forces have engaged in—which allows experts to extrapolate the missions the Kremlin believes are important and to assess how they intend to execute combined arms operations in the event of a further invasion of Ukraine.

Although the execution phase of the exercise has only just begun, there is already plenty to learn from the types of forces deployed, the actions they have conducted so far, and the subjects Russia has chosen to publicize. Based on these observations, it is clear that Russia is focusing on air superiority, close air support, long-range fires, intelligence collection, and combat sustainment.

Russia has already deployed the forces necessary to initiate a large-scale invasion of Ukraine. It is using the Union Courage exercise to posture and prepare those forces to conduct offensive operations against Ukraine, should they be directed to invade. Based on observed deployments and training events, it is apparent that in the event of a further invasion, Russia intends to rapidly establish air superiority over Ukraine and will initiate its mechanized offensive with precision long-range fire (both from the ground and from aircraft). And it will be prepared to support that ground offensive with overwhelming support from ground-attack aircraft.

Air superiority. The first exercise-related force deployment was the movement of twelve Su-35S aircraft, two S-400 long-range surface-to-air missile (SAM) system divisions, and the short-range Pantsir-S1 air-defense system to Belarus. These deployments signal the importance Russia places on control of the air. The S-400 has a 250-kilometer maximum range, and its positioning of the system establishes an anti-access/area denial (A2/AD) “bubble” that reaches from its location near Brest across the border into Ukraine, including over Kyiv.

Both the Pantsir-S1 gun and SAM system provide point protection for high-value targets, and the fact that they deployed together signals that Russia intends to protect its very high-value A2/AD capabilities. The MoD announced that S-400 crews would also be training to “camouflage of launch positions,” a critical combat capability that makes it much more difficult for adversaries to target the system. Given the Su-35S’s potent air-to-ground and air-to-air capabilities, its deployment is a clear message that the Russian Air Force will shoot down any Ukrainian (or other) aircraft that flies over combat areas in the event of an invasion.

Close air support (CAS). Even before the execution phase of the exercise began, Russia had begun training to integrate air support into its ground forces. Su-25 and Yak-130 land-attack aircraft conducted live-fire training at the Brestsky Training Grounds in Belarus, according to a February 3 MoD statement, which noted how the aircraft worked with ground and airborne units and were integrated with artillery and army aviation strikes. It also pointed out that aerial reconnaissance from an unmanned aerial vehicle (UAV) was used to generate the targets for the fighter-bomber aircraft. Additionally, Russia deployed a squadron of Su-25SM aircraft, which boast improved precision attack and self-defense capabilities, to the region. These are all signals that support to ground operations will be a major focus of a potential further invasion of Ukraine.

These training events provide valuable reps both to the ground units and the CAS aircraft which will support of any major offensive. Also revealing was the February 6 publication of video footage showing two Tu-22M3 bombers over Belarus, while hand-held video surfaced a day later showing a MiG-31 equipped with a Kinzhal air-launched, hypersonic, ballistic missile landing in Kaliningrad for the first time. The former is the most upgraded variant of the long-range, supersonic, nuclear-capable bomber, and the latter could launch the Kinzhal missile from airspace over the Kaliningrad exclave and easily reach multiple high-value targets in Ukraine, including Kyiv. These deployments provide an implicit threat of nuclear retaliation in a potential expanded Ukraine conflict with US and NATO forces.

Intelligence, surveillance, and reconnaissance. In addition to the UAV’s role in identifying targets in the Brestsky live-fire exercise, the MoD also publicized the exercise preparations of its crews for the Orlan-10 UAV. That means Russia will likely rely heavily on that aircraft and its crews to detect, identify, and nominate targets for destruction by either ground-attack aircraft or ground-based fires.

Combat sustainment. The exercise also gave Russia the cover to build up combat-sustainment capabilities and forward deploy critical supplies. Russia set up field camps that included field medical services and supplies, vehicle fueling and maintenance stations, as well as “depots of fuel and ammunition,” the MoD said. These critical capabilities are required before the kickoff of any major military operation.

This exercise offers all three for President Vladimir Putin. Strategically, it is meant to signal strength to the West (and to deter US and NATO intervention in any potential conflict). Operationally, Russia is posturing huge numbers of forces and critical capabilities in Belarus, which geographically allows Russia to threaten Kyiv, as well as seize the opportunity to test joint and combined large-force deployment (never easy in a conflict).

Finally, there are multiple tactical reasons this exercise will benefit Russian and Belarusian forces. Besides providing the “reps and sets” needed to test and refine the interoperability required in a conflict, it will also help Russian forces familiarize themselves with the operating environment (especially those deploying from far away). The exercise also provides air and land forces with the opportunity to train to specific missions or tactical actions that they will be called upon to perform in the event of armed conflict.

In other words, it’s the perfect preparation for an invasion—if Putin wants one.

Opinions, conclusions, and recommendations expressed or implied within are solely those of the authors and do not necessarily represent the views of the Department of Defense or any other US government agency

Lt. Col. Tyson Wetzel is the 2021-22 senior US Air Force fellow at the Atlantic Council’s Scowcroft Center for Strategy and Security.

Image: Combat crews of the S-400 anti-aircraft missile system are deployed in the Brest region, Belarus, as part of large-scale military exercises on February 10, 2022. Photo by Russian MOD/EYEPRESS/REUTERS