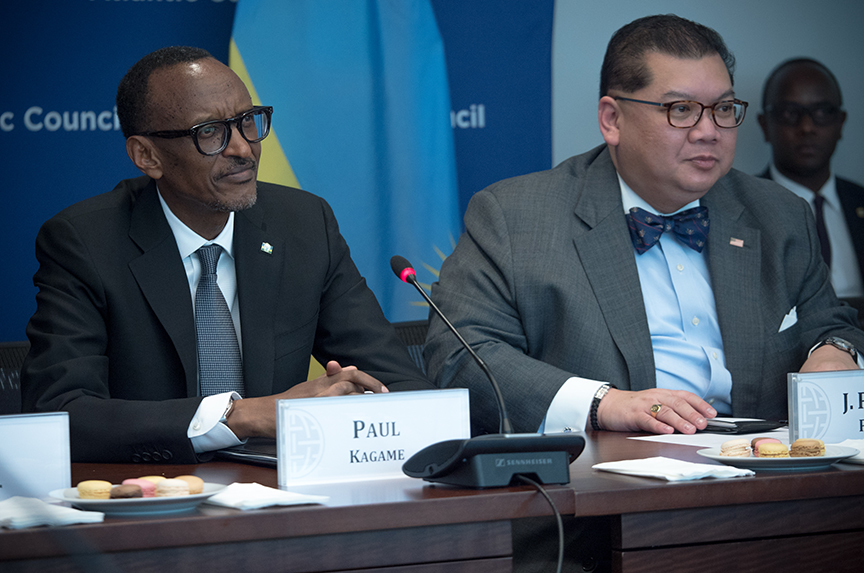 The United States needs to shift its relationship with Africa from a predominantly humanitarian focus to “productive partnerships,” especially in business, strategic development, and security, Rwandan President Paul Kagame said at the Atlantic Council on March 27.

“For decades, the United States has adopted a monolithic approach to Africa,” said Kagame. “It’s time for fresh thinking.”

Speaking at an exclusive roundtable meeting hosted by the Atlantic Council’s Africa Center, the Rwandan leader noted an opportunity—presented by the transition to a new US administration—for African nations to better shape their relationships with the United States based on African priorities and ambitions.

Kagame’s call for a shift in Africa’s relationship with the United States away from a reliance on humanitarian aid dovetails with US President Donald Trump’s plans to slash foreign aid. Trump has said little, if anything, about Africa since coming to office in January.

Referring obliquely to the rise of nationalist far-right populists in the West, Kagame said that while these developments have caused anxiety around the world, “there is a silver lining for Africa.”

“We continue to see improvements in the different parts of our continent,” he said.

Kagame is a former rebel leader credited with ending the genocide in Rwanda in 1994. As Rwanda’s president, Kagame has championed economic reforms that have opened up the country’s economy and led to significant growth.

Retired Marine Corps Gen. James L. Jones, Jr., chairman of the Atlantic Council’s Brent Scowcroft Center on International Security and a former national security advisor in the Obama administration, noted that under Kagame’s leadership Rwanda today ranks as one of the easiest countries in which to do business and is one of the world’s fastest-growing economies.

“African aspirations are rising,” said Kagame, noting that economic growth on the continent has been powered by better governance, regional integration, and business-friendly reforms.

“Africa is looking to future growth shaped by favorable demographics, technological innovation, and urbanization,” the president said. However, he added, “We still lack a strong and unified voice that clearly communicates Africa’s ambitions and positions on the global stage.”

Toward this end, reforms are being undertaken to make the African Union more financially independent and effective.

Kagame, who has been in power since 2000, intends to run for a third term this year. He was originally limited by the constitution to two terms, but Rwandans voted in a referendum in 2015 to authorize him to stand for another term of seven years and two more five-year terms after that. Kagame could, effectively, be in power until 2034.

Kagame has described these developments as “the people’s choice.”

Image: “For decades, the United States has adopted a monolithic approach to Africa. It’s time for fresh thinking,” Rwandan President Paul Kagame (left) said in a roundtable meeting at the Atlantic Council on March 27. J. Peter Pham, director of the Atlantic Council’s Africa Center, is pictured on the right. (Atlantic Council/Bradley Howard)