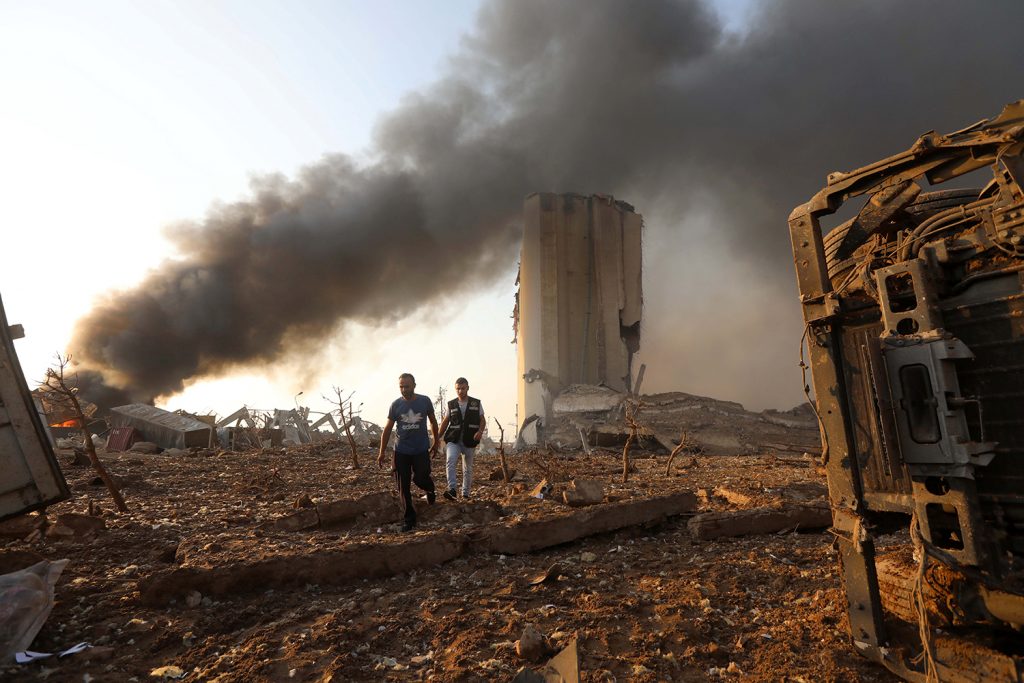 The blast was a brief, sharp, concussive thunderclap that made me flinch as I drove along a mountain road near the village of Mrouj some fourteen miles east of Beirut. My wife initially thought some local children had set off a large firework beside our car, possibly in celebration of the day of the annual festival for the Virgin Mary. But a few minutes later, having noticed worried looking residents of this Christian village stepping outside and gazing around, it appeared something more serious had happened.

We stopped at a shop to pick up a bicycle for my daughter when I heard a woman walking past speaking about an explosion in Beirut. It quickly became clear that a massive blast had emanated from Beirut port. My phone started ringing. The immediate suspicion was that Israel had staged an air strike against a consignment of weaponry destined for the Iran-backed Hezbollah that was being stored in—or transferred from—Beirut port.

Tensions have been high between Hezbollah and Israel since July 20 when a Hezbollah militant was killed in Syria in an Israeli airstrike. Hezbollah had vowed to retaliate for his death and the Israeli military went on high alert along Israel’s northern border. On July 27, the Israeli military opened fire along the front of the Shebaa Farms, an Israeli-occupied mountainside along Lebanon’s southeast border that is claimed by Beirut but the United Nations says is Syrian territory. Initial reports said that Hezbollah had staged an attack against Israeli forces in the Shebaa Farms, which the organization later denied. Israel said it had spotted a four-man Hezbollah squad infiltrating the Shebaa Farms, presumably with the intent to stage an attack. The Israelis monitored their movements until they reportedly reached within fifty yards or so of an Israeli outpost. The Israeli soldiers opened fire at the squad but were under unprecedented orders to miss their assailants in order to prevent an escalation. Better to let them escape unharmed than kill them and escalate tensions further, so the reasoning went. The order underlined the notion that neither Israel nor Hezbollah is interested in embarking on a war at this stage.

So, given this cheek-turning stance by the Israeli military—which traditionally has a shoot-to-kill order for anyone crossing the border from Lebanon—was it really possible that the Israelis had staged an airstrike against a target in Beirut port that appears to have caused the largest non-nuclear explosion in the world since the last one in 1983—ironically also in Beirut—when militants destroyed the US Marine barracks beside Beirut airport?

The phone lines buzzed with reports of people hearing Israeli jets and drones over Beirut shortly before the blast. But residents of Beirut—and Lebanon as a whole—hear the sound of Israeli jets and drones on a daily basis. My glassed-in balcony office serves as a natural sound trap for aerial activity, shutting out street sounds and making the rumble of jets and whine of drones clearly audible.

I drove down the mountains to Beirut as reports came in that the explosion had been caused by some chemical element connected to ammonia and that people should stay indoors or wear masks if outside—COVID-19-on steroids! The roads leading out of Beirut were jammed with traffic. Many Lebanese living in Beirut have homes or relatives living in mountain villages and it seemed that they were taking advantage of this to get out of the disaster zone.

Having dropped off my children with their grandmother, my wife and I headed toward our apartment in Rmeil in east Beirut, about a mile and a half from the epicenter of the blast. The traffic in east Beirut was clogged partly because there is a hospital near my building that was simultaneously damaged by the blast and is also receiving huge numbers of casualties. The unrelenting wail of ambulances underlined the seriousness of the disaster. The streets were dark because of the endemic power cuts Lebanon is suffering as a result of the economic crisis that has brought the country to the brink of collapse even before this latest calamity. Smashed glass carpeted the streets of the Ashrafiyeh neighborhood, crunching beneath the tires as we inched forward to reach our home. After arriving home, we avoided taking the elevator and walked the seven floors to our apartment. On the second floor we met our neighbor, an officer in the Lebanese army who phlegmatically said everything is gone in our building and in our neighborhood.

My apartment was heavily damaged by the explosion. All the windows were gone, the frames blasted out, even on the other side of the building from the explosion. Furniture was thrown against walls, pictures pockmarked with the glass shards, cupboards exploded, spilling contents on the floor. Even moving through the apartment was difficult because debris blocked access through doorways. My balcony office, where once I could hear Israeli jets passing overhead, is gone. I spoke to friends and colleagues in the area. They all have tales about calamities, material and personal, that have befallen them.

On September 1, Lebanon will mark its 100th anniversary as a nation. Right now, given all that has befallen Lebanon the past year, there is little to celebrate.

Nicholas Blanford is a nonresident senior fellow with the Scowcroft Middle East Security Initiative at the Atlantic Council.

Lebanon’s fate appears to be irreversibly tied to Syria

With hope for any solution dimming every day, and as Lebanon and Syria’s fate becomes increasingly intertwined, the situation in Beirut will grow more desperate.

Twenty years after the Israeli withdrawal from Lebanon, Hezbollah faces host of challenges

The Israeli troop withdrawal was a moment of victory for Hezbollah, but the group has also placed the party in a quandary for the first time, which it has had to wrestle with before a growing audience of critics.

By Salman Husain and Diam Abou-Diab

As multiple crises are simultaneously bearing down on Lebanon, its fragile humanitarian situation is nearing a breaking point.

Image: Men walk at the site of an explosion in Beirut, Lebanon August 4, 2020. REUTERS/Mohamed Azakir