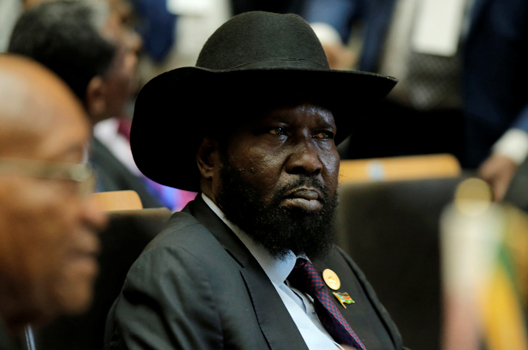 The US arms embargo on South Sudan not only sends a strong signal to South Sudanese President Salva Kiir, but ultimately “weakens his ability to hold on to power by force,” according to the Atlantic Council’s J. Peter Pham.

On February 2, the US Department of State announced the imposition of a new embargo on the sale of defense articles and services to South Sudan. While the United States government has little in the way of arms trade with Juba, the embargo “cuts off several US individuals and businesses that have been involved in supplying security and defense services of various types to the Salva Kiir regime,” said Pham, vice president for regional initiatives and director of the Atlantic Council’s Africa Center.

He added: “It may not seem significant given the scale of the fighting in South Sudan, but it will send a signal to the political and other elites in Juba.”

South Sudan has been embroiled in a civil war since 2013. It began when Kiir attempted to eliminate his rival, then-South Sudanese Vice President Riek Machar. According to Pham, the ongoing conflict has forced at least one-third of South Sudan’s citizens out of their homes, and another two million to the brink of famine.

US Ambassador to the United Nations Nikki Haley visited South Sudan and met with Kiir in late October, 2017. Last week, she addressed the United Nations (UN) Security Council and called for a collective arms embargo on South Sudan. In the last weeks of his administration, former US President Barack Obama also called for a UN Security Council arms embargo on South Sudan, but failed to get it passed.

Haley deemed Kiir, whose regime has been responsible for a string of broken ceasefires throughout the conflict, an “unfit partner” for the United States as Washington works to bring about an end to the civil war.

This renewed impetus to act against the Kiir regime comes not only from the United States. Members of the African Union also have begun to advocate for tougher sanctions against South Sudanese officials responsible for the war.

While this arms embargo will “hopefully” induce change on the ground in South Sudan, Pham said that if it does not, the United States may pursue other measures such as more targeted sanctions and a reassessment of US aid packages.

US President Donald J. Trump’s National Security Strategy states: “If necessary, we are prepared to sanction government officials and institutions that prey on their citizens and commit atrocities. Where there is no alternative, we will suspend aid rather than see it exploited by corrupt states.”

In an interview in 2016, Pham cautioned: “Although the first impulse of any country…is always responding to need…there are times when the delivery of aid or the freedom to do so is itself tipping the hands on the scale, or in some cases enabling conflict.”

Pham spoke in an interview with the New Atlanticist’s Rachel Ansley. Here are excerpts from our interview.

Without a significant defense trade with South Sudan, what is the value in a US arms embargo?

“It sends a very powerful signal. The Obama administration failed to pursue an arms embargo on South Sudan until the last weeks of the administration. Then, having failed to secure the approval of the UN Security Council, it pretty much dropped the matter rather than proceed with an embargo on its own. In contrast, the Trump administration’s action sends a very powerful signal that the US will proceed unilaterally if it cannot secure the UN backing on it. Although, it is worth noting, that the African Union itself is now backing stiffer sanctions.

“Although direct US arms sales to South Sudan are fairly limited, there are contractors and others who supply services to the regime in South Sudan, including US ones. Their actions are unconscionable, and this embargo cuts off even that limited support for a regime that has not just failed its people, but been the principal cause of their suffering.

“It also sends a signal to countries in the region that have been funneling arms to South Sudan either by passively allowing arms to pass through their territory, or in some cases actually supplying weapons that they obtained on the international markets tothe Salva Kiir regime and its opponents. I think this sends a very powerful signal to those countries, some of whom are very large beneficiaries of US military assistance, that the US position on this has shifted considerably.”

Is this initial signal a foreshadow of potential further action?

“Yes. The National Security Strategy, released in December, made very clear a point that I’ve long argued which is that in Africa we need to pursue a strategy of ‘earned engagement,’ that is assigning benchmarks and metrics to the partners we choose, and, where necessary, cutting them off when they prey on their citizens, commit atrocities, or otherwise are at odds with America’s interests. Ambassador Nikki Haley has been very forward on this. Last week, she gave a very powerful speech at the UN saying that the government of South Sudan, far from being a partner, was actually one of the causes of the conflict and in fact was an ‘unfit partner’ for the international community.”

Could this measure have a demonstrable impact on the conflict?

“Once the federal regulations governing the international arms trade are amended, it cuts off several US individuals and businesses that have been involved in supplying security and defense services of various types to the Salva Kiir regime. The embargo puts them at odds with US law, and there will be ripple effects beyond just these firms. People on the ground will notice the withdrawal of those services. It may not seem significant given the scale of the fighting in South Sudan, but it will send a signal to the political and other elites in Juba.”

Why now? What has changed that the United States chose unilateral action?

“Let there be no mistake: Salva Kiir started this conflict. Since then, his regime has then repeatedly dragged its feet, first with regard to signing any sort of ceasefire agreement, then when it finally signs them, it violates them almost immediately. In this particular case, I think the final straw was that on December 21, 2017, the government signed a cessation of hostilities with the armed opposition that was supposed to take place by Christmas, then within days broke that agreement. It is the constant cycle of signing agreements and breaking them whenever Salva Kiir  thought he could gain an advantage by doing so. Moreover, Salva Kiir recently promoted three generals who were previously sanctioned by the UN Security Council for their role in atrocities. Ambassador Haley rightly called this a ‘slap in the face’ to the international community.

“This is a government that the United States has given $11 billion over the years and which is causing a conflict and continuing to drive it, turning 2.5 million of their own citizens turned into refugees, while internally displacing at least another 1.9-2 million. That is more than one-third of the entire population of the country that is homeless because of this government. As a result, upwards of 2 million civilians are on the verge of famine and starvation because of this government.”

Will this step by the United States pressure the United Nations Security Council to follow suit?

“Hopefully there will be some movement, especially with the government thumbing its nose at the Security Council with the promotion of the generals. If not, I think the United States needs to create a coalition of the willing. Our European partners already have an arms embargo. In addition, I think we need to look at the role of aid. In many ways, we’re cushioning the government. The National Security Strategy lays out the possibility that in some cases we may have to take the difficult decision of cutting off aid when it used to prop up an abusive or otherwise illegitimate government. In the case of South Sudan, what we’re seeing is the government has not given free access to international aid agencies but rather redirected assistance to its centers of support. They’re using our aid as an additional weapon, and I think taking a hard look at that might be the next step.”

How will this arms embargo affect the government of Salva Kiir?

“There are two people at the center of this conflict. One is Riek Machar, who has been marginalized—he’s in exile in South Africa, in part because of US pressure, so he’s off the scene. But you can’t end the conflict when the other player—Salva Kiir—is left on the scene and thinks that his rival being off the stage he can win militarily and impose a dominion over his opponents.

“I think everyone is coming around to recognizing that Salva Kiir is one of the biggest obstacles to the life, liberty, and pursuit of happiness of the South Sudanese people.

“This arms embargo weakens his ability to hold on to power by force.”

What further measures are necessary—from the United States and regional partners—to end the fighting in South Sudan?

“The next step in this is looking at directly sanctioning those involved in the ongoing conflict. The UN Security Council and the United States have sanctioned a number of individuals over the years, but they’ve been few and far between. There should be more, up to and including Salva Kiir, his deputy Taban Deng, the head of his brutal security service Akol Koor, and other failed ‘leaders’ responsible for the ongoing suffering of the South Sudanese people.”

Image: South Sudan's President Salva Kiir Mayardit attends the 30th Ordinary Session of the Assembly of the Heads of State and the Government of the African Union in Addis Ababa, Ethiopia January 28, 2018. (REUTERS/Tiksa Negeri)