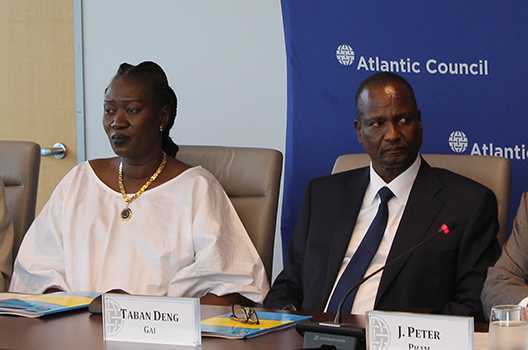 On a visit to the Atlantic Council in September 2016, South Sudan’s First Vice President Taban Deng Gai had a clear message for his interlocutors in Washington: “What we tell them is, ‘Look, there is peace. Let us not allow that to collapse.’”

Deng spoke even as the death toll in South Sudan’s civil war steadily mounted. The war, which broke out in December 2013, was triggered by the bitter rivalry between South Sudan’s president, Salva Kiir, and his on-again-off-again First Vice President Riek Machar. A new study backed by the US State Department concluded that at least 382 900 people have died since 2013; millions have been displaced.

It’s little wonder then that Deng raised plenty of eyebrows when he expressed optimism about the prospects of peace in his country at his latest appearance at the Atlantic Council on October 2.

The almost 400,000 people killed over the past five years “is a higher mortality rate vis-à-vis population than the civil war in Syria,” said J. Peter Pham, director of the Atlantic Council’s Africa Center, noting pointedly to Deng: “The deaths, by the way, peaked in 2016 and 2017, coinciding with your tenure as first vice president.”

Deng implored the gathering of Africa experts—some of whom played critical roles in the birth of his nation in 2011—not to give up on South Sudan. “We have disappointed you, but we are capable of coming back,” he said.

South Sudan gained independence from Sudan in 2011 after two decades of civil war that claimed the lives of more than two million people. The brief history of the world’s youngest nation is littered with broken peace agreements, its future held hostage to the egos of its leaders.

In December 2013, South Sudan was plunged back into a familiar cycle of war after Kiir accused his vice president, Machar, of plotting to overthrow him. US officials and a team of African Union investigators separately found no evidence of such a plot.

In 2015, Kiir and Machar appeared to set aside their differences and signed a peace agreement. That deal fell apart the next year after clashes between Machar’s forces and those loyal to Kiir left hundreds dead in Juba.

On June 27, 2018, Kiir and Machar agreed to yet another peace agreement that committed them to a “permanent ceasefire.” That deal lasted all of six hours. The pair then signed a “final ceasefire and power-sharing agreement” in Khartoum on August 6.

On September 12, Kiir and Machar signed yet another agreement in Addis Ababa that seeks to end the country’s five-year civil war.

Deng believes this latest peace deal will stick because “all parties are now committed to its full implementation.” What’s more, he claimed, the “weaknesses” within the ruling Sudan People’s Liberation Movement (SPLM), which he blamed for the latest round of war, have been addressed.

Under the terms of the peace deal, Machar will once again assume the role of first vice president under Kiir. A transitional government is supposed to be established in eight months followed by elections in three years.

Pham said he hoped the latest peace deal will succeed because “the cost of this senseless conflict has already been too high.”

However, things are off to a shaky start. Late last month, Machar turned down an invitation from Kiir to visit Juba citing the dire security situation in the South Sudanese capital.

The question of detainees

As part of the peace agreement, Kiir has ordered the release of all prisoners of war and detainees.

Human Rights Watch says: “Since the outbreak of South Sudan’s conflict, government security forces, particularly its national security agency, have consistently targeted people seen to oppose the government based on their political opinion and not criminal acts.  These include journalists, human rights defenders, and members of political opposition groups. They are often held for long periods – years, in some cases –without access to lawyer or family visits.”

One of these detainees is Peter Biar Ajak, an alumnus of the Atlantic Council Millennium Fellowship. He was arrested in Juba on July 28. He has been charged with treason-related offenses. The Atlantic Council has appealed to the South Sudanese government for Ajak’s immediate release.

In a statement issued in August, Wilson, the Atlantic Council’s President and Chief Executive Officer Frederick Kempe, and Millennium Leadership Program Director Daniel Bennett wrote: “We urge that Peter’s rights be respected, his safety assured while in custody, and that he be released immediately.”

“Peter is one of many people to be arbitrarily detained in recent years in South Sudan. Too often, these cases go unnoticed and no one is held accountable,” they added.

Deng claimed Ajak is a relative of his. “All of us are working as a family for Peter to get released,” he said, adding, “If my in-law can be arrested this shows there is rule of law in the Republic of South Sudan.”

Kate Almquist Knopf, director of the Africa Center for Strategic Studies at the National Defense University, told Deng his response was “emblematic of the reason why there is a lack of confidence and extreme skepticism in this so-called peace agreement for South Sudan.”

Noting that Ajak was “arbitrarily arrested and detained,” she added: “It took over a week for any charges to be made known against him… There is no rule of law in South Sudan that would lead to this pathway for this individual who clearly has been an outspoken critic of the president, of the government, and of the situation in South Sudan.”

“What is says to many of us is: this is not a new moment for South Sudan,” she added.

South Sudanese soldiers have been at the forefront of committing atrocities in the country. Amnesty International recently accused government forces and allied militias in South Sudan of carrying out war crimes of “staggering brutality” in Unity State.

Deng hit back against such accusations claiming there is no way to tell an armed civilian apart from a South Sudanese soldier.

In an attempt to turn off the spigot of arms flowing into the country, the United Nations Security Council imposed an arms embargo on South Sudan in July. This embargo will remain in effect until May 31, 2019. The fifteen-member Security Council adopted the measure with nine in favor—including the United States—and six abstentions—including veto-wielding members China and Russia. In 2016, the United States had failed to win enough support for its arms embargo proposal.

In May, the White House issued a sternly worded statement in which it expressed displeasure with the government in South Sudan and announced the start of a comprehensive review of its aid programs to that country. The White House statement accused the leaders of South Sudan of having “squandered this partnership [with the United States], pilfered the wealth of South Sudan, killed their own people, and repeatedly demonstrated their inability and unwillingness to live up to their commitments to end the country’s civil war. The result is one of Africa’s worst humanitarian disasters.”

In an earlier interview with the New Atlanticist, Pham said the United States should consider imposing sanctions on Kiir and Machar if there is to be any real possibility of breaking the cycle of violence in South Sudan.

“The only way we are going to move to peace is to have sanctions that target those most responsible for the ongoing conflict, the networks by which they make their money exploiting the war economy, and then delegitimizing and marginalizing them as actors,” said Pham.

Deng said the United States must not turn its back on South Sudan. “One of the mistakes you have made is you have distanced yourselves” from South Sudan, he said. “Don’t abandon us.”

Image: “We have disappointed you, but we are capable of coming back,” South Sudan’s First Vice President Taban Deng Gai said at the Atlantic Council in Washington on October 2. Awut Deng Acuil, South Sudan’s minister of gender, child, and social welfare, is on the left. (James Wholley/Atlantic Council)