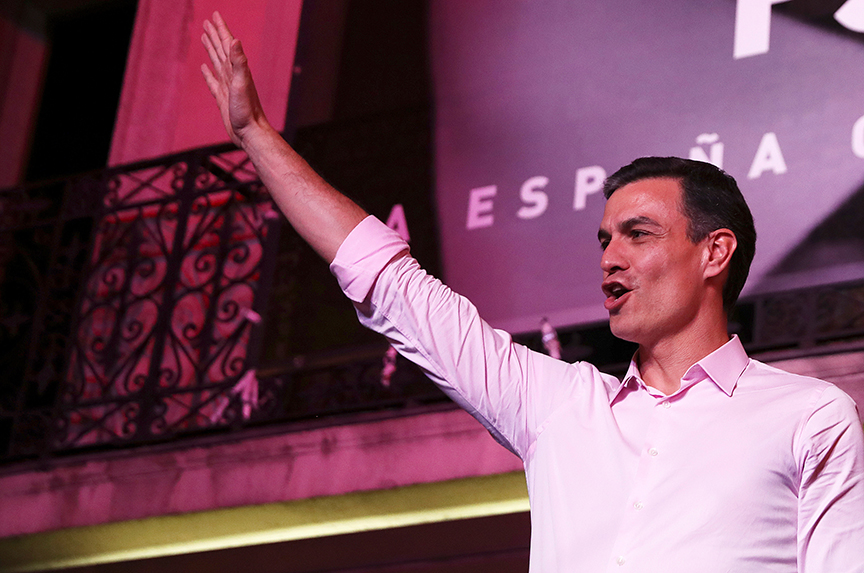 Spanish Prime Minister Pedro Sánchez bucked a European trend on April 28 when he won a victory for his center-left Socialist Workers’ Party (PSOE) in parliamentary elections. The right-wing People’s Party (PP), by contrast, suffered the same fate as conservatives elsewhere and lost support to the far right. Both stories come with a unique Spanish twist.

Many social democratic parties in Europe have lost voters to both the nativist right and the progressive left. Spain’s far-right Vox appears to have gained entirely at the PP’s expense while the Socialists ate up the far-left Unidas Podemos (“Together We Can”). Fear of a right-wing government that would be dependent on the anti-immigrant and anti-feminist Vox drove left-wing voters to the PSOE. But Sánchez also made two strategic decisions that helped the center-left.

First, he made a deal with Podemos, which meant a vote for either was effectively a vote for both. The center-right Ciudadanos (“Citizens”), the fifth-largest party in Spain, had ruled out a coalition with the Socialists, taking the centrist alternative to either a center-left government supported by the far left or a right-wing government supported by the far right off the table. This gave voters on the left and in the center no choice: if they wanted to keep Vox away from power, their best bet was to vote for the PSOE.

Second, Sánchez ran on pro-European, pro-immigration, pro-feminist platform. Social democrats in France, Germany and the Low Countries have tried to have it both ways, promoting a progressive agenda to younger and urban voters and protectionist policies to their traditional working-class base. That convinces no one.

The PP made the same mistake. It moved to the right on everything from abortion to immigration to how to deal with the independence movement in Catalonia in an attempt to stem defections to the far right, but Vox was always willing to go one step further. If PP leader Pablo Casado mused that abortion rights were too liberal, Vox called for restricting them. If Casado argued that Spain should take in fewer migrants, Vox argued for closing the border. Both the PP and the Citizens argue for suspending Catalonia’s autonomy; Vox wants to abolish Spain’s system of autonomous governments altogether and centralize power in Madrid.

Not only did Casado’s lurch to the right fail to impress far-right voters, it disappointed liberal-minded, pro-business voters, who had an alternative in the Citizens. The PP saw its support cut in half, from 33 percent in 2016 to 16.7 percent — its worst result ever.

Because the Spanish electoral system gives a bonus to the largest party, the combined right will have fewer seats in the new Congress, even though the PP, Citizens, and Vox got more or less the same share of the vote as the PP and the Citizens received between them three years ago.

Therein also lies the challenge for Sánchez. He gained thirty-eight seats for the Socialists, but Podemos lost twenty-nine. Together they are eleven seats short of a majority. Basque nationalists, who supported Sánchez’s last government, have ten. Sánchez will have to reach out to regional parties from the Canary Islands, Cantabria or Valencia — or do a deal with the separatists who won the election in Catalonia.

The first option would allow tiny parties with only one or two seats to hold the whole government hostage, but Sánchez might prefer it to the alternative. Catalan parties helped him to power a year ago but conditioned their support on a legal independence referendum for the region. Sánchez — unlike his center-right predecessor — has been willing to talk about transferring more money and power to Catalonia, but a referendum goes too far. For the Catalans, mere talks about more autonomy are no longer enough. But for the right, mere talks are already too much. Even the PP and the Citizens have called Sánchez a “traitor” for being willing to negotiate with the separatists.

Talks are the only way out, but in such a heated political climate, Sánchez may be wise to separate them from the stability of his government.