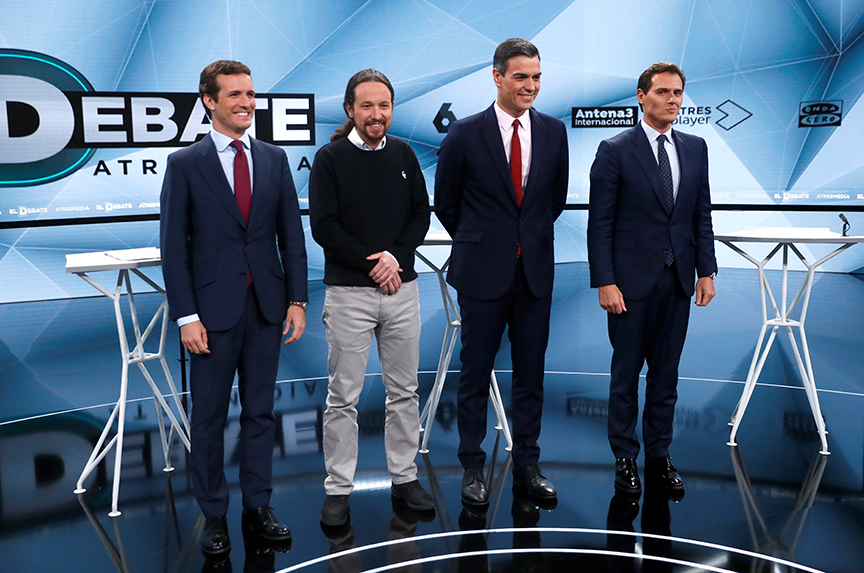 Spaniards will vote on April 28 to renew parliament for the third time in four years. Spanish Prime Minister Pedro Sánchez’s center-left Socialist Workers’ Party (PSOE) leads in the polls, but with just 30 percent of support. The latest surveys show only a grand coalition of both left and right parties, or a left bloc supported by some regional parties that support Catalan independence, can reach the majority needed to form a government, but much will depend on the 40 percent of still undecided voters.

The elections follow eleven months of Sánchez’s PSOE minority government, which came to power after Mariano Rajoy’s center-right People’s Party government lost a vote of no confidence on June 1, 2018. Rajoy’s government had been supported by Ciudadanos, a center-right party founded in 2006 with a focus on addressing corruption, market liberalization, and a robust anti-secessionist stance.

Soon after Spain’s full return to democracy in 1978, the political landscape stabilized with two major parties (People’s Party and PSOE), one or two smaller parties with national scope, and a number of parties with representation in single states (autonomous communities). The last of these played a critical role in supporting single-party national governments when the left- or right-of-the-center national parties did not win enough seats to form a government on their own.

Five years ago, the political landscape changed. The social consequences of the 2000’s boom and the 2008 financial crisis, corruption, and the secessionist movement in Catalonia were key factors that led to the fragmentation of votes and mainstream parties.

The accession of Spain to the European Union (EU) in 1986 and then to the euro area in 1999 brought about an influx of cheap external financing that underpinned a surge in private and public consumption and real estate investment. High economic growth and associated fiscal revenues, coupled with fresh political decentralization and expenditure devolution to state and local governments, created the conditions for inefficient management, corruption, and illegal financing of political parties.

The unsustainable boom came to an end with the 2008 global financial crisis. A deep and long recession resulted, accentuated by the accumulated over-indebtedness of Spanish households and firms. Not surprisingly, discontent grew from the public perception that the benefits of the boom and the costs of the crisis were unevenly distributed. PSOE and the People’s Party lost voters’ support because of mishandling of the crisis, corruption in their ranks, and the austerity measures. Podemos emerged in 2014 as a new movement and quickly managed to rally those left behind with an anti-establishment, simplistic, fiscally inconsistent platform.

In Spain’s northeastern region of Catalonia, nationalist parties built on discontent and a crisis-hit central government and presented secession from Spain as the local solution to the crisis and the realization of a dream. Skillful marketing, delusion, and very often sloppy responses from the central government, accelerated the secession dynamics that led to the polarization of Catalan society, a declaration of independence by the Catalan parliament in 2017, and the subsequent prosecution of its leaders. Although many Catalans resent having been misled by their leaders, supporters of secession are still estimated to account for close to 50 percent of the Catalan population.

Mainstream parties are deeply divided on the way forward. PSOE and Unidas Podemos—an alliance formed by Podemos and other left-wing parties in 2016— advocate combining legal enforcement with political dialogue toward a new equilibrium within the constitutional framework since they believe judicial action alone will exacerbate the political problem. Unidas Podemos is ready to go further in accommodating Catalonia and the Basque Country in a reformed constitution with more devolution.

On the other hand, the People’s Party mistrusts dialogue with parties that defy the constitution and has proposed to freeze the powers of the Catalan self-government and take control back at the central level.

Ciudadanos takes an even harder line pointing to the tendency of Catalan regional and local governments to alienate the rights of non-secessionist citizens.

Even more extreme is Vox, a recently created far-right party, which focuses on the unity of Spain and has proposed a return to a centralized state.

Implications for the economy

Based on the latest polls, political uncertainty may remain after the elections. This will be a drag on the economy. PSOE will have to look left and right to build a governing coalition. The parties with the second- and third-most votes may not be enough to reach a majority. (Polls show People’s Party with an estimated 20 percent of support and Unidas Podemos with around 15 percent.) In this case, PSOE would need to secure at least tacit support from regional secessionist parties, which may prove both difficult and lead to instability in the government.

Moreover, both Ciudadanos and Unidas Podemos do not have governing experience at the central level. They face a steep learning curve in joining coalitions, even though they have acquired some expertise in regional coalition governments.

Last but not least, a disregard for facts and a sudden, though limited, surge in support for a vocal far right have found their way into the Spanish political debate.

Unemployment, a weak economy, and pensions are Spaniards’ top concerns. While unemployment has decreased from 24.5 percent in 2014 to 15.6 in 2018 and is expected to continue to decline, most newly created jobs are precarious. Short-term temporary contracts became the standard pattern for new jobs and on their expiry were repeatedly replaced with similar contracts, putting pressure on wages and working conditions. All the major candidates have proposed to reduce or eliminate the pervasive use of short-term temporary contracts and alleviate the tax burden on the self-employed.

Spain’s economy grew at 2.6 percent in 2018 down from rates exceeding 3 percent in recent years. Forecasts for the near future are more modest, reflecting lower external demand and a necessary fiscal retrenchment given the 2.7 percent of GDP fiscal deficit and almost 100 percent of GDP government debt last year. The government introduced a budget for 2019 with a deficit reduction of 0.4 percent of GDP, but failed to secure parliament’s approval.

Agreeing on the fiscal chapter of a coalition program may prove difficult since the main parties’ economic plans are much more explicit on tax reductions than on the balancing revenue increases and expenditure cuts. Nor will it be easy to agree on measures to advance reforms, boost productivity, and address the sustainability of the pension system.

Nevertheless, no party is openly defying the EU’s fiscal framework in the short run, even though Unidas Podemos proposes the derogation of the constitutional limits on fiscal deficit and debt, implemented in 2011 in the middle of the financial crisis. One can hence expect moderate budgets after initial skirmishes.

Implications for European and transatlantic relations

Spain ranks fifth in the EU and fourteenth among the world’s largest economies. Surveys show that a vast majority of Spaniards consider themselves citizens of the EU and place greater confidence in the EU than in national politicians and institutions, notwithstanding their critical view of EU management. Spain has nevertheless punched below its weight in both European and global economic governance. This has changed in recent times with appointments to top government positions of men and women with European exposure that provides them a better understanding and capacity to engage with European partners.

If political stability is achieved—indeed not a small if—the elections in Spain on April 28 can bring not only fresh democratic blood to Spanish governance, but also a more robust partner to the European project and transatlantic relations.