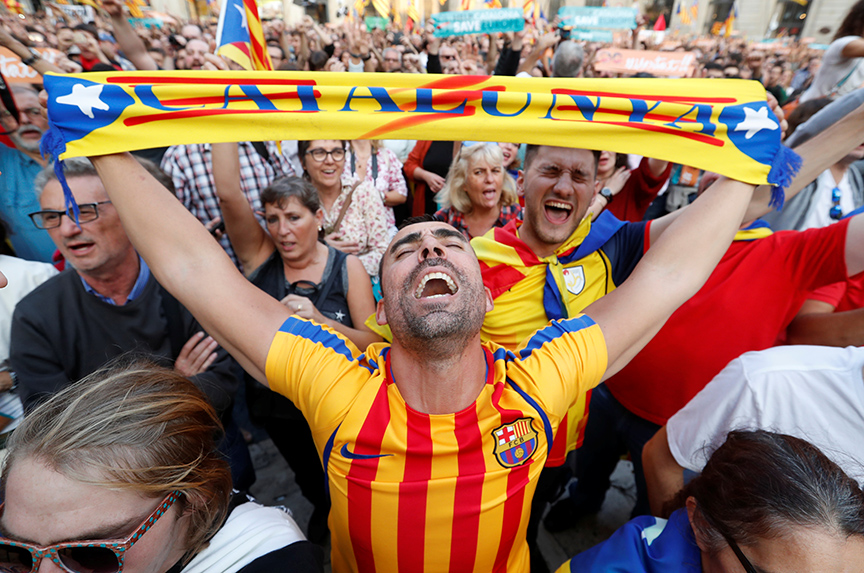 The crisis in Spain dramatically escalated on October 27 with Catalonia’s regional parliament declaring independence and the Spanish Senate responding with the approval of unprecedented powers for Madrid to seize control of the autonomous region.

Spanish Prime Minister Mariano Rajoy called an emergency cabinet meeting and could fire Catalan President Carles Puigdemont and his ministers—he now has the power to do so under Article 155 of Spain’s constitution. Under these circumstances, the Spanish government would take control of Catalonia’s finances, police, and publicly owned media.

“The question is going to be: how does the Spanish government implement Article 155 in the wake of the declaration of independence,” said Fran Burwell, a distinguished fellow at the Atlantic Council.

[Update: The Spanish government, late on October 27, took over control of Catalonia, dissolved its parliament, fired Puigdemont and the head of the regional police force, and ordered regional elections to be held on December 21.]

Puigdemont came close to calling snap elections on October 26, but then left it to the Catalan parliament to decide on independence. In Barcelona, lawmakers opposed to independence for Catalonia walked out of the chamber in protest ahead of the vote on October 27.

Pointing to this boycott, Burwell said that there are “clearly questions about the constitutionality, legitimacy, legality of the vote in the parliament under those circumstances.” But, she added, “that doesn’t mean that there won’t be significant public resistance to a heavy-handed approach by Madrid to implement Article 155.”

“It is one thing to take over finances, even another thing to take over public media, but to replace the local police and bring them under control is likely to be a very real challenge and create a serious possibility of violence,” she added.

Carles Castello-Catchot, chief of staff in the Atlantic Council’s Brent Scowcroft Center on International Security, said the Catalan parliament’s decision to declare independence from Spain “will not stand.”

“With the Spanish Senate’s authorization, Rajoy has the power to cut the secessionist process’ legs,” he added.

Ahead of the vote on invoking Article 155, Rajoy had told senators that Spain needed to return “law, democracy and stability” to Catalonia.

“What’s threatening Catalonia is not Article 155 but the behavior of the government of Catalonia,” the prime minister said.

Castello-Catchot predicted that Rajoy will move fast to suspend Catalonia’s autonomy and remove Puigdemont’s government. “The Catalan parliament’s vote for independence, for which half of the popular representatives were absent in protest, shows the weakness of this Kafkian process,” he said.

The European Union has been reluctant to intervene, describing the crisis as an internal matter for Spain. After the Catalan parliament’s vote, European Council President Donald Tusk tweeted: “For EU nothing changes. Spain remains our only interlocutor. I hope the Spanish government favours force of argument, not argument of force.”

The recent crisis was triggered after the Catalan government went ahead with an independence referendum—deemed illegal by Spain’s constitutional court—on October 1. The regional government said that of the 43 percent of voters who took part in the referendum, 90 percent had voted in favor of independence for Catalonia. Around 900 people were wounded in a crackdown by police deployed by the Spanish government in an attempt to block the referendum.

Castello-Catchot emphasized the importance of monitoring Catalan society’s reaction to the latest developments. “It’s in no one’s interest to see the tensions and violence that surrounded the ‘referendum’ on October 1 repeated,” he said.