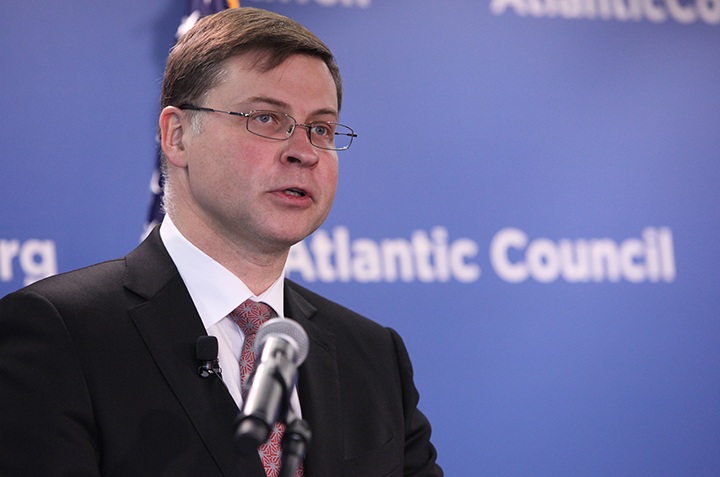 The European Commission’s economic policy priorities have remained unchanged since last year’s World Bank and International Monetary Fund Spring Meetings; Europe’s political and societal context in which these policies must be implemented, however, has changed fundamentally, according to a European Commission official.

The 2016 World Bank and IMF Spring Meetings that bring together financial leaders from across the globe are taking place this week in Washington.

“So, I come here with largely the same message as my speech last year…Our main economic policy priorities remain unchanged, so what we need to concentrate is on implementation…Geopolitical fragility threatens to overshadow everything else. We need a strong economy and sense of unity to cope with all these challenges,” Valdis Dombrovskis, Vice President for Euro and Social Dialogue of the European Commission, said at the Atlantic Council on April 15. The event was hosted by the Council’s Global Business and Economics Program.

The EU Commission’s economic policies have reaped benefits as evidenced through stable recovery conditions of EU member states in 2016 with the exception of Greece, he said. The implementation of these policies has become increasingly complicated with the series of challenges—which are naturally divisive in nature—facing Europe.

Dombrovskis, a former Prime Minister of Latvia, said that the European Union’s top priorities are to relaunch investment, carry out structural reforms across the bloc, and uphold responsible fiscal policies. These priorities do not vary greatly from the previous year, but Europe must adapt its social economic model, strengthen the foundations of its institutions, expand its economic toolset, and increase agility to take on today’s challenges.

“The bigger picture is political, it all starts as a political will to move ahead together. Within Europe and around world, there is a clear sense of what is at stake. We need more cooperation, new forms of integration and solidarity,” he said.

Uncertainty looms around the EU’s handling of the migrant crisis—the largest movement of people since World War II—the upcoming referendum in the United Kingdom on whether it will remain in the EU, and the bloc’s relations with Turkey and Ukraine.

IMF report could alter EU figures, but without ‘major shifts’

Dombrovskis, who assumed his role as Prime Minister of Latvia in the heat of troubling economic times in March of 2009, said that the EU Commission may adjust its figures in an updated macroeconomic forecast in May, incorporating the IMF’s assessment, but that “no major shifts” should be expected in the new forecast.

The IMF’s lowered expectations led many analysts to conclude a dimmer outlook for the global and European economy, but Dombrovskis pointed to positive recent developments. EU exports have surpassed pre-crisis levels, reaching $6 trillion in 2015 while they were $4.1 trillion in 2004.

The Commission has introduced a macroeconomic governance framework to better coordinate policy among member states, and implemented a macroeconomic imbalance feature to detect and address imbalances early on. These reforms, among others, to the economic and monetary union have paid off, he said, as very little spill-over effects have occurred from the Greek crisis in other member states.

A Youth Employment Initiative providing member states with EU financing to facilitate jobs, or the training to adapt to changing labor market conditions, has addressed the issue of unemployment. EU unemployment fell to ten percent in 2015, and is expected to fall to nine percent in 2016.

Two more Transatlantic Trade and Investment Partnership (TTIP) negotiations are expected to take place while US President Barack Obama is still in office—one later this month in New York and another in July in Brussels. Negotiations for the Trans-Pacific Partnership (TPP), agreed upon last fall, diverted the United States’ focus from TTIP. Dombrovskis expressed optimism about completing the agreement while Obama is in office, given the benefits it would bring to both sides of the Atlantic.

Ahead of the June 23 British referendum, leaders are tip toeing around the debate about the United Kingdom’s future in the EU. The right balance—of giving advice on the direction that the United Kingdom should take, while avoiding putting too much pressure on the British who must make a clear-headed decision for themselves—is difficult to strike.

The number of migrants coming to Europe has recently dropped due in part to the controversial EU-Turkey deal and Balkan route closure, but the economic impact of continued migration and settled refugees remains widely contested. The fall of the Schengen Zone would have far-reaching effects on the EU and member state economies as the flow of goods and services would face significant barriers.

In the short-term, Dombrovskis said the main challenges of the refugee crisis are security and humanitarian. In the long term, he emphasized that a positive economic impact will be dependent on the EU’s ability to integrate refugees into labor markets. Affirmative examples of this already can be seen in Germany where employment rates have not been affected.

Susan Haigh is a Program Assistant with the Atlantic Council’s Future Europe Initiative.

Image: “Within Europe and around world, there is a clear sense of what is at stake. We need more cooperation, new forms of integration and solidarity,” Valdis Dombrovskis, Vice President for Euro and Social Dialogue of the European Commission, said at the Atlantic Council on April 15. (Atlantic Council/Victoria Langton)