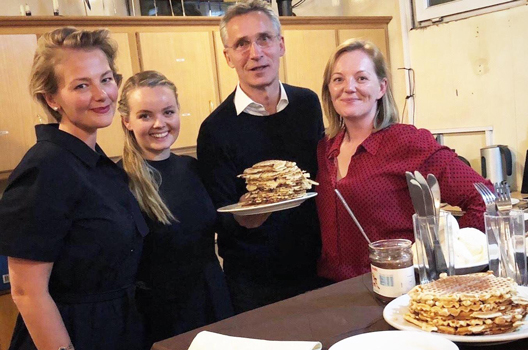 Iceland has no military, but a young Icelander is spearheading an important NATO mission in one of the world’s most dangerous war zones: Afghanistan.

Alfrun Perla Baldursdottir’s main task is improving the situation for women in a nation where gender inequality is so all-encompassing that “it’s like women are living in a totally different country than men,” she said.

The 26-year-old is also trying to empower young people—those under 25—who account for a whopping two-thirds of Afghanistan’s 37 million people.

To give NATO Secretary General Jens Stoltenberg a firsthand feel for Afghanistan’s civil challenges, Baldursdottir and her two Icelandic colleagues in the country arranged for him to talk with about twenty women and youth when he visited in November 2018. They also cooked Scandinavian waffles to make Stoltenberg—a Norwegian—feel at home.

Afghanistan’s civil-society challenges are daunting, Baldursdottir said. Iceland has been working to help the country bridge the gender gap for more than a decade, and while progress has been made since 2001, when a US-led invasion toppled the Taliban government, the divide remains enormous, she said.

Two things have cheered Baldursdottir, however: In the few months since she became a NATO political observer in Afghanistan, she’s met a number of local women with the courage to challenge the status quo. And she’s developing a sense that young Afghans place a higher priority on democracy and human rights than the older generation.

“I’ve met many incredible women trying to make the situation better”—several of whom are putting their lives on the line, Baldursdottir said.

One, Maria Bashir, is the country’s first female prosecutor. The resident of Herat in western Afghanistan “is getting death threats every day for what she does,” Baldursdottir said.

Another is Sarina Faizy, a politician in her early 20s from the southern city of Kandahar, who is fighting for women’s rights, universal education, and peace.

Since Iceland has no defense ministry, the NATO teams it has dispatched to Afghanistan, Georgia, and Lithuania are part of its Ministry of Foreign Affairs. The team’s peak strength in Afghanistan was seventeen people working at Kabul International Airport in 2004 and 2005.

Baldursdottir spends about half her time at her NATO base in Kabul—which she declines to name for security reasons—and half off-base.

In addition to meeting with Afghan women and youth, most of the off-base work involves talking with representatives of United Nations agencies and foreign embassies to obtain a better grasp of civil society’s needs.

Baldursdottir hopes the fact-finding allows her to draft sound gender- and youth-related policy recommendations for NATO and other international organizations in the months ahead.

She is already working with Afghanistan’s foreign ministry on a key policy project: refining an action plan that the country adopted in 2015 to implement a UN call for women to play a larger role in peace processes.

The UN Security Council adopted Resolution 1325 in October 2000. Recognizing that women are a powerful force for peace, it asked countries to have them play a larger role in preventing and resolving conflict, in easing war-generated humanitarian crises, and in post-conflict reconstruction.

Baldursdottir brought impeccable credentials to her work in Afghanistan.

To start with, the World Economic Forum has designated Iceland the country with the smallest gender gap for ten years running, reflecting widespread public acceptance of the issue’s importance. In contrast, Afghanistan has ranked near the bottom of the 147 countries on the gender-equality list.

“When you hear the story of a 13-year-old getting married, being abused by her husband, and she can’t go back to her family—it’s almost an everyday thing in Afghanistan,” Baldursdottir said. “In Iceland, if you would hear one of these stories, the whole society would turn upside down and would try to save that woman.”

In addition to a society-rooted sensibility about gender equality, Baldursdottir brings a bachelor’s degree in political science from the University of Iceland and a master’s in conflict studies from the London School of Economics. The focus of the master’s was perfect for her current task: Women in Peace and Security.

A principle she is stressing in her Afghanistan work is that women need a voice not just on gender issues, but on all issues affecting society.

“There’s so much that has to be done, it’s very hard to decide where to start,” she said. “I think the starting point is to include women everywhere, to have them at the table so that their voices can be heard. Their experience is so different—it’s important to include that when we’re talking about peace negotiations, about  education, about security.”

Baldursdottir also hopes her work affects NATO’s thinking about gender. “What my office can do is to try to mainstream gender into every aspect of NATO,” she said. “It’s very important to put the issue of gender-based violence and women’s rights front and center every day in how we train soldiers, in how we operate in the field, and how soldiers interact with civilians when they find themselves in combat zones.”

When she leaves her base on business every other day, Baldursdottir dons a flak jacket, although she said she has yet to worry about her safety because of the diligence of the German commander who provides security for off-base travel.

It’s a far cry from Iceland, a peaceful country of a third of a million people whose only remotely military-style organization is a coast guard and whose police carry no guns.

Baldursdottir said what she misses most because of the security situation in her new post is the freedom to visit friends when she wants and to take long walks in nature.

But she’s been pleased at the base’s congeniality.

It’s “such a nice community” that it feels more like a college campus than a military facility, she said.

“I really like the atmosphere,” she said. “They have a lot of different activities you can join in, and everyone is very welcoming.”

About 150 of the base’s 1,800 residents are women, with civilians accounting for perhaps 5 percent of the population.

Another pleasant surprise has been how good the food is — “especially breakfast,” Baldursdottir said. Many NATO countries make a special effort to provide top-flight cuisine to soldiers and civilians in remote or dangerous posts.

The food was even more fabulous at an Italian base Baldursdottir visited in western Afghanistan. The well-trained chefs served up exquisite homemade pasta, she said.

While the camaraderie and food make her life in Afghanistan brighter, she receives sobering reminders every week about why she’s there.

“It’s heartbreaking to hear the women’s stories,” she said. “Everything that women do here is affected by their gender.”

Encouraged by NATO members like Baldursdottir and others in the international community, women like prosecutor Maria Bashir and politician Sarina Faizy are determined to blaze a new path for their country.