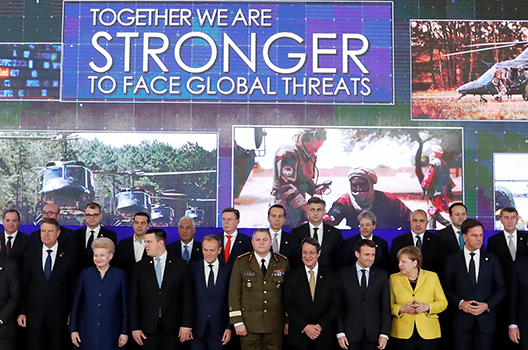 According to an EU-wide survey by the European Council on Foreign Relations (ECFR) in 2018 of respondents who work on European policy in governments and think tanks, Sweden is the ninth-most influential country in the European Union (EU). The survey also shows that Swedish respondents believe that France and Germany have the biggest influence over the Common Security and Defense Policy (CSDP) but that communication channels between Stockholm, Paris, and Berlin are weak.

Sweden stands to gain from more active participation in the defense discussions in France and Germany. It could, for example, exercise more influence over future European frameworks for defense as well as simultaneously strengthen its relationships with Paris and Berlin.

In a recent op-ed by the Swedish Foreign Minister Margot Wallström and Defense Minister Peter Hultqvist, the ministers state that “the EU should act together with our partners when it is possible, and alone if necessary.” This comes close to the general thinking among policy makers and experts on what strategic autonomy encompasses. Therefore, it is surprising that the ministers are actively refraining from using the concept.

Within security and defense, European strategic autonomy spans three dimensions: political, operational, and industrial autonomy. All three are important and have implications for Swedish defense and security. However, for Sweden, European strategic autonomy has mainly been about “the possibility of Europeans doing something together out-of-area at a higher threat level, without being dependent on the United States wanting or being able to participate,” according to Anna Wieslander, director for Northern Europe at the Atlantic Council.

Wallström has put forward the goal that the EU should be “a world leader” in civilian crisis management. Sweden’s strategy to strengthen the civilian pillar of CSDP toward that end succeeded with an agreement to establish a civilian CSDP compact in November 2018.

In contrast to the civilian dimension, Sweden has been hesitant about the territorial and military aspects of European defense and strategic autonomy due to worries that it would risk undermining the transatlantic alliance and negatively impact the Swedish defense industry.

If Sweden were to more actively participate in the comprehensive debate about European defense and especially strategic autonomy, it could advocate for a version of strategic autonomy that takes more responsibility for European security, while also preserving strong transatlantic ties. If European strategic autonomy was more about creating self-sufficiency and responsibility, it could help strengthen both the EU, NATO, and the transatlantic link and would fit well with Sweden’s interests. On proposals from the European Commission to strengthen the European defense industry, Swedish and Nordic projects could gain more explicit support from Brussels if there were more political action.

Moreover, with the European Defence Fund (EDF), the EU is seeking to strengthen the European defense industry with approximately €13 billion in the EU’s next long-term budget (the Multiannual Financial Framework). Swedish taxpayers’ money will go into the fund. Sweden has a strong defense industry and a lack of strategy raises the risk that there will be no return on this investment.

The EU is Sweden’s most important foreign and security policy arena. If Sweden wants to play a central role in creating a more capable Europe, it needs to focus on EU institutional procedures as well as on providing clear answers to proposals from Paris, Berlin, and Brussels. If Sweden is unable respond to and communicate concrete suggestions, its influence over the future direction of the EU defense cooperation will be minimal.

Swedish policy makers should do more to develop and publicly communicate a comprehensive vision for European defense to optimize influence within the EU and to ensure that the country’s important perspectives are reflected in emerging concepts such as strategic autonomy. The Swedish government could do this by:

While actions speak louder than words, words matter. If Sweden were to more actively seek to form and communicate a vision of European defense and, specifically, strategic autonomy, it would be able to exercise even more influence in an important policy area.

Image: EU leaders take part in a group photo on the launching of the Permanent Structured Cooperation, or PESCO, a pact between 25 EU governments to fund, develop and deploy armed forces together, during a EU summit in Brussels, Belgium, December 14, 2017. (REUTERS/Yves Herman)