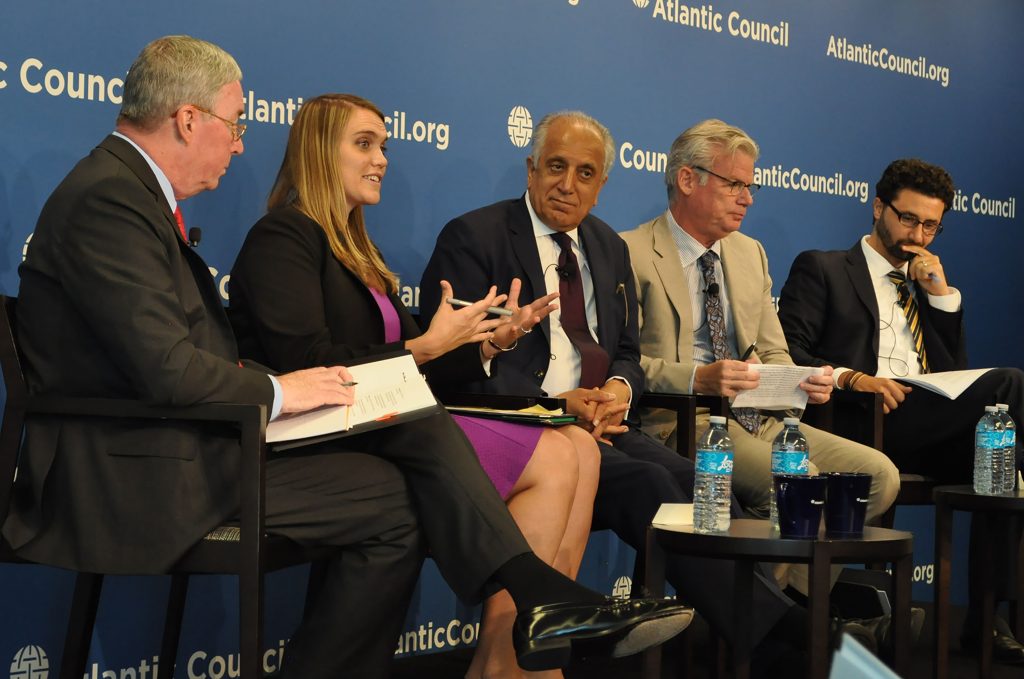 From left: Retired Vice Adm. John W. Miller, former commander of the United States Fifth Fleet, moderated a discussion with Kelsey Davenport, director for nonproliferation policy at the Arms Control Association; Zalmay Khalilzad, former US ambassador to Afghanistan, Iraq, and the United Nations, and president of Gryphon Partners; Michael Elleman, consulting senior fellow for missile defense at the International Institute for Strategic Studies; and Bilal Y. Saab, senior fellow and director of the Middle East Peace and Security Initiative at the Atlantic Council.

Iran’s missile program should “rank among the highest priorities of US national security concerns,” said Zalmay Khalilzad, a former US ambassador who serves on the Atlantic Council’s board of directors.

In a parade on September 21, Iran’s “military displayed long-range missiles, tanks, and the Russian-supplied S-300 surface-to-air defense system,” according to a Reuters report.

“It’s not out of the question that over time the Iranian missile program could pose a threat to…the United States itself, and to its allies in Europe,” said Khalilzad, who served as the US ambassador to Afghanistan, Iraq, and the United Nations in the George W. Bush administration. He is president of Gryphon Partners, a global advisory firm.

Iran, which developed its missile program as a defensive feature during its war with Iraq in the 1980s, has since increased the range and accuracy of its missiles. “They’re going for greater accuracy, greater lethality,” said Khalilzad. He claimed Iran’s enhanced capabilities further threaten the security of Gulf states, as well as US interests in the region, necessitating a strategic response from the United States.

Not directly affected by the agreement to curb Iran’s nuclear program, Iran’s missile program has continued to grow. However, according to Elleman, “at least for the next decade or so, we’re talking about conventionally armed missiles, not nuclear missiles.” While ballistic missiles cannot turn the tide of war, unlike nuclear weapons, said Elleman, it is the trajectory of development and increasing risk that causes concern.

Iran’s missile program remains limited by the need to master, test, and acquire new technology. “This is not something that’s going to occur overnight…unless they got extensive foreign assistance from Russia or China,” said Elleman. He asserted “probably the most important thing for us to do now is keep a watchful eye and make sure the Russians and Chinese aren’t helping them.” As reported by Reuters, the United Nations on September 26 sanctioned a Chinese industrial machinery and equipment wholesaler tied to North Korea’s nuclear program.

Concerns regarding Iran’s receipt of foreign assistance demonstrates, according to Khalilzad, that “there is a global dimension to this program.” Khalilzad asserted, “our intelligence community’s assessment appears to be that if they [Iran] decide to…develop an intercontinental ballistic missile (ICBM), we’re talking about maybe a decade.” Though the threat of an ICBM is not immediate, ten years is “not a very long time in terms of military planning when you think about the future of the world,” he said. However, Davenport asserted that there is no direct indication that an ICBM is Iran’s ultimate goal.

According to Khalilzad, while “the homeland security issue ultimately cannot be put aside completely… the emphasis is on the region.” He contended that “the missile program of Iran is part of a set of undesirable…developments in the region that affects our interest in a region that poses some of the most urgent national security issues that the world faces.”

With the ongoing conflicts in Syria and Iraq, alongside the proliferation of terrorism and sectarian violence, Saab said that Iran does “have an interest in elevating their status in the region.” He asserted that, “as important as it is to try to analyze how the Iranians might use these more accurate missiles, I think it’s also useful to at least try to understand why they might use them. I think intentions matter here.”

While Iran seeks to advance its capabilities and influence in the region, it must still consider its far more powerful adversaries, according to Saab. He asserted that the Arab Gulf states should increase their efforts for missile defense integration to counter the threat posed by Iranian missile capabilities. “The ball is in their court,” he said. “There is so much more that they should be doing that they haven’t done to achieve higher levels of [missile defense] integration.”

Ultimately, “it goes back to issues that have nothing to do with weapons,” according to Saab, namely US stakes in the region. He asserted that Iran must focus on achieving its aim for increasing control in the region without provoking the United States to forceful intervention. Saab said: “It’s a very tricky balance, and because there is an inherent risk in escalation, they have to think very hard about how to use those [more developed missiles].”

In the report, Saab and Elleman outline actions Iran could take, specifically targeting US and regional assets in the Gulf, and the risks associated with regard to a forceful US intervention. “Our ultimate objective in that region is still regional stability,” Saab said.

“It may well be that these increased missile capabilities will still be used for augmenting their own deterrence, so, bottom line, they might not have to use them at all. This is just to send a message to their adversaries,” according to Saab. However, “if you’re sitting in the Pentagon, specifically if you’re a strategic planner, you can’t just settle for ‘This is just for deterrence,’ you really have to think about…contingencies,” Saab said. “You have to think about them, you have to plan for them, and you have to strategize for them.”

According to Elleman, “I think we need to look more at the war-fighting capacity they’re trying to develop and how we’re going to defend against that.”

Preparing for these contingencies can include not only military measures, but also diplomatic and political means in place to hinder the development of an ICBM, should Iran choose to pursue that path. “Iran has not viewed these restrictions placed on it, first in 2006, and then the testing restrictions…in 2010…as impeding the development of its program,” Davenport said. “It’s never recognized them as legitimate,” she added.

Iran’s development of a more threatening missile program should not be overlooked, said Davenport, asserting that “we shouldn’t be complicit about Iran’s activities.”

Consequently, Davenport’s focus remains on precautionary measures, set in place should Iran choose to follow a more threatening path. She claimed, “we should look at some of these areas that might help support the sanctions that are in place now, and continue to act after the sanctions so that if they do choose that path [of developing an ICBM], there are still impediments in terms of getting the technology and material that would be helpful.”