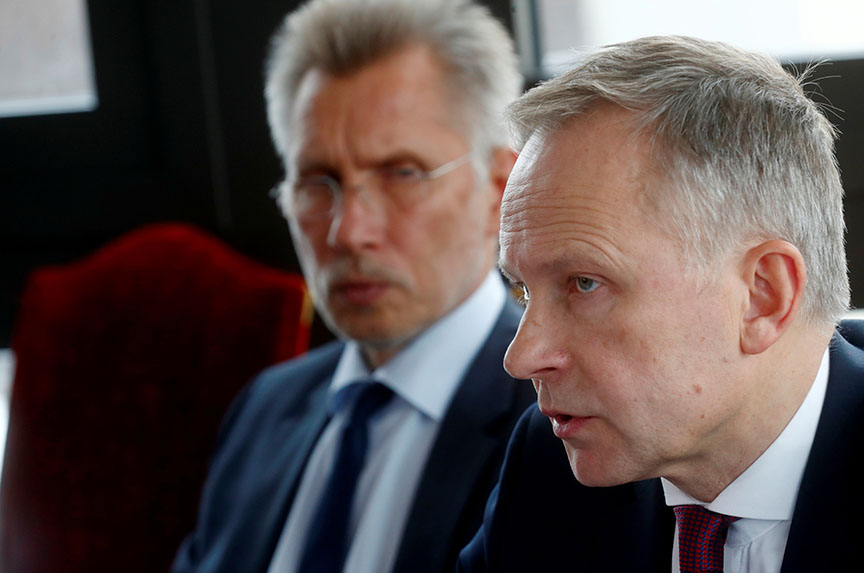 Two developments have rocked the Latvian banking system in recent days. Last week, the country’s third-largest bank, ABLV Bank, was accused by the United States Treasury Department of systematic money laundering and aiding in the circumvention of the sanctions imposed on North Korea. Separately, Latvian Central Bank Governor Ilmars Rimsevics, one of the longest-serving central bank heads in Europe, was held over the weekend by Latvia’s anti-corruption authority after he was accused by officials at Norvik Banka of having demanded a bribe. As of now, the two developments appear unrelated.

New problems from an old business

The accusations against ABLV Bank remind us that a significant part of Latvia’s banking system has long catered to foreign clients, especially from Russia and other former Soviet states. In fact, most of Latvia’s population itself gets its banking services from the subsidiaries and branches of Nordic (mostly Swedish) banks.

The business of taking deposits and providing other services to clients from Russia and other former Soviet states has been a feature of the Latvian banking system since the 1990s.  This business has been declining since 2015. For example, non-resident deposits in the entire Latvian banking system dropped by over 25 percent in 2016, according to the International Monetary Fund (IMF) due to the interrelated factors of (1) stricter enforcement of anti-money laundering and counter-terrorist financing regulations, (2) de-risking by Western banks and loss of inter-bank payment relationships as a result, and (3) the sanctions imposed on Russia by the United States and others.

While the IMF noted no material risk to financial stability stemming from these activities in its report on Latvia last year, it did stress the importance of strong supervision of this area of the banking system.

Follow-up by national, not European authorities

Latvia is one of the more recent adopters of the euro and one of the currently nineteen countries to use the currency. As such, the European Central Bank (ECB) shares regulatory supervision responsibilities of the country’s banking system with the Latvian central bank.

At the moment, both the money laundering investigation and the corruption charge are being followed up by domestic authorities.

While the ECB ordered all payments halted at ABLV as a measure to protect the bank’s remaining liquidity, money laundering charges are the responsibility of the national central banks. Similarly, the charge against Rimsevics is being investigated by national authorities—the Corruption Prevention and Combating Bureau of Latvia (KNAB) and the State Police of Latvia.

In recent days, commentators in Latvia and elsewhere have offered the suggestion that the charges against Rimsevics, and the sudden news flow related to the country’s banking system, may be influenced or orchestrated by Russia to affect attitudes in and towards the country. It is worth noting that Latvia is due to conduct parliamentary elections no later than October this year.

The Atlantic Council’s Digital Forensics Research Lab investigated the allegations against Rimsevics as part of its continuous #BalticBrief series, which monitors the information ecosystem and public discourse across the Baltics. The main finding at the time of this report included that accusations of a Russian connection were based on misrepresentations of circumstantial evidence, and the corruption charges may or may not be upheld in the investigation by the KNAB and the State Police.

The accusations of a Russian connection originated from a single source cited in an Associated Press report, which referenced a photo of Rimsevics with Russian businessman Dmitry Pilshchikov. There is no available evidence the photo was doctored, but the source claimed that Pilshchikov worked for Sergey Chemezov, a confidant of Russian President Vladimir Putin, at the time the photo was taken (2010). This claim was debunked.

Chemezov’s state-owned company, Rostec, did not absorb Pilshchikov’s company until 2014, according to public information. The effect of alleging a corrupt connection between the Russian president and a Latvian public official was palpable in Western media coverage, while the event was hardly reported on at all in Russian state media.

No verified information has surfaced from the official investigation into Rimsevics’ activities, outside of the limited public disclosure of the investigation’s existence by Latvia’s chief of criminal police on February 19. The Digital Forensic Research Lab will continue to monitor the ongoing situation with a specific focus on disinformation around the upcoming legal conclusion.

Bart Oosterveld is director of the Atlantic Council’s Global Business and Economics Program.