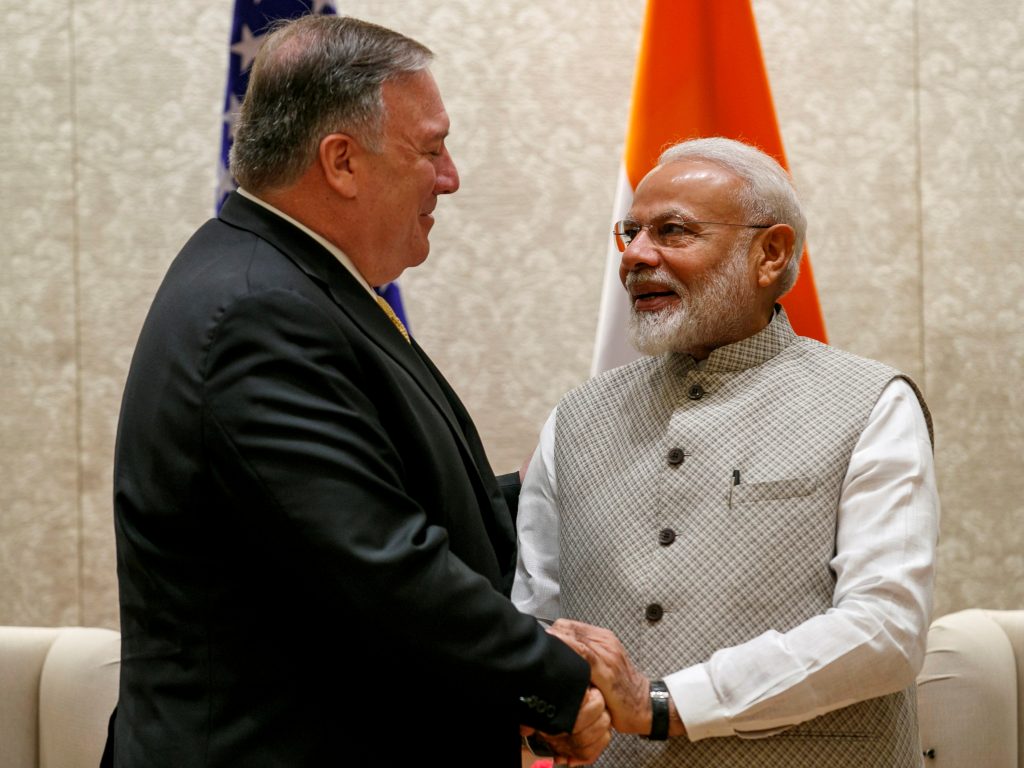 On a visit to New Delhi this week, US Secretary of State Mike Pompeo was informed by Indian Foreign Minister S. Jaishankar that India will do “what is in our national interest” when it comes to purchasing a Russian missile defense system. Despite US pressure and the threat of sanctions, the Indian government has no plans to scrap a deal to purchase the Russian S-400 air and missile defense system.

Ahead of Pompeo’s visit to India on June 25 and 26, State Department officials had urged “allies and partners, including India, to forgo transactions with Russia that risk triggering the CAATSA sanctions.” The 2017 Countering America’s Adversaries Through Sanctions Act (CAATSA) threatens to sanction countries for buying Russian weapons.

US officials have encouraged India to look at alternatives. These alternatives include the US Patriot Advanced Capability-3 (PAC-3) and Terminal High Altitude Area Defense (THAAD) systems.

India is not the only country to resist US pressure to purchase the S-400. Turkey, too, has said it will proceed with its plan to buy the Russian system despite a US warning that doing so would mean it cannot receive equipment related to the F-35 fighter jet.

The S-400 surface-to-air missile defense system is a formidable capability that can strike aerial targets at ranges up to 400 km and ballistic missiles at ranges of up to 15 km. The available alternatives—PAC-3 and THAAD—do not compare in terms of capabilities. Unlike the S-400’s 40N6 (400 km) interceptors, PAC-3 can only intercept aerial targets at a range of 180 km and ballistic missiles at a range of 100 km. THAAD, on the other hand, is strictly an anti-missile weapon system and cannot intercept aircraft.

It would be a hard sell for the United States to convince India to scrap the S-400 deal or choose US-supplied alternatives, which do not fit into Indian defense requirements because of their limited range (PAC-3) and inability to strike aerial targets (THAAD).

New Delhi is reportedly seeking a US waiver to allow the purchase of the S-400. It will, however, be difficult for the United States to make an exception for India. The United States has already sanctioned China under CAATSA for purchasing the S-400 and has warned that it will cease cooperation on F-35 fighter jets with Turkey if Ankara goes ahead with its plans to buy the Russian missile defense system—a deal to which Turkey says it is committed. Punishing India in the same way as China or Turkey could jeopardize the United States’ Indo-Pacific strategy, which is aimed at containing China. US policymakers see a strong India as a critical counterweight to China.

The United States will have to weigh the S-400’s potential utility against China. Indian analysts argue that this system is essential for India to address asymmetry with China in terms of air power. But China is already deploying the same system (against Taiwan) and would know how to take qualitative and quantitative countermeasures to circumvent the system deployed by India.

If India goes ahead with the S-400 deal US and European defense suppliers could use end user license agreements to restrict the deployment of their hardware in areas where the S-400 is operable. This concern has been a key factor in the US opposition to Turkey’s plans to purchase the S-400. Pompeo said: “It is not possible to both fly the F-35 in space where the S-400 is significantly operable.” There are indications that the United States may offer India the F-35 if it scraps the S-400 deal. If India accepts such an offer, it could lead to an interesting competition of S-400 and F-35s; both deployed in each supplier’s regional client.

Such a scenario will be determined by India’s willingness to let go of its oldest defense partner—Russia. Live Mint quoted an unidentified Indian diplomatic source as saying “[India has] a longstanding defense relationship with Russia which [India] cannot wish away.”

New Delhi is reportedly hopeful of getting a waiver.

“We meet the CAATSA conditions for waivers from our point of view,” the source told Live Mint. If India does indeed manage to qualify for a waiver, it still complicates future considerations vis-à-vis the United States’ regional strategy.

A waiver, and therefore S-400 deployment in India, will foreclose the possibility of India receiving F-35 fighter aircraft. India has already scrapped its Fifth Generation Fighter Aircraft program with Russia. In an attempt to pre-empt the US offer of F-35s, Russia has offered to sell India its own FGFA Sukhoi Su-57 jet.

Sanctioning India under CAATSA, however, could damage the United States’ relationship with India and compromise its regional strategies where India plays a central role. But, letting India go ahead with this acquisition will raise questions over the interoperability and integration of US- and European-supplied military hardware in the overall scheme of Indian defense arrangements, and the larger role that the United States expects India to play vis-à-vis China. Furthermore, creating an exception for India is unlikely to bode well with Turkey, the United States’ NATO ally. This situation will also encourage other US allies like Saudi Arabia and Qatar to go ahead with their plans to acquire the S-400 system without concern for US sensitivities or threat of ensuing sanctions.

Washington is stuck with bad options when it comes to India’s S-400 plans. Pompeo’s visit to New Delhi did not help clarify the situation. As it moves ahead with its Indo-Pacific strategy, it would be important for the United States to answer a critical question: is India willing to assume the role that Washington expects it to play?