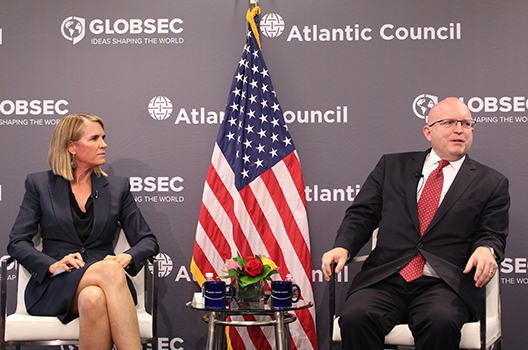 After years of disinterest and occasional disagreements, the United States has re-engaged with its allies in Central Europe at a time when their help is critical in confronting a revisionist Russia and a resurgent China, Ambassador Philip T. Reeker, the US acting assistant secretary of state for European and Eurasian affairs, said on July 17.

Reeker explained that US Secretary of State Mike Pompeo has placed an emphasis on “engaging Central Europe…as allies, as partners, as countries one and all in NATO, and members of the European Union.” The new drive resulted in Pompeo’s travel to Budapest, Bratislava, and Warsaw in February, and in formal visits to the White House by all of the leaders of the Visegrád  countries—Poland, Hungary, Slovakia, and the Czech Republic.

As documented in an Atlantic Council report on US-Central European relations, the United States was deeply engaged in the region after the end of the Cold War, when it helped to facilitate the entry of Poland, Hungary, the Czech Republic, and Slovakia into both NATO and the European Union. But Washington has been a much more distant partner for the last decade, as its attention shifted toward more pressing challenges in the Middle East and Asia.

Read more: The United States and Central Europe: Tasks for a Second Century Together

“There is a sense that some Central European countries felt that [the United States] had not given them the attention that they needed,” in this period, noted Ambassador Colleen Bell, executive director of the California Film Commission, former US ambassador to Hungary, and Atlantic Council board director. “I think that there is probably some truth to that,” she admitted. “There was a lot happening in the world at that time.”

This perceived disinterest was compounded by concern in Washington over internal developments in the region on immigration, media freedom, and the rule of law. While this worry over the direction of Central European domestic politics caused many in the United States to advocate for keeping these partners at arm’s length, Reeker said that the United States has undertaken a new approach of “principled engagement.”

“There is no question that relations with some of our NATO allies in Central Europe—Hungary is an obvious example—had become strained and tense,” he explained. But there is recognition by US officials that ignoring the United States’ Central European allies “wasn’t something that was accomplishing anything on either side of the relationship, nor benefitting the [transatlantic] alliance,” according to Reeker.

New engagement with Central Europe has meant “nice meetings that underscore [our] shared history [and] shared values,” but also “frank conversations,” Reeker maintained. He likened the relationship between the United States and all of its European allies as a family, in which “you go through good times and bad times. You have different perspectives. The principled engagement is there so that you can talk about those differences and you can maybe agree to disagree in certain cases. But you can also…make sure you make your points [and then] talk about things we can do together.”

Ambassador Daniel Fried, a distinguished fellow in the Atlantic Council’s Future Europe Initiative and Eurasia Center, argued that the rise of populist rhetoric on immigration and conservative social values in several Central European states “shouldn’t surprise anybody,” as it mirrors similar responses to “disruptive change” that have occurred throughout the United States and Western Europe. “The United States, UK, Germany, and France are going through versions of political reaction in the face of stresses,” he argued, so Central Europe should not be specially penalized for doing the same, especially given the relative youth of its democratic systems and recent experience of Soviet domination.

Reeker was clear that Washington still has many concerns about certain actions its Central European partners are taking—especially related to media freedom and the rule of law—and maintained that the United States will continue to raise these issues. Engagement, he said, “doesn’t mean that all of our differences of views or disagreements are resolved,” and added that “it does require a level of reciprocity. There is an expectation that if we are making the effort that we are going to want to see the type of good-faith, honest, direct engagement from our partners as well.”

“Central Europe for its part needs to step up,” Fried said, pointing out that US criticisms need to be heard and the fundamental values of democracy and freedom respected. As these countries celebrate thirty years since they rid themselves of the yoke of Communism, they need to remember that “Central Europe became history’s maker and not its object,” Fried observed, adding that they “can do so again.”

The time is right for re-engagement with Central Europe, Reeker argued, because their partnership is sorely needed as the United States looks to confront challenges from authoritarian regimes—chief among them China and Russia. “The agenda is long. There are great challenges,” Reeker said, which is “why our alliance, and why our partnerships and our engagement [are] so critical.”

On the first day of the Atlantic Council’s conference, US Senator Christopher Murphy (D-CT) emphasized this point, saying that “Europe matters. The transatlantic relationship today is more important than ever.”

As members of NATO and the European Union, Central Europe is crucial to maintaining a common line on opposing Russia’s illegal aggression in Ukraine and working to reduce Europe’s reliance on Moscow for energy supplies.

“Russia is on the march,” Murphy warned. “We see in and around Central Europe the opportunity Russia sees to try to undermine young democracy and gain and grow its influence.” Reeker echoed the senator’s remarks, commenting that the United States continues to work on countering disinformation campaigns with its Central European allies and is “speaking out with allies and being frank when we are concerned,” about potential malign Russian activities in their countries. Reeker also noted the growing success of the Three Seas Initiative in making sure that “new sources of energy can be developed so that countries are not dependent on the whims of [Russian President] Vladimir Putin and his policies on whether you can turn on or off the lights.”

China’s growing economic interest in Central Europe is also a source of concern for Washington, Reeker said. Partners in Central Europe—and indeed throughout Europe—need to recognize that “China’s engagement always has a strategic component,” and can often enact a greater political cost than the initial economic benefit, he argued. “China may arrive with cheap money. But what does that mean? What is the price of that money?”

Murphy concurred that more dialogue and cooperation with Central Europe can help the United States push back with China and Russia when they threaten US interests but cautioned that he worries “the way we talk about great power competition suggests a false choice for countries in the region.” Rather than “suggesting that countries in Central Europe or the Balkans have to make a choice,” between the United States and Russia or China, Murphy contended that the United States needs to build a mature relationship with these countries—one that allows them freedom to make decisions, but also ensures the transatlantic bond remains at the heart of their actions.

Policy makers in Washington need to make sure “that the United States both from a public and private sector standpoint are present in Central Europe in a way that we have not been for a decade or two, as we have taken for granted this relationship,” Murphy said. By reigniting the friendship between the United States and Central Europe, both sides of the Atlantic can be better prepared to shape the next century and ensure the safety and prosperity of their societies.