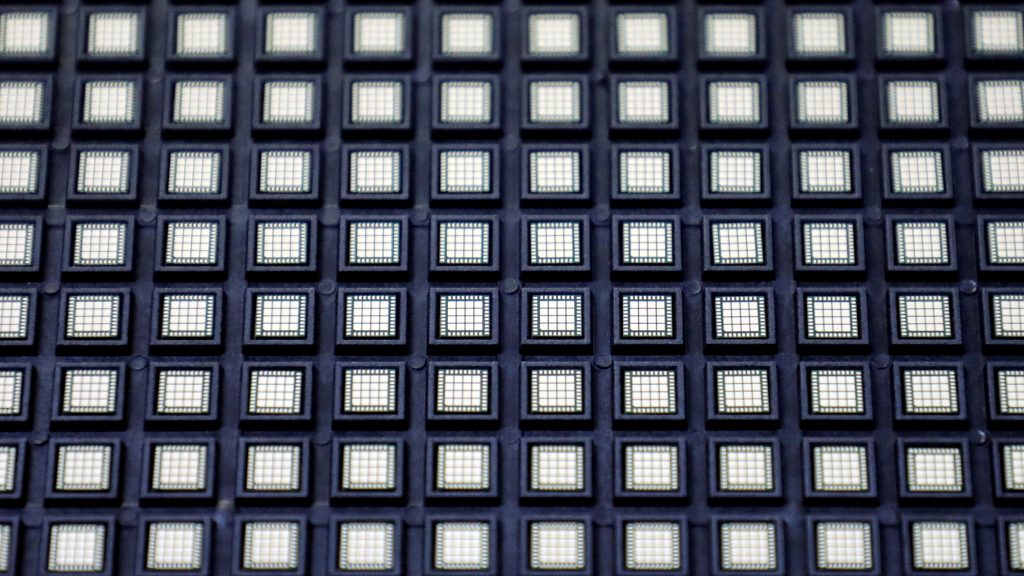 Supply-chain disruptions and shortages—for personal protective equipment, ventilators, toilet paper, and other goods—have arisen and receded throughout the pandemic. But the current semiconductor shortage, now expected to persist well into 2022, stands out both for its longevity and consequences. The political and economic impact of the chip shortage has been magnified by the auto sector, where the inability to source chips costing a mere few hundred dollars halts the production of vehicles worth tens of thousands of dollars.

This shortage is expected to have cut global auto sales by more than two hundred billion dollars in 2021.

The irony here is that despite its linkage to supply-chain policy, the global semiconductor industry is now running at full capacity. And since new chip-fabrication plants take years to bring into operation, there is nothing that governments can do to boost the current supply. Instead, the Biden administration is drifting toward allocating the chips that are currently available—a zero-sum effort that can only increase disputes and distrust among the United States and its partners and allies, and between governments and the private sector.

Instead, the administration’s supply-chain policy must return to its original focus on the critical areas where it’s both needed and can be effective: ensuring that supply chains are secure against compromise and resilient to disruptions from natural events or the policies of foreign governments. Central to this effort is identifying vulnerabilities along the entire length of supply chains, and not just in firms’ immediate suppliers. Working cooperatively with its allies and partners, the United States can enhance supply-chain resiliency and security, as well as help create the transparency needed to identify bottlenecks and chokepoints that cause supply chains to break down.

Responding to shortages is not enough

One of the first actions of the Biden administration was a February 2021 Executive Order on Supply Chains, which declared that the United States needs resilient, diverse, and secure supply chains to ensure economic prosperity and national security. Cooperation with allies and partners on supply-chain resilience became a cornerstone of the administration’s international economic policy, and supply-chain security was a key topic at the Quad Leaders’ Summit in September and at the Group of Twenty (G20) summit a month later. On the margins of the latter, US President Joe Biden held the Summit on Global Supply Chain Resilience with the European Union and fourteen other countries.

This effort was problematic from the start. Semiconductor production is highly capital-intensive, and it takes years (and tens of billions of dollars) to build a new fabrication plant. As a result, the industry has always been subject to swings between excess capacity and tight supplies. With skyrocketing demand from record economic growth, semiconductor shortages would have been inevitable, even with perfectly operating supply chains.

Without the ability to call forth additional production, the administration has instead shifted to jawboning suppliers. It has said at several points that it wants to ensure the “fair” allocation of semiconductors, and the US Commerce Department sent a Request for Information to both US and foreign chip producers asking them to identify their major customers and their shares of total orders, changes in inventory levels, and the methods by which firms allocate available semiconductor supply. Secretary of Commerce Gina Raimondo hinted at possible intervention, opening a September meeting on the semiconductor shortage by saying, “I don’t know who is over-ordering or who is not supplying at levels expected.”

The data requested by Commerce are among the most sensitive that companies have and are jealously guarded from competitors. Even with the government’s promise of confidentiality, they have pushed back against the information request, some declaring that they would not provide customer information. In the end, all major chip producers apparently responded to the request, at least in part. But it’s not clear what Commerce and the Biden administration can do with the data since it can’t be disclosed without breaching the administration’s promise of confidentiality and destroying willingness to cooperate in future data requests. The Defense Production Act could be used to dislodge and reallocate chip supplies, but that would be an extraordinary interference in business decisions.

The semiconductor shortage will resolve over time as producers reallocate production, purchasers modify their designs, chip inventories attain more normal levels, and 2021’s extraordinary growth in demand subsides. But the challenges posed by extensive, complex, and cross-national supply chains will remain—and while private firms have strong incentives to manage and reduce risks in their own supply chains, their individual actions are not enough. Building supply chains that are resilient to disruption and secure against threats requires government leadership and international cooperation.

Private firms create and manage production chains. The challenge for policymakers is to strengthen incentives for firms and overcome coordination problems to create supply chains that are resilient and secure. Policymakers, in government contracts, can encourage or require supply-chain mapping—identifying choke points and other vulnerabilities—stress-testing, and the development of response plans for disruptions. They can also encourage cooperative efforts to develop and spread supply-chain resiliency and security standards. Supply chains are global, and therefore international cooperation across jurisdictions is necessary to create and incentivize the implementation of mutually recognized resiliency and security standards and practices. While this should be a common effort across all US allies and partners, cooperation with South Korea and Taiwan is particularly important, since these two provide 39 percent of global chip fabrication and almost all of the most advanced chips.

Firms have a good sense of their own purchases and the extent to which they would be affected by a shutdown of one of their direct suppliers. But what they don’t have is the ability to gauge vulnerabilities arising from their suppliers’ suppliers, or from suppliers even farther back along the supply chain. Having multiple suppliers may be inadequate protection if each of those suppliers relies on a single firm for the same critical input. You can’t manage what you can’t measure, and the black box of second-, third-, and further-tier suppliers has so far bedeviled firm efforts to build resilient supply chains on their own. The challenge is to incorporate the data private firms have about their supply chains without releasing proprietary information.

The United States and its partners can convene firms and require standards and best practices—developed either by the private sector or by the government—and then encourage their adoption, including by requiring them in government contracts. They should also consider novel means to achieve the goal of supply-chain transparency and resilience standards. A promising alternative is to enlist corporate auditors, who already have access to a wide range of propriety company information, to certify that firms meet resiliency standards in their first-tier suppliers that have themselves been audited to have achieved those same resiliency standards in their own first-tier suppliers.

Requiring standards to extend, at each stage, one further step back is one way to extend resiliency standards along the entire length of supply chains. But above all, success requires incorporating the data that the entirety of firms have to identify choke points and vulnerabilities going much further back along supply chains than firms, acting alone, have been able to achieve.

This article is part of an Asia Security Initiative project on global supply chains, as part of a partnership with the Korea Institute for the Advancement of Technology.

Robert Dohner is a nonresident senior fellow at the Asia Security Initiative of the Atlantic Council’s Scowcroft Center for Strategy and Security and a former deputy assistant secretary for Asia at the US Treasury. 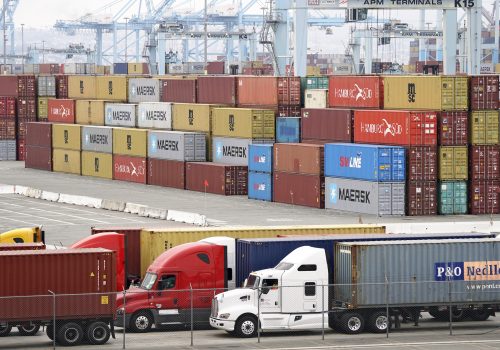 By the numbers: The global economy in 2021

As the year comes to a close, our GeoEconomics Center experts explore the numbers behind the headlines that best capture the shape of the global economy in 2021—and what lies in store for 2022. 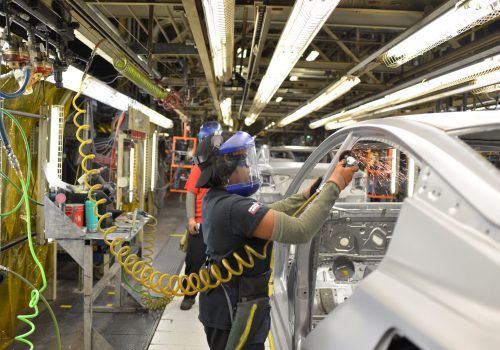 The White House’s case for crafting a new industrial strategy

In a speech at the Atlantic Council, National Economic Council Director Brian Deese laid out why stronger government planning and investment will support Biden administration domestic and foreign policy. 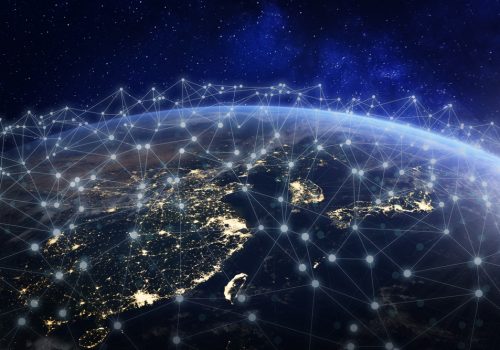 Mounting US-China tensions and the COVID-19 pandemic have led to growing calls in the United States and among its allies and partners, including Japan, to address the vulnerabilities in global supply chains critical to national security and economic competitiveness.