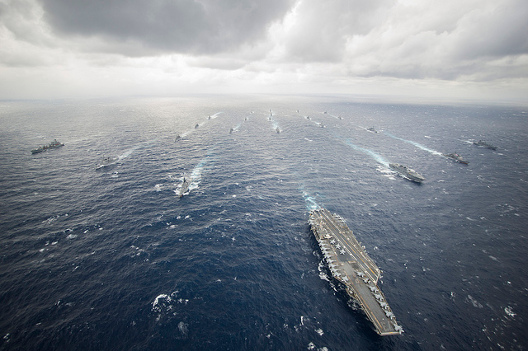 At a moment when few give the Obama administration much credit for either competence or strategy, a cascade of events in East Asia in recent days, not least John Kerry’s trip to Southeast Asia, point to important gains for the stabilizing and offshore-balancing role of US policy toward the Asia-Pacific.

The driving force behind all these developments is none other than China, specifically its assertive, irredentist behavior in regard to disputed island territories in the East and South China Seas.  China’s recent imposition of an Air Defense Identification Zone (ADIZ) that extended into territory in the East China Sea claimed by Japan, South Korea and Taiwan has already generated a swift and angry response, with the US flying B-52s over it, Seoul expanding its own ADIZ, and Tokyo boosting its air presence.

Beijing’s impertinent behavior is proving more effective than anything the State Department could ever dream at mobilizing an Asia-Pacific coalition centered on the United States. Concerns that Beijing will, for an encore, impose a similar ADIZ over disputed territories in the South China Sea are a factor animating current efforts by the United States and its allies and security partners in Southeast Asia to bolster their respective maritime capabilities. During his visit to the Philippines, Secretary Kerry reemphasized that the United States opposed the Chinese ADIZ and urged China to “refrain from taking similar unilateral actions elsewhere in the region, and particularly over the South China Sea.”

Kerry pledged $40 million in maritime military aid to the Philippines, a treaty ally, to enhance Manila’s maritime defense capabilities. In addition, America is negotiating the establishment of a rotating military presence in the Philippines. Until 1992, the US had forward-deployed forces at Clark Air Base and Subic Bay in the Philippines.

The Philippines military aid followed a US announcement of $32 million in maritime aid to help Southeast Asian nations increase their coastal patrol and surveillance capabilities, with $18 million going to Vietnam to buy fast patrol boats for its coast guard. Taken together, these efforts amount to an upgrade in ASEAN countries’ maritime surveillance and monitoring capability in the South China Sea.

These moves in Southeast Asia came as China publicly revealed that the USS Cowpens, a guided missile cruiser, nearly collided with a Chinese ship in the South China Sea that was accompanying China’s first aircraft carrier on a training mission there. The incident is yet another example of the growing risk of accidental clashes in increasingly crowded waters.

The Japan Factor
At the same time, the Japanese cabinet approved a new national-security strategy and five-year defense plan that marks a turning point in Japan’s post-WWII regional role. It will move Tokyo toward becoming a more normal nation in pursuit of what the strategy calls a “proactive contribution to peace.” It most likely will also involve a controversial reinterpretation of Japan’s constitution to allow Tokyo to actively participate in collective defense.

In the defense realm, the plan includes a 5 percent increase in defense spending from 2014-19, which will qualitatively improve its sea and air capabilities designed to create a “dynamic joint defense force.” Japan’s new defense guidelines are designed to deepen security cooperation with the United States as well as enable Japan to play a larger role within the US-Japanese alliance. Japan plans to add seven destroyers (two Aegis guided missile destroyers with missile defense capabilities) to its Navy, which will bring its total destroyer fleet to fifty-four. It will also increase its submarine fleet to twenty-two, adding six new vessels and acquire new amphibious landing vehicles. Moreover, Japan will acquire twenty-eight stealthy F-35 fighters and several surveillance drones.

The new defense guidelines reflect a shift in Japanese strategy, clearly aimed at enhancing its capabilities to better protect the Senkaku Islands in the East China and more broadly, to put more emphasis on its security perimeter to its southern islands. China, which also claims the islands, has been increasing its military and paramilitary sea and air activity around the Senkakus, seeking to make it impossible for Japan to administer the uninhabited (except for 150 goats) rocks.

The ink was barely dry on Japan’s new defense guidelines before China launched its predictable response. The Chinese news agency Xinhua, which usually reflects official positions, called Japan’s new security plans, “a turning point in Tokyo’s understanding of security and signal that the dangerous ‘Abe-military’ has come on stage.” The rest of the Chinese media went further, invoking the ghost of Japanese militarism from the 1930s.

To be fair, Japan’s baffling difficulty in facing up to its reprehensible past, and the remarkable tendency of Japanese officials to with unfortunate regularity rewrite history remains a source of concern among many in Asia and in the United States as well. That said, for the third-largest economy in the world to seek the role of a normal nation, is on balance, a welcome event. And for all the Chinese handwringing, even with the modest increases in Japanese defense spending, Tokyo’s defense budget is $59 billion, and principally defensively configured, while China’s is over $115 billion officially, other experts place it over $166 billion.

Hedging Strategy
Taken together all this stream of events all over a fortnight, underscores the growing security dilemmas of East Asia. For more than two decades, the security dynamic in the Asia-Pacific region has been one of hedging against uncertainty. One the one hand, uncertainty about China’s intentions and long-term role; on the other, concern about the durability of the US security presence which, together with its network of alliances and security partners has been a critical stabilizing force in the region.

Why Beijing thinks its assertive efforts at creating new facts that alter the status quo serve its long-term interests is an intriguing question. It is clearly the opposite of just about everything the ancient sage strategist Sun Tzu advised. For the moment, however, China has galvanized the entire Indo-Pacific region to rise in opposition and bolster their respective defenses. Indeed, it is doing wonders for the administration’s rebalance in Asia as well as resulting in more capable security partners. Three cheers for China.

Robert A. Manning is a senior fellow of the Brent Scowcroft Center for International Security at the Atlantic Council and its Strategic Foresight Initiative. He served as a senior counselor to the UnderSecretary of State for Global Affairs from 2001 to 2004, as a member of the US Department of State Policy Planning Staff from 2004 to 2008, and on the National Intelligence Council (NICs Strategic Futures Group, 2008-2012.