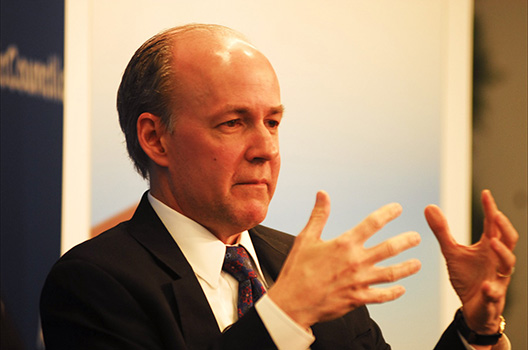 Russia must return to compliance with the Intermediate-Range Nuclear Forces (INF) Treaty or face unspecified consequences from the United States, a top Pentagon official warned June 25 in a keynote address to the Atlantic Council.

Brian P. McKeon, Principal Deputy Secretary for Policy at the Department of Defense, denied a continuing charge by the Kremlin that the Pentagon’s $2.3 billion Aegis Ashore network —the land-based component of its Aegis Ballistic Missile Defense (BMD) system—violates the INF Treaty.

“As you know, last year the United States formally declared the Russian Federation in violation of its obligations under the INF Treaty due to its flight-test of a ground-launched cruise missile capable of flying greater than the INF limit of 500 kilometers—a capability that increases Russia’s ability to strike critical targets in Europe,” he said.

“We have attempted to engage our Russian treaty partners since we discovered the violation, but without success,” McKeon continued. “Instead of addressing or even acknowledging the concerns raised by the United States, Russia has attempted to deflect attention from its violation by claiming that the United States is violating the treaty.”

McKeon, whose speech was part of the Global Missile Defense Conference organized by the Council’s Brent Scowcroft Center on International Security, has been at his current post since July 2014.

Previously, the Notre Dame and Georgetown University graduate was Deputy Assistant to the President and Executive Secretary of the National Security Council; before that, McKeon advised Vice President Joe Biden on all national and homeland security matters.

“The foundation for our current missile defense policy remains as it was articulated in the 2010 Ballistic Missile Defense Review (BMDR). For homeland defense, it provides that we will defend against a limited intercontinental ballistic missile (ICBM) attack and stay ahead of the North Korean and Iranian long-range missile threats,” McKeon said. “Despite significant changes in the international environment since 2010—including the Arab Spring and Russia’s illegal actions in Ukraine—the core principles of the BMDR have held up pretty well.”

Specifically, he said, Russia argues that the Aegis Ashore system can launch Tomahawk cruise missiles in violation of the 1987 treaty, which eliminated all nuclear-armed, ground-launched ballistic and cruise missiles with ranges of 500 to 5,500 kilometers.

“This contention is false,” he said. “The Aegis Ashore system is only capable of launching missile defense interceptors such as the SM-3, which are not subject to the treaty. While the Aegis weapon system aboard the Aegis destroyers and cruisers can fire cruise missiles, this capability is not included in Aegis Ashore.”

The Pentagon is building three Aegis Ashore sites: a test site in Hawaii, and two more in Redzikowo, Poland and at Deveselu Air Base in Romania. Upon completion, each will consist of a deckhouse-type enclosure containing the command and control center and BMD-enhanced radar, as well as a connected vertical launching system building that contains twenty-four SM-3 missiles.

McKeon added that the Aegis Ashore system “may look a lot like the system on a cruiser, but it lacks essential elements for launching a land-attack missile, including software, fire control hardware, and additional support equipment.”

In fact, he said, this system has never been tested for—nor is it capable of—launching a Tomahawk cruise missile, and therefore complies with the INF Treaty.

“I would add that Russia’s other claims of violations relating to armed UAVs (unarmed aerial vehicles, or drones), or the use of targets for our missile defense systems, are clearly and demonstrably false,” he said in reference to INF, which was the first nuclear arms-control agreement in history to actually reduce nuclear arms rather than establish ceilings that could not be exceeded.

“We continue to urge Russia to return to compliance with the INF Treaty,” McKeon warned. “If it does not, we will take measures to prevent Russia from gaining a significant military advantage from its violation.”

Throughout Europe, he said, missile defense protection “serves as a central feature of US transatlantic policy, supports US defense commitments to NATO, and enhances the alliance’s longstanding efforts for increased interoperability, effectiveness, and burden sharing.”

“To those who may still doubt our commitment, consider these facts,” McKeon said. “Since 2011, working with NATO, we have operated a forward-based radar in Turkey. We have worked closely with our Spanish ally to shift the homeports for four US Aegis BMD destroyers to the naval facility in Rota, Spain. The final destroyer will deploy before the end of this year.”

McKeon added that the Aegis Ashore site in Romania will be operational by year’s end, and that construction of the Polish site would begin next year and end by late 2018.

Beyond hosting that site, he noted, Poland announced in late April that it would buy eight Patriot missile batteries from Virginia-based Raytheon Co. in a deal that could generate at least $2.5 billion in US export content.

“Simply put, our missile defense deployments to Europe are happening,” he said, “and they are being built on a firm foundation of partnership with our NATO allies, who are also making significant contributions to the European missile defense mission.”