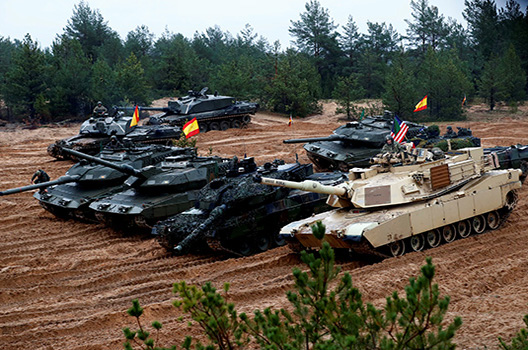 Trident Juncture 2018, one of NATO’s largest  exercises in recent years, got underway on October 25 in and around Norway in the context of a heightened security environment in Europe. With renewed Russian assertiveness on both sides of the Atlantic, including interference in democratic elections, the use of a chemical nerve agent on British soil, targeted cyber-attacks, and violations of Allied airspace only in the past year, tensions are high. Against this backdrop, NATO is taking stock of its collective defense and deterrence posture in Europe.

Military forces from thirty-one countries, including all twenty-nine NATO members, plus Finland and Sweden, are participating in Trident Juncture, a major demonstration and test of NATO’s collective response to a fictional armed attack against an allied member state. The exercises will run through November 7.

Following a year of turbulent interactions between US President  Donald J. Trump and NATO heads of state, exemplified by a rocky NATO Summit in Brussels in July, the exercise is an important visual demonstration of Alliance cohesion.

While there have been strains on the political and diplomatic side of the transatlantic relationship, in part due to the ongoing US criticism of European defense spending, Trident Juncture is a huge sign of military force and unity, with all twenty-nine member states participating.

The exercise indicates that NATO allies are forging on in practical terms to strengthen defense and deterrence, regardless of political friction. This is a trend we’ve seen in other areas, as NATO members are implementing plans for increased defense spending, investing in new capabilities, and making welcome new security commitments. This was underscored at the recent NATO Summit in July, where allies committed to establish the Joint Support and Enabling Command (JSEC) in Germany, counter- hybrid support teams, and a new Cyber Operations Center.

Trident Juncture serves three significant purposes: First, on a practical level it will test NATO’s ability to rapidly respond and mobilize forces, a muscle that must be flexed for the Alliance to effectively defend Europe in a potential crisis.

Second, it highlights the strategic importance of the North Atlantic and maritime security as areas where the Alliance can continue to enhance multidomain strategies for defense.

Third, on a political level, the exercise serves to reassure “frontline” allies bordering Russia, such as the Baltic States and Poland, of US and Allied commitments to act upon Article 5 violations, sending a strong signal of Alliance unity and resolve to deter Russian aggression.

Taking place in and around Norway, including its surrounding airspace and maritime waters, Trident Juncture will simulate an attack on a NATO member. It will test NATO’s ability to rapidly respond and mobilize in a collective defense operation. With around 50,000 personnel, manning 10,000 vehicles, 150 aircraft and sixty-five ships, including a US aircraft carrier, the exercise is not only a strong show of unified force, but a huge test of the Alliance’s ability to move a significant number of troops and equipment into and around Europe.

The scale of Trident Juncture is one of NATO’s most ambitious undertakings in decades, as it serves as the first opportunity for NATO to test out its new “Four Thirties” initiative. The aim of the initiative, agreed upon at July’s NATO Summit in Brussels, is for the Alliance to have thirty combat battalions, thirty naval ships, and thirty air squadrons mobilized for use within thirty days’ notice. In a potential conflict, timing is everything, and while it is important to have trained forces and adequate equipment, it means nothing if they can’t access the theater in a timely manner.

As ADM James G. Foggo, commander of NATO’s Allied Joint Force Command Naples and commander of the exercise stated, Trident Juncture is largely “a logistics exercise,” to test and train what he calls “the sixth domain of warfare.”

The US joint force is good at surging battle-ready troops into an area of operation, enacting Time-Phased Force Deployment, to stagger the distribution of resources, personnel, and activities over an effective time period. This is something NATO is trying to emulate through exercises like Trident Juncture and in implementing the Four Thirties Initiative. “In order to deter, you have to be present,” Foggo said in outlining the specifics of Trident Juncture. “You’ve got to be there and you’ve got to be there quickly.”

Perhaps most significantly, NATO’s spearhead force, otherwise known as the Very High Readiness Joint Task Force, will be put to the test. The 5,000-person-plus VJTF, designed to deploy within forty-eight hours of being notified, will be used in the exercise. This is significant as the VJTF has not been exercised to this extent before, but it would be heavily relied upon as NATO’s follow-on force in a crisis. Such a large and coordinated show of force is hugely important for NATO, to stress test important elements of military mobility and interoperability and demonstrate the Alliance’s ability to plan and conduct a major collective defense operation.

Strategic refocus on maritime threats in the North Atlantic

Although the risk of a potential armed attack on Norway by Russia is relatively low, Trident Juncture’s location denotes the renewed strategic importance of the North Atlantic for NATO. After almost two decades of expeditionary operations in other regions, the North Atlantic, which was a focal point of Cold War concerns over US access into Europe via the Greenland-Iceland-UK Gap (GIUK Gap), is once again in NATO’s spotlight.

In a potential crisis, the United States would need to transit most forces and assets from the continental United States into Europe via the Atlantic Ocean, and therefore any restrictions on maritime access or to sea lines of communication would be devastating. The backbone of Russia’s resurgent navy, the Northern Fleet, is once again active in the North Atlantic. This year the Northern Fleet will receive five new warships, five support vessels, and fifteen aircraft by the end of the year, according to Russian Defense Minister Sergei Shoigu. There are also concerns over the modernization of Russia’s submarine fleet, which can carry advanced land-attack cruise missiles that could allow Russia to strike deep inside Europe, extending its “bastion defense.”

To match these developments, NATO is adapting its command structure and capabilities to look further north and bolster its maritime strategy. The US Navy recently decided to re-establish its Second Fleet to oversee operations in the North Atlantic, and NATO agreed in June to set up a Joint Force Command for the Atlantic in Norfolk, Virginia, to protect open transatlantic lines of communication. Trident Juncture will incorporate core elements of maritime defense and security along Norway’s lengthy western sea border and will be an important test of NATO’s capabilities and coordination in this area, especially in the harsh operating conditions of the High North. Importantly, the exercise will also demonstrate the Alliance’s ability to operate in multiple domains at once: at sea, on land, and in the air.

The timing of NATO’s exercise is important. Trident Juncture comes just weeks after Russia’s largest military exercise since 1981, Vostok-2018, where Russia not only tested its combat preparedness, but demonstrated its diplomatic footing with China, with several thousand Chinese troops joining nearly 300,000 Russian troops in eastern Russia.

The ambition and massive undertaking of Trident Juncture will stress test some of the core competencies of NATO and highlight key areas for the Alliance to continue to work on, such as readiness, military mobility, and the ability to reinforce.

At the same time, the exercise demonstrates Alliance unity and a core commitment to defense and deterrence in Northern Europe at a time when NATO cohesion has been regularly questioned.

Clementine G. Starling is an associate director in the Atlantic Council Scowcroft Center for Strategy and Security’s Transatlantic Security Initiative. Follow her on Twitter @StarlingCG.