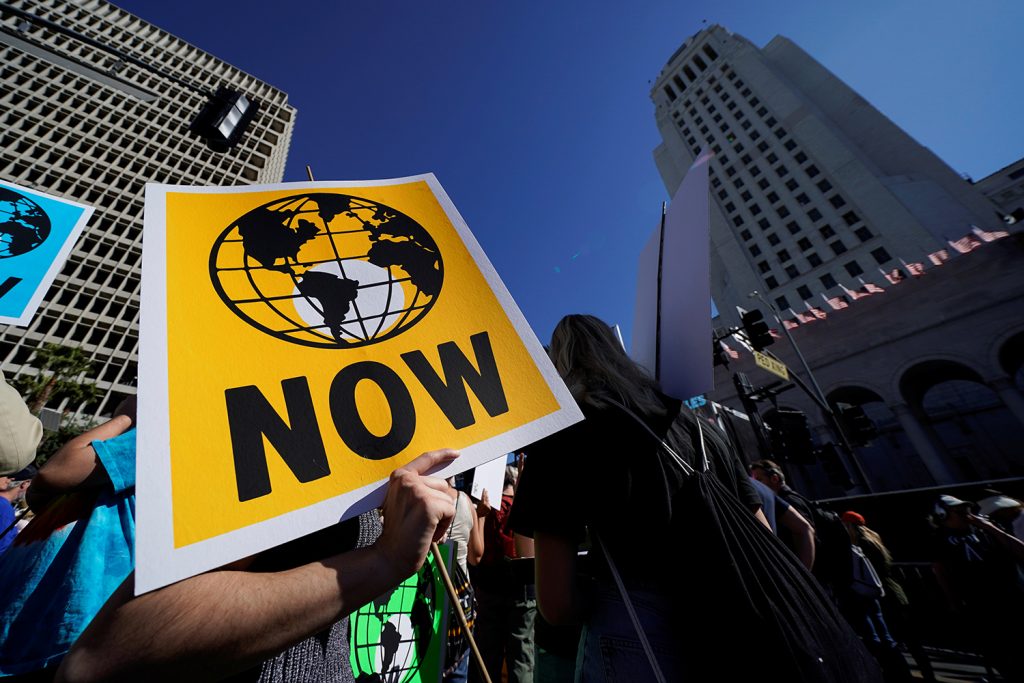 On the third anniversary of the landmark Paris Agreement on climate change, US President Donald J. Trump confirmed his intention to withdraw the United States from the pact, dealing a heavy blow to the agreement’s potential impact. The Paris Agreement, which went into effect on November 4, 2016, set a long-term goal to limit the increase of average global temperature below 2 degrees Celsius as compared to normal “pre-industrial levels,” while mandating that countries actively work to mitigate global warming and limit emissions. The agreement was signed by 187 parties, including the United States, as part of the United Nations Framework Convention on Climate Change.

Trump had announced his intention to withdraw from the deal—which he labelled as “draconian”—in June 2017, over concerns that the agreement would force Washington to implement environmental policies that could hurt the domestic fossil fuels industry. November 4 was the first day the United States was authorized to notify the United Nations general secretary of its intention to withdraw. After the notification, the United States will officially withdraw from the pact on November 4, 2020, just one day after the US presidential election.

Atlantic Council experts respond to President Trump’s notification of the US withdrawal from the Paris agreement:

“The formal notification by the Trump administration that the United States will withdraw from the Paris climate accord should remind us how crucial international cooperation and collaboration is to solving the climate challenge. While President Trump has focused on how the United States somehow got a ‘bad deal’ out of the agreement, his prospective Democratic challengers—who have rightfully raised climate to a top tier issue in the primary campaign—do share some of Trump’s US-centric myopia. Negotiating the Paris agreement was no picnic, and Obama administration officials attest to how difficult it was to get China, India, and other developing countries on board. Without a continued focus on these big emitters, US-focused decarbonization efforts under a new Democratic president would have limited impact on overall global emissions.

“Democrats who are serious about addressing the climate crisis will need plans not only for the United States, but also plans that address developing countries’ competing needs of increasing energy access while simultaneously reducing emissions. This challenge is likely going to require more flexibility than efforts that focus solely on renewables deployment and include carbon capture, nuclear power, and natural gas. It will also require developing financing mechanisms that can encourage sustainable development across the power, industrial, and transportation sectors and compete with other countries willing to offer cheap financing for dirtier alternatives.”

“Attempting to take the United States out of the Paris Agreement exposes Americans—people, property and local economies—to even greater risk of disaster. During the 1980s, on average, there was a federally declared disaster every two weeks. Today, one is are declared every three days. The Paris Agreement is likely our last chance to tackle this climate crisis—the last thing the United States should do to protect its interests is withdraw.”

“While a disappointment, the United States’ notification of intent to withdraw from the Paris Agreement was already largely ‘priced in’ to political discourse and expectations. What matters most now is continued bold leadership—and hard, prosaic work—by the entities that have at least as much control over the future US emissions trajectory as the federal government. These entities include corporations, which are under more pressure than ever to articulate their business model in terms of a net zero carbon economy by mid-century, as well as states, which continue to shape the contours of US energy policy. Many states will continue to lean into the job and wealth creation opportunities of the clean energy economy, including those states that are putting in place the building blocks to create an entirely new, multi-billion-dollar offshore wind sector in the United States. Washington may not be firing on all cylinders at the moment, but this does not mean that we will not see continued US leadership in the energy transition from governors, mayors, CEOs, and citizens.”

“The United States’ withdrawal from the Paris Agreement creates a massive leadership void in addressing one of the urgent global security issues—climate change. This void will be filled by China and the European Union (EU). Nevertheless, there are solutions to address climate change beyond the Paris Agreement. The United States and the EU have a tremendous opportunity to strengthen transatlantic energy security while reducing carbon emissions through cooperation on advanced technologies, such as: methane emission reductions in natural gas production, carbon capture and storage, advanced small modular reactors, offshore wind, solar, energy efficiency, battery storage, and hydrogen fuel production.

“Energy suppliers with a lower carbon footprint will be more competitive as the incoming European Commission ramps up its efforts to decarbonize and sets its eyes on implementing a carbon border tax. As the Unites States competes for a larger share of the EU’s gas market, greenhouse gas emissions reduction and capture will be key attributes, even if the United States finalizes its withdrawal from the Paris Agreement.”

“There was a time when the word of the United States was its bond. The decision to withdraw from the UN Paris Climate Agreement reneges on its word, defaults on that bond, and risks further bankrupting the United States’ preeminence in the world. But the cause of fighting climate change, while set back in the teeth of this decision by the world’s second largest CO2 emitter, is neither far from lost nor is US credit, as there is time for that decision to be reversed.

This is not the first time the United States has stepped away from a climate protocol and yet it somehow managed to return to the table. Despite statements to the contrary, withdrawal from the Paris Agreement does not become effective until November 4, 2020—the day after the presidential election. A year is a long time and 2020 might bring 20:20 hindsight. Even without a reversal, US cities, states, businesses, and nongovernmental organizations may step into the breach and continue to cut greenhouse gas (GHG) emissions without any federal mandate. The US Energy Information Administration is already forecasting that renewable energy will be the fastest growing source of electricity generation. More initiatives to fight or ignore regulatory roll backs that negatively affect climate change could also move US GHG emissions in the right direction. So there remains hope that the United States, in whole or in part, can still recover its leadership role in the effort to forestall climate change.”

“The president’s notice of his intention to withdraw from the Paris agreement is no surprise, but it does highlight the increasingly binary choice American voters will have in the next election when it comes to climate change. We will either live in a world where the United States leads on delivering the energy transition, by combining policies that incentivize emissions reductions with investments in advanced technologies that can produce negative emissions, or continue on the path we are on today, where some states and localities work to reduce emissions while the federal government disassembles the policies and practices designed to get US emissions on a clear downward trajectory and protect our air and water.

“Today, in the absence of robust US leadership on the global climate effort, and with no US emissions reduction target or coherent national policy, the energy transition (here and overseas) is stalling. US emissions are rising again. Countries are behind on their commitments to the treaty—which, even with full compliance, may not deliver sufficient emissions reductions in time. We are not investing in the advanced technologies, or even low-hanging fruit like energy efficiency, which are the only credible pathways to reducing the cost of the energy transition to politically acceptable levels both here and abroad.

“The decision whether to stay in the Paris Agreement or not is really only a symbol of US commitment to the larger challenge—what the United States is willing to do to reduce emissions at home and abroad. Voters will have to choose which path they support. But having the United States simply re-join the Paris Agreement not produce significant change. What is required is a scalable, politically sensible, and technologically credible program to help the world achieve energy security, economic development, and net zero emissions.”

“It was expected that President Trump would move to withdraw from the Paris Agreement at his first opportunity. It was unexpected that global climate change would be happening at such a rapid pace; with more extreme weather events and more ice melt in recent years than scientists previously anticipated.

“Now it remains to be seen if efforts led by other countries and sub-national actors can make up for the US withdrawal, or if US climate policy will change course in the years to come.”

“The president’s misgivings about the Paris Accord and his intention to withdraw have both been well known since his 2016 campaign. CRES advocated early in the president’s term to stay in and negotiate—but a campaign promise is a campaign promise and he’s following through on that. At the end of the day there’s no substitute for US leadership on the international stage when it comes to climate change or any other issue. But actions speak louder than words. So, we will keep advocating for results-driven policies that will assure that the US remains number one in the world when it comes to greenhouse gas reductions.”

What united all of the candidates was a recognition that climate change would need to be a major focus of the next president.

Taking on the temperature

Paris is certainly a leader in the effort to confront climate change and has pledged to be carbon neutral by 2050; it recently released a comprehensive “urban cooling strategy” to prepare for the extreme heat that has cost lives and livelihoods in the recent past.

Image: A person holds a placard during a march and rally at the Youth Climate Strike in Los Angeles, California, U.S., November 1, 2019. REUTERS/Mike Blake