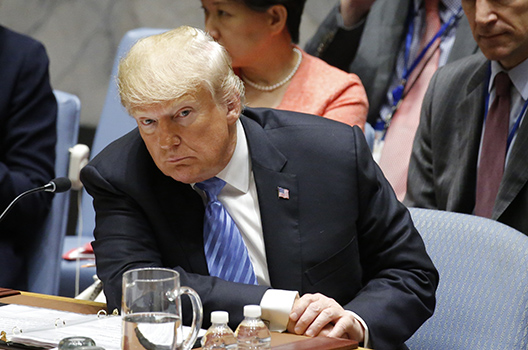 US President Donald J. Trump accused China of attempting to interfere in the US midterm elections in November at a meeting of the United Nations Security Council (UNSC) in New York on September 26.

China does “not want me or [the Republicans] to win,” he said. His remarks came as he chaired the UNSC meeting on nonproliferation of weapons of mass destruction. This is the first UNSC session chaired by Trump and only the third time a US president has led a session.

Trump offered no specific evidence of China’s purported “meddling” during his speech, but tied it directly to the trade issue, saying Beijing wants him to lose “because I am the first president ever to challenge China on trade and we are winning on trade.”

This is not the first time Trump or his administration officials have warned of Chinese actions impacting the November elections. It appears the major concern is that China has designed its retaliatory tariffs—enacted in response to US tariffs on Chinese imports—to impact soybean farmers and industrial workers in states that voted for Trump and his Republican allies in 2016.

On September 18, Trump tweeted that “China has openly stated that they are actively trying to impact and change our election by attacking our farmers, ranchers, and industrial workers because of their loyalty to me.” In late July, a Chinese news account demonstrated the impact Chinese counter-tariffs would have on US soybean farmers in states Trump won or came close in 2016, including Ohio, Iowa, and Minnesota.

“It is true that the Chinese counter-tariffs are targeted and could be aimed at eroding the support in Trump’s base for the administration’s trade policy,” Bart Oosterveld, director of the Atlantic Council’s Global Business and Economics Program said. But, Oosterveld qualified, this is not any different than how the European Union or Canada have acted when placing their counter-tariffs on the United States.

The EU famously slapped tariffs on bourbon and blue jeans earlier this summer in a thinly veiled attempt to hit at Trump’s rural base, Oosterveld said.

Robert Manning, a resident senior fellow at the Atlantic Council’s Scowcroft Center for Strategy and Security, described Trump’s allegation as “preposterous nonsense.” He explained that previously, “Trump boasted that China would not retaliate against his tariffs.” The fact that the tariffs have “boomeranged and hurt farmers who supported him” is a direct result of Trump’s decision to launch a trade war with China, not a conscious decision by Beijing to undermine the US election, Manning argued.

So far, these counter-tariffs have had a “limited impact since the economy is booming, the stock market is at all-time highs, and unemployment is low,” Oosterveld said. But the longer the tariffs are in effect, and any potential increases, could have significant impact on US farmers and workers in export industries.

Marie Kasperek, associate director at the Global Business and Economics Program, noted that the administration did issue a relief package for soybean farmers specifically, but this effort is “not a long-term solution that for many farmers affected won’t cover the losses they incur. The funds are a mere band-aid for a gaping wound that will never recover if not treated immediately.”

Previously in August, Trump had attempted to deflect concerns about Russian meddling in the 2016 presidential election by tweeting that people “should start also looking in another direction, China.” Asked to clarify that remark, US National Security Advisor John Bolton said the Trump administration believed potential meddling from Russia, China, Iran, and North Korea were “a sufficient national security concern.”

The US Congress, too, has turned its attention recently to growing Chinese influence, although it has not gone so far as to identify overt Chinese meddling in the upcoming election. Chinese influence operations within Washington and in US academia have come under closer scrutiny in recent months and have inspired two new bills in the US House and US Senate to authorize a more comprehensive government review of Beijing’s reach in the United States.