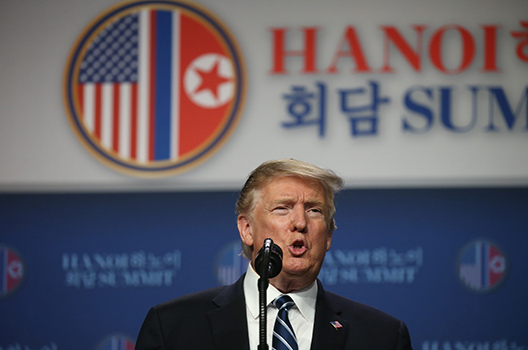 To those who have been paying attention to North Korea for years, the collapse of the second summit between US President Donald J. Trump and North Korean leader Kim Jong-un in Hanoi, Vietnam, comes as no surprise.

“This outcome is disappointing, but not surprising,” said Matthew Kroenig, deputy director for strategy in the Atlantic Council’s Scowcroft Center for Strategy and Security.

Jamie Metzl, a nonresident senior fellow in the Scowcroft Center, said: “It’s no surprise that Donald Trump’s Hanoi Hail Mary—a summit held with no advance agreement, where it was clear the North Koreans had no intention whatsoever of acceding to America’s core demand—was going to end in failure.”

Todd Rosenblum, a nonresident senior fellow in the Scowcroft Center, said Trump “made the best of his self-inflicted rush to summitry by walking away from the negotiating table with Kim Jong-un.”

“He is to be applauded for doing so,” he added.

“Perhaps the president is learning that this is hard business and that adversary states do not treat their national security as glibly as he,” said Rosenblum.

The summit in Hanoi—the second between Trump and Kim—ended abruptly when the North Koreans insisted on the lifting of all sanctions in exchange for dismantling their most important nuclear facility—the Yongbyon enrichment facility.

“North Korea wanted to have its cake and eat it too: nuclear weapons and sanctions relief,” said Kroenig.

“North Korea offered only to dismantle a single reactor in exchange for a complete lifting of sanctions and President Trump was right to walk away from this bad deal,” he added.

At a press conference in Hanoi after the talks on February 28, Trump said: “It was about the sanctions. Basically, they wanted the sanctions lifted in their entirety, and we couldn’t do that.”

“Sometimes you have to walk,” the president added.

Robert A. Manning, a senior fellow in the Scowcroft Center, gave credit to Trump for walking away rather than accepting a bad deal.

“Kim had to know lifting all sanctions was a non-starter for only a serious but modest first step of dismantling all the facilities at Yongbyon,” said Manning. “Kim overplayed his hand.”

Senior US officials, including US Secretary of State Mike Pompeo and the US Special Representative for North Korea Steve Biegun, had meetings with the North Koreans to lay the ground for the Trump-Kim summit.

“The breakdown [in Hanoi] suggests that North Korea did not seriously negotiate beforehand with Steve Biegun to set the stage for the summit,” said Manning. “It suggests Kim thought he could play Trump and did not want to yield anything beforehand at lower-level talks. There should have been understandings reached on minimal trade-offs,” he added.

Manning said he got the impression that the two sides “had agreed on other goodies: an end of war declaration and an exchange of liaison offices, but these were contingent on denuclearization progress.”

Kroenig said the US goal is complete denuclearization. “We have been clear that the sanctions will remain in place until that objective is achieved,” he said.

The Hanoi summit was the second such meeting between Trump and Kim. The two leaders last met in Singapore on June 12, 2018. The historic meeting—the first between a sitting US president and the leader of North Korea—produced a vague communiqué.

While Kim has expressed support for denuclearization and North Korea has, over the past year, not test-fired a nuclear-capable missile or conducted a nuclear test, US intelligence officials have seen no evidence that he will eliminate his nuclear weapons.

Director of National Intelligence Dan Coats testified as much to the Senate intelligence committee on January 29. “We currently assess that North Korea will seek to retain its WMD (weapons of mass destruction) capabilities and is unlikely to completely give up its nuclear weapons and production capability because its leaders ultimately view nuclear weapons as critical to regime survival,” he said.

Coats, in A Worldwide Threat Assessment of the US Intelligence Community, concluded: “North Korean leaders view nuclear arms as critical to regime survival.”

Despite the setback in Hanoi, Kroenig was confident that diplomatic efforts will continue. “I suspect that diplomacy will not end at this point, but both sides will regroup in their respective capitals and figure out their negotiating positions for a future third round of diplomacy,” he said.

At the press conference with Trump in Hanoi, Pompeo said: “We didn’t get to something that ultimately made sense for the United States of America.  I think Chairman Kim was hopeful that we would.  We asked him to do more.  He was unprepared to do that.”

Nevertheless, Pompeo said he was still optimistic. “I’m hopeful that the teams will get back together in the days and weeks ahead, and continue to work out what’s a very complex problem,” he said.

“The way forward will be interesting,” said Rosenblum. “The president signaled a willingness to make denuclearization an end-state goal, not a near-term requirement for improved relations.  Sequential and coordinated confidence building measures by us, North Korea, South Korea and China is the most viable path for institutionalizing a hard freeze.”

“It is unknown if the president accepts that there will not be a big bang agreement whereby the North dramatically gives up the heart of its missile and fissile material programs in exchange for corresponding sanctions relief,” said Rosenblum. “Few believe the North is prepared to accept full nuclear disarmament in any circumstance.”

Further, Rosenblum contended: “There is no genius in acceding to North Korea long-standing desire for a summit with a US president and getting nothing for it in return.”

“The North has pledged many times before to do far more than what it says it will do in both Kim-Trump summits,” he said, adding, “Rushing to give away one of our most important cards without reward hurts.  It undermines our negotiators since they must now manage the North Korean expectation that modest pledges will get them another summit, and cheapens the role of deliberative dialogue.  Both the Singapore and Vietnam summits reflects poor, impulsive thinking by the president, and certainly not the skill of a master negotiator.”

Metzl said: “It appears ever more likely that Donald Trump’s primary motivation in these negotiations has been to secure headlines rather than address the core problems.”

“We can only hope that the Trump administration will redouble efforts to strengthen America’s alliances with Japan and South Korea and approach the North Korea challenge with our collective strategic interests as the foundation of a coordinated approach going forward,” he added.

Manning, meanwhile, said Trump “learned the hard way that diplomacy is not like a real estate deal or reality TV.”

Trump overestimated his leverage, said Manning. “Kim was very confident, not desperate. In fact, Trump needed a win more than Kim,” he said. “For Kim, the TV footage of him lavished with praise by the president of the United States was something of a win in itself.”