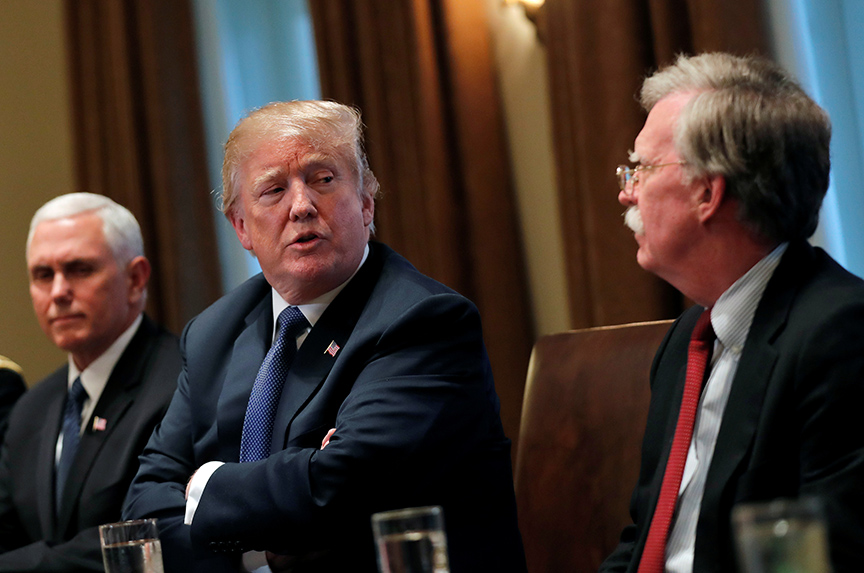 US President Donald J. Trump’s decision not to attend the Summit of the Americas in Peru this week sends the “wrong message” to many of the United States’ friends in Latin America, according to Jason Marczak, director of the Atlantic Council’s Adrienne Arsht Latin America Center.

Trump will skip the summit, scheduled for April 13 and 14, as well as a trip to Colombia in order to “oversee the American response to Syria and to monitor developments around the world,” White House spokesperson Sarah Huckabee Sanders said in a statement on April 10.

Trump said a day earlier that he would decide within the next “24 to 48 hours” how to respond to an alleged chemical weapons attack in the Damascus suburb of Douma. “Nothing is off the table,” the president said, referring to his options.

This would have been Trump’s first visit to Latin America as president. It would have come at a time when the president has roiled the region with a spat with Mexico that has prompted the Mexican government to review its relationship with the United States, threatened repeatedly to pull the United States out of the North American Free Trade Agreement (NAFTA) with Canada and Mexico, and warned of “caravans” of Central American migrants heading north to the United States.

US Vice President Mike Pence will stand in for Trump at the Summit of the Americas.

“This was to be [Trump’s] opportunity to personally meet with leaders and alleviate some of their concern on the trajectory of US commercial policy,” said Marczak.

“With the Venezuela crisis reaching epic levels with regional reverberations Trump will now leave in-person conversations on the response to other heads of state,” he added.

Venezuela, which has the world’s largest oil reserves, has been driven off a cliff by its leader Nicolás Maduro. The country is grappling with hyperinflation and Venezuelans face dire shortages of food and medicine.

The Trump administration has taken a tough line on Venezuela. In February of 2017, it slapped sanctions on Venezuelan Vice President Tareck El Aissami over his alleged involvement in drug trafficking. Three months later it imposed sanctions on eight members of Venezuela’s Supreme Court, which attempted to strip power from the opposition-led National Assembly.

Following a massive turnout by Venezuelans for a symbolic referendum in July of 2017 to oppose Maduro’s plans to rewrite the constitution, Trump called the Venezuelan president a “bad leader who dreams of becoming a dictator.”

“The United States will not stand by as Venezuela crumbles,” Trump said at the time.

In March of 2018, the Trump administration blacklisted four Venezuelan government officials and banned a digital currency created by Maduro as a means to circumventing financial sanctions.

On a visit to Latin America last year, Pence met the presidents of Argentina, Chile, Colombia, and Panama. In those meetings the leaders discussed ways to “increase the pressure against the Maduro regime and negotiate better trade deals that benefit American workers,” said Jarrod Agen, Pence’s spokesman. Pence also met with a number of Venezuelan dissidents at the time.

Agen said the vice president “looks forward to promoting policy that will lead to an even stronger US economy and working with our close allies in Latin America to collectively hold undemocratic actors in the region accountable for their actions.”

Marczak described Pence as “a great representative of the president,” but added: “it’s not the same the same as having Trump there.”

Roberta Braga, an assistant director in the Latin America Center, said that by forgoing his visit to Latin America, Trump “risks sending the message that the US relationship with Latin America is not a priority.”

“This would have been the moment for Trump to show his continued commitment to supporting our allies in the region,” she said. “With the potential for a trilateral meeting with Mexico and Canada, it was also a chance to show continued momentum around a successful NAFTA renegotiation.”

Braga said Pence’s presence in Peru will, nevertheless, “open the door for finding consensus on some of these top issues.”

Image: US President Donald J. Trump attended a briefing from senior military leadership accompanied by Vice President Mike Pence (left) and National Security Advisor John Bolton (right) at the Cabinet Room of the White House in Washington on April 9. The White House said Trump will skip the Summit of the Americas in Peru later this week in order to focus on his administration’s response to an alleged chemical weapons attack in Syria. (Reuters/Carlos Barria)