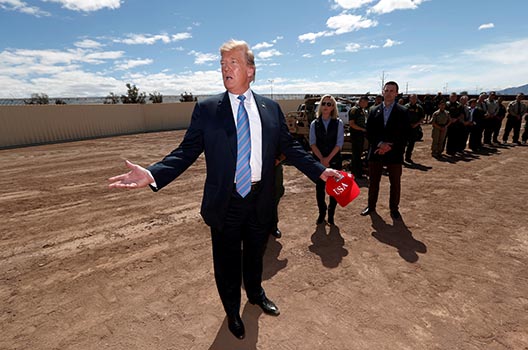 US President Donald J. Trump’s decision to impose tariffs on imports from Mexico until the surge of illegal immigration at the southern border stops will “be a devastating blow to the US economy,” according to Jason Marczak, director of the Atlantic Council’s Adrienne Arsht Latin America Center.

Trump announced on May 30 that his administration would impose a 5 percent tariff on all goods originating in Mexico. He further threatened to increase the tariff unless Mexico took steps to stop migrants from reaching the US border.

While Trump’s aim is to pressure Mexican officials to take more action on illegal immigration, these tariffs “will be most acutely felt by US consumers,” said Marczak.

“Imposing 5 percent and up to 25 percent tariffs on Mexican imports would be a de facto imposition of tariffs on US products. After all, imports from Mexico have 40 percent content that’s made in the United States,” he added.

Justifying the move to punish Mexico, the White House released a statement arguing that “Mexico’s passive cooperation in allowing this mass incursion constitutes an emergency and extraordinary threat to the national security and economy of the United States. Mexico has very strong immigration laws and could easily halt the illegal flow of migrants, including by returning them to their home countries.” The statement furthered explained that tariffs would be increased to 10 percent on July 1 should no action be taken by Mexico, followed by further five percent increases each month until they hit 25 percent.

Marczak said: “It makes no economic sense to impose tariffs on the United States’ second-largest export partner. Any US tariffs—as seen by the steel and aluminum tariffs lifted less than two weeks after nearly a year in place—will be swiftly met by corresponding Mexican tariffs.”

Trump’s announcement comes just two weeks after the United States lifted steel and aluminum tariffs on both Mexico and Canada in order to ease passage of the recently negotiated United States-Mexico-Canada Agreement on trade (USMCA), which still must be ratified in all three countries.

Marczak said: “At a time when the United States is in the midst of a trade war with China, opening up a new front with our southern neighbor—for reasons that are only political in nature—will be most acutely felt by US consumers. This tariff action, if implemented, would be swiftly met by challenges in US courts.”

The new tariff announcement came the same day that US Trade Representative Robert Lighthizer sent a letter to the US Congress to begin the process of USMCA ratification. It also came as Mexican President Andrés Manuel López Obrador sent the USMCA to Mexico’s Senate for ratification.

“The political future of USMCA in Mexico is also now uncertain. Not only will tariffs hurt the relationship with the United States’ southern neighbor, but they will also further weaken Mexico’s contracting economy. Given the level of integration and interdependence between the two economies, any adverse effect on Mexico’s economy will also have important economic effects on the United States,” she added.