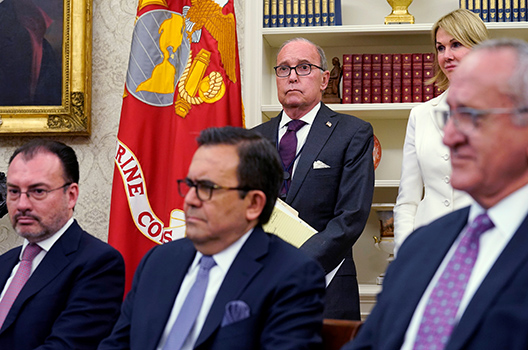 On August 27, US President Donald J. Trump and Mexican President Enrique Peña Nieto announced an initial agreement on a new bilateral trade relationship. The negotiations were initially intended to be a start for wider conversations on the North American Free Trade Agreement (NAFTA), including the third treaty partner, Canada. During the announcement, however, Trump implied that he may choose to negotiate bilaterally with Canada instead of reviving the tripartite agreement.

Trump openly criticized NAFTA during his August 27 call with the Mexican president and declared his desire to rename the new deal “the United States-Mexico Trade Agreement.”

Ambassador Earl Anthony Wayne, a nonresident senior fellow at the Atlantic Council’s Global Business and Economics Program and former US ambassador to Mexico, spoke to the New Atlanticist’s David A. Wemer about the new US-Mexico deal and the implications for the future of NAFTA. Here is an excerpt from the interview:

Q: Presidents Trump and Peña Nieto announced a new deal on August 27 that Trump presented as a “US-Mexico Trade Agreement.” How is this proposed agreement different from NAFTA? What progress has been made on the sticking points on both sides?

Wayne: The US-Mexico “preliminary agreement” significantly changes governing rules of origin and related procedures in the vehicle and parts sector. Effectively, the new rules will mean that more of the content of a vehicle considered as duty free under NAFTA will have to be made in North America (75 percent up from 62.5 percent).  Also 40-45 percent of the content of those vehicles will need to be made by workers being paid at least $16 an hour. These changes should bring about more vehicle and parts production in the United States. They should preserve current Mexican auto production but will shift the model for auto investment in Mexico, especially by non-North American producers, as they will now need to use more North American content in the vehicles they produce in any new plants in Mexico.

There was also progress made in updating other key parts of the agreement, including access for goods, textile production, and agricultural trade. The two sides apparently also agreed on changes in the scope of protection for investors and in some dispute settlement procedures. Also, of importance, Mexico and the United States appear to have agreed on an initial sixteen-year period for the agreement with a review after six years and the possibility of renewing the agreement for an additional sixteen years.

We need to see the reaction and comments from the many stakeholders especially in affected industries. In the auto sector, for example, how much more expensive will vehicles be made under this agreement both for US consumers and for sales abroad where US companies currently export some 22 percent of production? There would be great concern about excluding Canada also, given the intense integration of vehicle production across the northern border. Other businesses will be concerned about changes to their rights as investors given the changes proposed, as another example.

In addition, labor unions and many Democrats will want to look carefully at what is in the new labor chapter, regarding labor rights in Mexico. Energy companies will also want to see what is in the text regarding their sector and their rights, for example.

There is much tough work and negotiating ahead with Canada, with stakeholders, and with Congress and even with Mexico to turn a preliminary agreement in principle into a final agreement. Mexico and Canada, for example, will want US assurances about eliminating US tariffs on their steel and aluminum exports.

Q: What is the future of NAFTA after this agreement? Will Trump really be able to terminate it?

Wayne: I think there is still a good chance that we will get to a renegotiated three-way agreement with Canada joining the United States and Mexico in a new accord, whether it is called NAFTA or given another name. The United States would lose tremendously if it were to try to proceed without its number one export market, Canada.

It is not clear that Congress will ratify an agreement without Canada included, both because they agreed to consider a three-way NAFTA renewal earlier (not a bilateral US-Mexico agreement) and because Canada is the United States’ largest trading partner. Congressional reaction to the U.S.-Mexico agreement has stressed the need to bring Canada into the accord. Leaving Canada aside would be a serious blow to the thirty-six US states that have Canada as their largest trading partner.

The Canadian government will want to review the “preliminary” US-Mexico agreement and argue for its own preferences where they differ, as well as needing to sort through some bilateral issues with the United States. It is not clear how rapidly this process will proceed. United States Trade Representative Robert Lighthizer has indicated the negotiations could extend into the period after the administration has notified Congress.