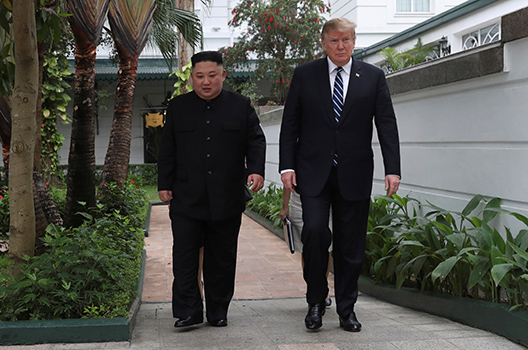 US President Donald J. Trump’s stunning decision to reverse Treasury sanctions on North Korea because he “likes” Kim Jong-un sends a troubling message to the United States’ friends and foes.

“Hard to believe, but the president is undercutting his own policy of maximum pressure/maximum diplomacy, which was arguable sound, in favor, it seems, of an obsequious gesture,” said Daniel Fried, a distinguished senior fellow in the Atlantic Council’s Future Europe Initiative and Eurasia Center who as the State Department’s coordinator for sanctions policy crafted US sanctions against Russia, the largest US sanctions program to date, and negotiated the imposition of similar sanctions by Europe, Canada, Japan, and Australia.

Announcing his decision to reverse the sanctions, Trump tweeted on March 22: “It was announced today by the U.S. Treasury that additional large scale Sanctions would be added to those already existing Sanctions on North Korea. I have today ordered the withdrawal of those additional Sanctions!”

Jamie Metzl, a nonresident senior fellow in the Atlantic Council’s Scowcroft Center for Strategy and Security, said: “By undercutting US sanctions against two Chinese companies flagrantly violating US-backed UN sanctions against North Korea, President Trump is making clear to China, Russia, and even South Korea that the UN sanctions are not to be taken seriously.”

“By making yet another concession to Pyongyang in addition to the massive concessions he has already made in exchange for nothing, Trump is delivering a strong message that North Korea can maintain its nuclear arsenal without additional cost,” he added.

Todd Rosenblum, a nonresident senior fellow in the Scowcroft Center, said: “The president’s reversal of his own administration’s coordinated action the night before underscores chaos and grandiosity in the White House.”

“The president’s action seems to be one of pique and done to preserve the self-aggrandizing illusion that his repeated strategic concessions to the North are working,” he added.

Trump has openly expressed admiration for Kim, going so far as to say the two leaders “fell in love.”

“It is difficult to understand why the president would arbitrarily undo a decision taken by his own Treasury Department. But it does seem to fit a pattern,” said Robert A. Manning, a senior fellow in the Atlantic Council’s Scowcroft Center for Strategy and Security.

But Manning pointed to a pattern. “He did the same sort of thing announcing a suspension of US-ROK military exercises after the first Trump-Kim summit without even telling Defense Secretary Mattis or US Forces in Korea. He let the Chinese firm ZTE off the hook after the Justice Department went after them for a range of violations.  Then he indicated he might drop charges against Meng Wanzhou, the chief financial officer of Huawei,” he said. “The Trump administration is short on real inter-agency policy processes and long on Trump doing things depending on what the last person he talked to said.”

Announcing the sanctions on March 21, Treasury said: “Today’s action highlights the deceptive methods that the North Korean regime uses to circumvent international and US sanctions, as well as the US government’s commitment to implement existing UN Security Council (UNSC) resolutions.”

Treasury Secretary Steven Mnuchin said: “The United States and our like-minded partners remain committed to achieving the final, fully verified denuclearization of North Korea and believe that the full implementation of North Korea-related UN Security Council resolutions is crucial to a successful outcome.”

“Treasury will continue to enforce our sanctions, and we are making it explicitly clear that shipping companies employing deceptive tactics to mask illicit trade with North Korea expose themselves to great risk,” he added.

But that was then.

Metzl said that by “cutting his own Treasury secretary off at the knees, Trump is signaling to his entire Cabinet that policy should follow presidential whim rather than US strategic interests.”

“If that’s not enough, the most significant problem runs even deeper. Trump’s dangerous incompetence and clear lack of fitness for the presidency are empowering America’s adversaries, eroding the trust of America’s friends and allies, and destabilizing the post-war international system,” he said. “We can only hope that Congress will step up to play the functional role of regent until the presidency can be in less dangerous hands.”

Rosenblum said he felt bad for the government officials “who spent many hours in White House-chaired interagency meetings readying the new sanctions package. I am sure they feel whip-sawed and undercut once again.”

“That said, not imposing the new sanctions looks like a goodwill gesture. This shifts blame to North Korea for its recent escalatory actions and away from the United States. It is important that South Koreans blame North Korea, and not the United States, for walking back ties with the South.”

North Korea on March 22 withdrew from an inter-Korean liaison office in the North Korean city of Kaesong. The office was opened last year as ties between the two Koreas warmed.

Trump and Kim have met twice—first in Singapore on June 12, 2018, and then again in Hanoi on February 27 and 28. The Hanoi summit ended abruptly with the North Koreans reportedly insisting on the removal of all sanctions in exchange for dismantling their most important nuclear facility—the Yongbyon enrichment facility.

At a press conference in Hanoi after the talks on February 28, Trump justified his decision, saying: “Sometimes you have to walk.”

North Korea then took the rare step of calling a middle-of-the-night press conference at which Foreign Minister Ri Yong Ho disputed Trump’s account. He said Pyongyang only sought partial sanctions relief in exchange for an offer to dismantle the enrichment and plutonium production facilities at Yongbyon.

A senior US State Department official later clarified that the North Koreans only asked for the lifting of sanctions that impede the civilian economy and people’s livelihood, not those on armaments, which were imposed after North Korea conducted its first nuclear test in 2006.

While Kim has expressed support for denuclearization—a US demand—and North Korea has, over the past year, not test-fired a nuclear-capable missile or conducted a nuclear test, US intelligence officials continue to see no evidence that he will eliminate his nuclear weapons.