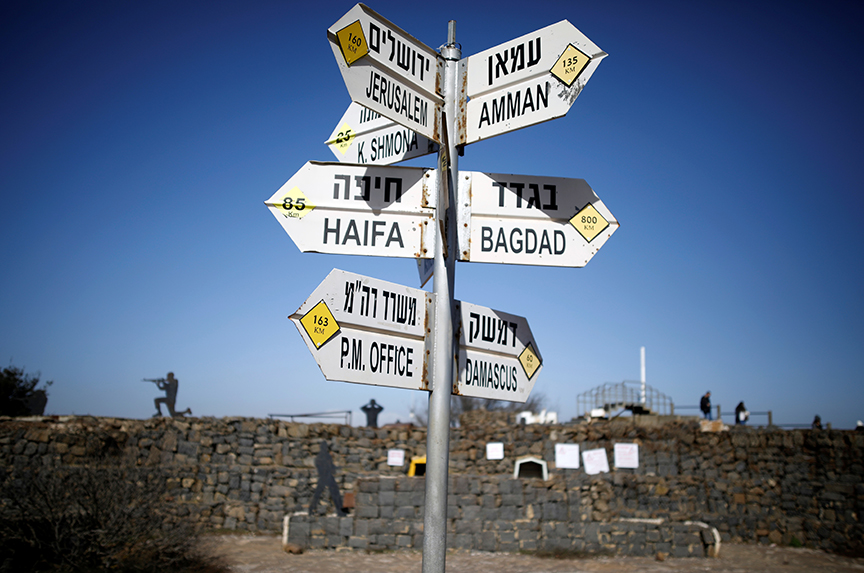 In a departure from longstanding US policy, US President Donald J. Trump on March 21 tweeted that it was time the United States recognized Israel’s sovereignty over the Golan Heights, a strategic plateau Israel captured from Syria in 1967.

While there is perhaps more than a touch of politics behind the timing of the tweet—Israeli Prime Minister Benjamin Netanyahu, who is facing charges of bribery, fraud, and breach of trust, is up for re-election on April 9—an actual shift in US policy on this sensitive issue could have serious consequences.

“Trump’s decision is ill-advised, will make no difference to the actual security situation on the Heights, and is clearly intended to bolster Netanyahu’s prospects in a close election,” said James B. Cunningham, a nonresident senior fellow with the Atlantic Council’s South Asia Center and a former US ambassador to Israel.

Cunningham said the tweet’s “political and diplomatic implications could be quite serious, from sanctioning the seizure of territory by force to providing encouragement to those seeking to support the Assad regime or extremism in the region.”

Richard LeBaron, a nonresident senior fellow with the Atlantic Council’s Rafik Hariri Center for the Middle East who served as deputy chief of mission at the US Embassy in Tel Aviv from 2001 to 2004, said: “The president is once again pandering to the worst impulses of Prime Minister Netanyahu and his supporters in Israel and the United States.”

Trump will host Netanyahu at the White House on March 25 and 26.

William F. Wechsler, senior adviser for Middle East programs at the Atlantic Council and interim director of the Hariri Center, said Trump’s tweet “changes nothing on the ground, but its timing will lend credence to the perception in the region that it is largely driven by domestic politics, both in Israel and in the United States.”

Israel captured the Golan Heights from Syria in the Six Day War in 1967. The two neighbors remain technically in a state of war and UN observers are deployed to monitor the demilitarized zone.

In 1981, Israel’s parliament, the Knesset, passed legislation annexing the Golan Heights. However, the international community, including the United States, did not recognize this act and regards the Golan Heights as occupied territory.

On March 21, Trump tweeted: “After 52 years it is time for the United States to fully recognize Israel’s Sovereignty over the Golan Heights, which is of critical strategic and security importance to the State of Israel and Regional Stability!”

Following the tweet, the European Union said its position of not recognizing Israeli sovereignty over the Golan Heights had not changed.

And Iran’s Foreign Ministry said the “illegal and unacceptable recognition does not change the fact that it belongs to Syria.”

“Even though the term is ‘sovereignty’ not ‘annexation,’ raising this issue so publicly hands a modest and unnecessary diplomatic cudgel to Assad, Iran, Hezbollah and others who seek to delegitimize Israel in the court of global public opinion,” said Wechsler.

“That said, the reality is that there is near-universal consensus in the Israeli security community that control over the Golan will be maintained for many years to come, perhaps many decades. That is one of the legacies of the Syrian civil war,” he added.

Syria reacted to Trump’s tweet by saying it showed “the blind bias of the United States” toward Israel.

Syrian state news agency SANA cited an unidentified foreign ministry source as saying  Trump’s tweet does not change “the reality that the Golan Heights was and will remain Syrian, Arab.”

Frederic C. Hof, Bard College’s diplomat in residence and a distinguished senior fellow with the Hariri Center, said: “American recognition of Israel’s sovereignty over the occupied Golan Heights would discourage brave Syrians trying to replace the Assad regime with decent governance and would end forever US attempts to help bring about Syrian-Israeli peace.”

“It would also kill a key provision of the Saudi-authored Arab Peace Initiative,” he added.

Wechsler said: “If the Assad regime was ever seen as a potential partner for a peace deal over the Golan, it certainly is not any longer. Indeed, most Israelis are thankful that past peace processes over the Golan never succeeded; otherwise the Syrian civil war would have extended to their doorstep.”

“The real strategic value of the Golan Heights has increased materially due to the expansion of Iranian power and infrastructure in Syria. And Gulf governments, which never ranked the Golan highly in their list of issues with Israel, are even more uninterested now given their growing alignment of strategic interests with Israel regarding the threat from Iran,” he explained.

Nabeel Khoury, a nonresident senior fellow at the Hariri Center, said: “The administration’s policy of recognizing Israel’s sovereignty over the Golan makes no political, strategic or moral sense.”

It is not clear whether the White House’s long-awaited Middle East peace plan will include US recognition of Israeli sovereignty over the Golan Heights.

Hof contended that US recognition of Israeli sovereignty over the Golan Heights would be “welcomed by Israel’s bitterest enemies—Iran and Hezbollah—who would see annexation as additional justification for terror operations.”

“It would enable Syria’s Assad regime to change the subject from its war crimes and crimes against humanity to Israel’s formal acquisition of territory in violation of UN Security Council Resolution 242,” Hof said, adding, “It would do nothing whatsoever positive for Israel’s security. It would be an entirely gratuitous gesture with potential diplomatic downsides for Israel and for the security of Israelis.”

LeBaron described the Golan Heights as “occupied territory” and said that “the status of the area should be addressed in the context of negotiations.”

“The notion posited by the current Israeli prime minister that the Golan Heights should become part of Israel because Israel has occupied them since 1967 has no basis in international law, will produce no meaningful benefit for Israel, and in no way furthers any US interest in the Middle East,” he added.

Netanyahu was quick to thank Trump for his support.

“At a time when Iran seeks to use Syria as a platform to destroy Israel, President Trump boldly recognizes Israeli sovereignty over the Golan Heights. Thank you President Trump!” Netanyahu wrote in English on Twitter.

The Trump administration has taken several decisions that are seen as favorable to Israel and have raised questions about the United States’ ability to be an honest broker in the Middle East.

On December 6, 2017, Trump announced his decision to recognize Jerusalem as the capital of Israel and to shift the US Embassy from Tel Aviv to Jerusalem. The decision marked a break with decades of US policy. The embassy opened in Jerusalem six months later.

Earlier in March, the Trump administration shuttered the US Consulate General in Jerusalem, which had served as the de facto US Embassy to the Palestinian Authority.

All these moves represent “a total abdication of any role for the United States in peacemaking between Palestinians and Israelis or between Israelis and the broader Arab world,” Khoury said. “Nothing under international law or political affiliations justifies this move [on the Golan Heights]. US friendship with Israel does not depend on it, nor do any other alliances in the region or with Europe.”

“In the end, one can only question the motives behind such a declaration,” he added.

Image: A signpost is seen on Mount Bental, an observation post in the Israeli-occupied Golan Heights that overlooks the Syrian side of the Quneitra crossing, on January 21. (Reuters/Amir Cohen)