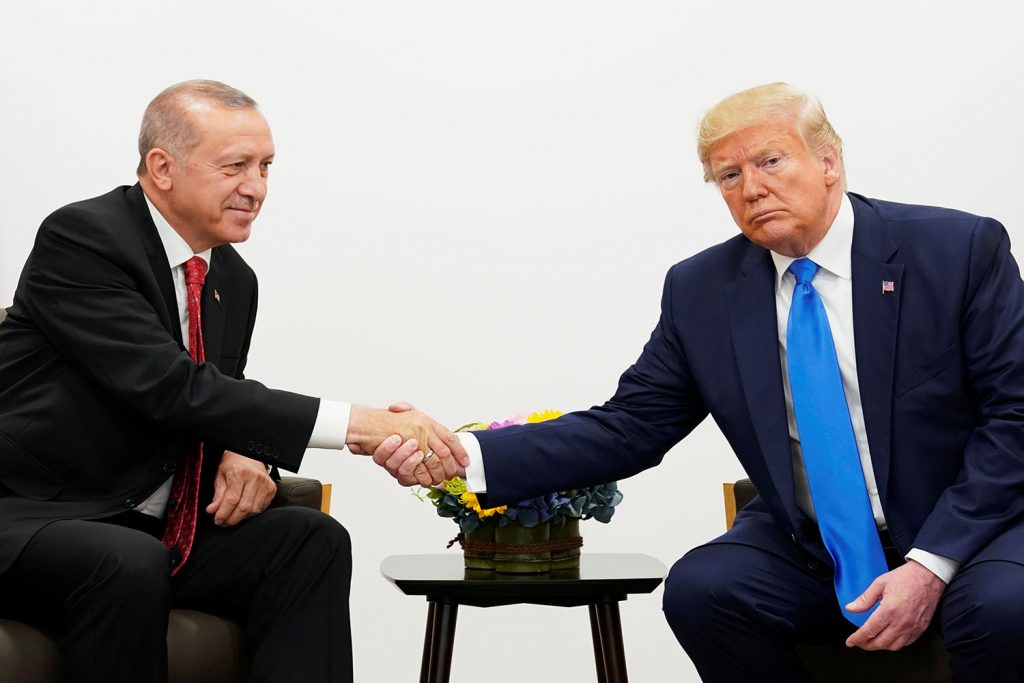 After much speculation and tweeting about crippling Turkey’s economy, US President Donald J. Trump announced on October 14 his administration’s response to Turkey’s invasion of Syria and assault on the United States’ former partners, the Syrian Kurdish splinter group, the People’s Protection Units or YPG. There is nothing crippling about what the president announced—sanctions that target three Turkish military officials, the Turkish defense ministry, and the Turkish energy ministry; suspension of far-off trade discussions; and a steel tariff increase from 25 to 50 percent. President Trump further threatened to “swiftly destroy Turkey’s economy” if the offensive continues, a message echoed by US Treasury Secretary Steven Mnuchin.

The problem with all this bluster is simple: it’s hard to bluff when your cards are already on the table.

To recap. President Trump reportedly went off-script in a phone call with Turkish President Recep Tayyip Erdoğan on October 6 and announced he would withdraw US troops from northeast Syria, giving Turkey the green light to launch an invasion and attack Erdoğan’s longtime adversary, the YPG. Condemnation from both sides of the aisle was swift, with Senator Lindsey Graham (R-SC) immediately promising sanctions on Turkey if Ankara crossed the border. The Trump administration quickly tried to half walk-back the president’s strategic blunder—which was apparently made against the recommendation of his military advisers—by joining the sanctions threat. Turkey, unbowed, crossed the border and continues to escalate offensive operations against the YPG.

The implications are nothing short of earth-shattering. Trump in one short phone call upended the US- and rebel-maintained buffer zone in northern Syria, set NATO against one of its own members, allowed the Turkish military to assault the United States’ once-partners in the fight against Syrian President Bashar al-Assad and ISIS, solidified Assad’s grip on power in Syria, and provided space for ISIS to remerge with a territorial safe-haven in Syria.

The most appropriate and effective way to confront this issue would have been to take coordinated action with European Union and NATO allies, make clear that US security guarantees in the buffer zone still existed and that the fight against ISIS was the only tolerable Turkish military action, and present a unified front to Turkey while pressing Ankara to finalize a comprehensive agreement on restoring bilateral relations that was within reach at the very moment of the now infamous Trump-Erdoğan October 13 phone call. The Trump administration’s way of cleaning up this mess? Sanctions, of course.

But seeking to rely on sanctions to somehow solve all those problems is malpractice, and undermines the tool. Sanctions can be used to change behavior or deter future bad behavior, but like all threats, they must be credible. It is hard to take seriously threats by the US government to ruin the Turkish economy when Trump himself gave this green light in the first place, and continues to equivocate via his Twitter feed; one minute justifying the Turkish assault and thirty minutes later threatening sanctions. Under such circumstances, sanctions have almost no chance of succeeding in putting this genie back in the bottle.

That does not mean that sanctions cannot harm the Turkish economy. Turkey’s economy is heavily reliant on the US dollar and very limited sanctions in 2018 on two Turkish officials over the jailing of a US pastor caused significant economic distress—the lira plummeted and inflation hit 24.5 percent. If the US administration follows through on its threats to increase sanctions if Turkey does not withdraw its troops, broader measures targeting key financial institutions and other major economic actors would have a major impact on an already vulnerable economy. But by the time those sanctions are deployed and have time to take effect, the damage will have long been done. The YPG have already allied with Assad, whom President Trump (rightly) refers to as an US enemy. The Turkish military has already crossed the border and disrupted the area under Kurdish control, allowing a hundreds of ISIS captives to flee. And the Turkish military’s mission, as it were, may be largely accomplished by the time the sanctions bite.

And perhaps most critically, a significant wedge has already been driven in the relationship between NATO and its eastern bulwark, Turkey, a key strategic hedge against Russia. Many NATO allies have frozen military exports to Turkey, and the more Ankara moves away from the alliance, the closer it gets to Russia. The green light followed by the erratic switch to threatening crushing sanctions threatens to turn a difficult period into a permanent split that will substantially undermine US and allied interests.

Looking forward, it is possible that Trump has left his Turkish counterpart a dignified way out. Trump’s demand is not that Turkey withdraw from Syria, but that it implement a ceasefire. This may be a demand that Erdoğan can accept, because it will allow him to declare victory at home and avoid more punishing sanctions.

If that approach is unsuccessful, where we go from here is anyone’s best guess, but here’s a shot. The Trump administration’s sanctions will do little to deter Erdoğan. Spurred on by continued Turkish aggression, the administration, Congress, or both will impose more significant sanctions targeting the Turkish economy in the next two to three weeks. After some short interim period of economic pain to Turkey, Ankara will declare its mission complete and announce it is pulling back its troops in a deal with Washington to lift the tougher sanctions. Somewhere in this scenario—admittedly something of a best case—is an outcome that can salvage some relationship with Ankara that limits the damage to strategic US and NATO interests. There will still be substantial damage to the mission in Syria, US reliability as a partner, and the fight against ISIS, but the goal of the Trump administration, the Congress, and allies in Europe should be on minimizing that damage.

Either way, the use and threat of US sanctions will have failed to achieve even the status quo prior to October 13, let alone a desirable outcome, not because they don’t have impact but because they never had a chance to succeed in the first place. Using sanctions effectively requires consistent and implementable policy goals, which are not present in this situation. Instead, sanctions will serve as a last-gasp attempt to rescue what little good can come out of a massive strategic blunder; a misguided use of an otherwise powerful tool.