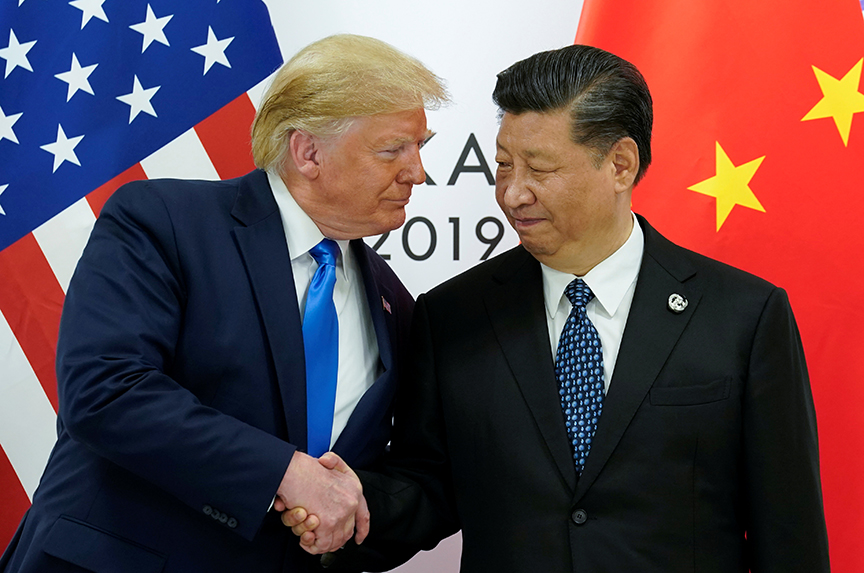 US President Donald J. Trump agreed on June 29 to lift some restrictions on Chinese telecommunications giant Huawei and delay imposing new tariffs on Chinese goods. These concessions were announced following a meeting between Trump and Chinese President Xi Jinping on the sidelines of the G20 summit in Osaka, Japan, at which the two leaders agreed to restart trade negotiations between their countries.

“Frankly, this was all fairly predictable,” said Mark Linscott, a senior fellow with the Atlantic Council’s South Asia Center and a former assistant US trade representative (USTR) for South and Central Asian Affairs.

“The two sides had already made progress before and intensifying the war is in neither side’s interest,” Linscott said, adding, “At this point, it seems a lot easier to impose tariffs than to lift them, so avoiding new ones makes a lot of sense, particularly to allow more space for negotiation.”

Noting that the “move with China is coupled with conciliatory steps [by the United States] towards India and Japan,” Linscott said: “I think the administration has entered into a new phase of negotiation on multiple fronts, while maintaining the threat of tariffs as continuing leverage.”

At a press conference in Osaka, Trump said: “We’re going to work with China on where we left off, to see if we can make a deal.”

Trump said that in exchange for his concessions, China had agreed to buy large amounts of farm products from US companies. However, Chinese officials have not confirmed this commitment.

“The Trump-Xi meeting has produced the expected outcome: renewed negotiation with additional US tariffs held in abeyance,” said Hung Tran, a nonresident senior fellow with the Atlantic Council and a former executive managing director of the Institute of International Finance.

Marie Kasperek, deputy director in the Atlantic Council’s Global Business and Economics Program, said US Commerce Secretary Wilbur Ross “has already indicated that new tariffs are off as long as progress is being made.”

“With no official new deadline or timeline set, it seems like it will be a unilateral call by the United States what progress means and if the pace at which it takes place is sufficient,” she added.

This is not the first time that there has been a pause in the US-China trade war. In December 2018, following a meeting with Xi on the sidelines of the G20 in Argentina, Trump agreed to hold off for ninety days on his promise to increase US tariffs on $200 billion worth of Chinese goods from 10 percent to 25 percent in order to give time for negotiations.

“However, compared to the G20 2018 summit in Buenos Aires, we’re back to square minus one: the United States has raised the tariff rate to 25 percent on $250 billion of Chinese goods and put Huawei and five supercomputer manufacturers on the Entity List; while China has articulated its requirements for a deal—a reasonable demand to purchase goods from the United States, the lifting of US tariffs and the Huawei ban, and meeting halfway and respecting each other’s sovereignty,” said Tran. “These developments represent a hardening of attitudes on both sides and have made reaching a meaningful deal—as opposed to a politically expedient one, which cannot be ruled out—more difficult than before.”

The pause in the trade war between the world’s two largest economies—one that has been marked by tit-for-tat tariffs—follows more than a month of acrimony between the United States and China.

Earlier this year, it was reported that the United States and China were on the brink of a trade deal. However, by May the purported agreement had fallen apart. The United States blamed China for the breakdown saying Beijing had “backpedaled” on its promises and rewritten the draft proposal; China said it was the United States’ fault and that it was “common practice” to make new proposals while negotiations are ongoing.

On Huawei, Trump said: “US companies can sell their equipment to Huawei.” While the extent of Trump’s reversal of restrictions on business with Huawei is still unclear, any softening on this front would be a significant concession to a company the Trump administration has described as a threat to national security. US officials have said the use of Huawei’s 5G technology carries security and privacy risks as it could create a backdoor for the Chinese government to spy on US networks. The Trump administration has gone so far as to put pressure on its allies, notably the United Kingdom, not to do business with Huawei. By buying Huwaei’s technologies, US allies would be putting their intelligence sharing relationships with the United States at risk, Washington has warned.

“President Trump’s announcement of a planned partial reprieve for Huawei came as a surprise,” said Kasperek. “Even though the extent of the concessions for Huawei are still under discussion, his move is a blow to the Commerce Department which blacklisted Huawei out of national security reasons last month.”

Even though the trade war has been paused for now, there are still tariffs on hundreds of billions of dollars’ worth of goods. Negotiators from both sides will need to bridge significant differences. The United States has accused China of stealing intellectual property and forcing US firms to share trade secrets if they want to do business in China. The United States wants China to end subsidies to state-owned companies, open up its domestic market, and hold China accountable if it falters on these commitments. China says the US demands are unreasonable.

Following the last US-China trade war truce in December 2018, when negotiations collapsed in May, Trump slapped tariffs on $200 billion in Chinese goods. It’s anyone’s guess how long this latest ceasefire will hold.

Image: US President Donald J. Trump and Chinese President Xi Jinping shook hands at the start of their bilateral meeting at the G20 leaders’ summit in Osaka, Japan, on June 29. (Reuters/Kevin Lamarque)