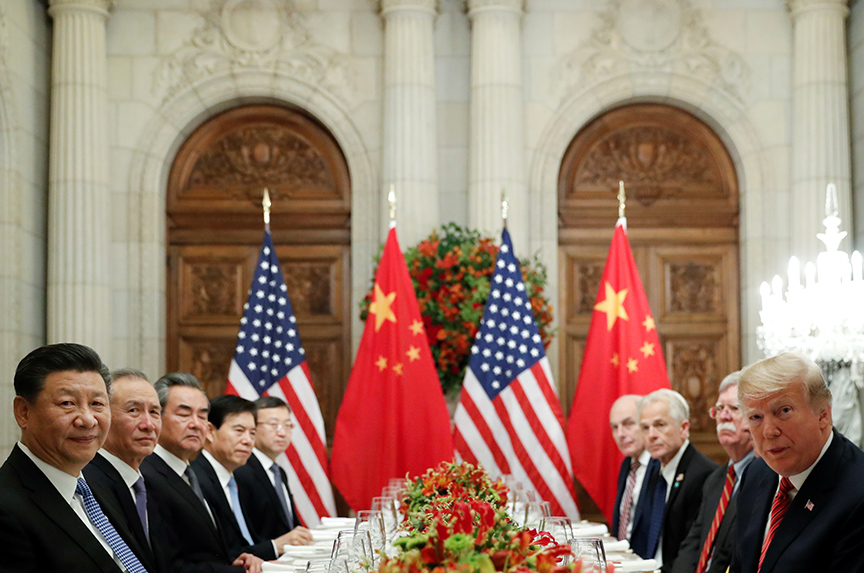 US President Donald J. Trump and Chinese President Xi Jinping on December 1 agreed to a truce in their trade war in order to allow time for negotiations. In what is a significant de-escalation of a conflict that has been marked by tit-for-tat tariffs, Trump and Xi put on hold threatened tariff increases for ninety days.

The agreement was reached during a dinner meeting between the two leaders after the Group of 20 (G20) summit in Buenos Aires, Argentina.

Ahead of the G20, Trump had said he expected to go ahead with plans to increase tariffs on $200 billion of Chinese goods from 10 percent—imposed in September—to 25 percent starting in January 2019. The White House says this has now been suspended for ninety days.

In return, “China will agree to purchase a not yet agreed upon, but very substantial, amount of agricultural, energy, industrial, and other product from the United States to reduce the trade imbalance between our two countries,” the White House said in a statement. “China has agreed to start purchasing agricultural product from our farmers immediately.”

“This is a reflection of the cost of tariffs to both of the world’s two largest economies,” said Robert A. Manning, a senior fellow in the Atlantic Council’s Scowcroft Center for Strategy and Security.

“I think at a minimum, this provides breathing space to begin a process to roll back Chinese mercantilism and move toward a redefined trade relationship based on reciprocity,” he added.

Jamie Metzl, a nonresident senior fellow for technology and national security in the Atlantic Council’s Scowcroft Center for Strategy and Security, said: “The ninety-day truce in the growing trade war will create a short window of opportunity in which some type of longer-lasting agreement could be negotiated.”

“There is no doubt that China’s mercantilist behavior, lack of reciprocity, and unabashed theft of intellectual property pose a significant challenge to the United States that must be addressed. It is less clear whether the Trump administration’s go-it-alone strategy for responding to this Chinese challenge will be enough to turn the tide,” said Metzl.

The White House said both Trump and Xi had described their dinner as a “highly successful meeting.”

The White House quoted Trump as saying: “This was an amazing and productive meeting with unlimited possibilities for both the United States and China.”

“The Chinese recognize that the trade deficit can be alleviated by purchasing more traditional agriculture and energy products, but the ultimate issues at stake will be who controls the commanding height of the 21st-century economy, particularly advanced technologies,” said Metzl.

“China is extremely focused on building its economy of the future and will certainly try to take advantage of President Trump’s obsession with rebuilding the industries of the past,” he added.

Bart Oosterveld, director of the Atlantic Council’s Global Business and Economics program, said: “The ninety-day window gives a brief opportunity for meaningful concessions by the Chinese on trade practices that have long been a concern for the United States and its allies.”

“The ninety days’ reprieve seems to be what we expected as the ‘ideal’ outcome. The question is whether that’s enough time to really agree on what the United States wants from China—structural changes that are intrinsic to their economic policy and their long-term strategy,” said Marie Kasperek, an associate director in the Global Business and Economics program.

“Both parties agree that they will endeavor to have this transaction completed within the next ninety days. If at the end of this period of time, the parties are unable to reach an agreement, the 10 percent tariffs will be raised to 25 percent,” it added.

The United States and China have been caught in a war of tariffs.

On September 18, hours after Trump announced his decision to impose 10 percent tariffs on $200 billion worth of Chinese imports, China struck back. Beijing retaliated immediately, announcing tariffs on an additional $60 billion in US imports. The Chinese tariffs targeted more than 5,000 US goods, including meat, nuts, alcoholic drinks, chemicals, clothes, machinery, furniture, and auto parts—nearly everything that China imports from the United States.