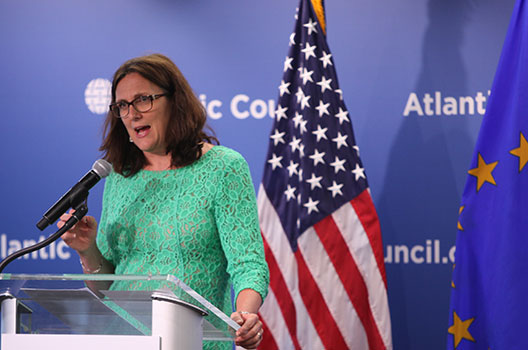 Cecilia Malmström, the European commissioner for trade, delivers remarks on the Transatlantic Trade and Investment Partnership (TTIP) at the Atlantic Council in Washington on June 29. (Atlantic Council/Victoria Langton)

“There are a lot of uncertainties related to Brexit and we will have to wait and see the clearer picture. But for now and for the immediate future, the UK is a member of the EU and we will negotiate [the Transatlantic Trade and Investment Partnership (TTIP)] on behalf of all the twenty-eight members. TTIP will survive Brexit,” Cecilia Malmström, the European commissioner for trade, said at an event hosted by the Atlantic Council’s Global Business and Economics Program in Washington on June 29.

“We have to be patient and wait for the formal triggering of Article 50 and for the UK to define their vision of their relationship with the EU. In the meantime, business has to go on as usual,” she added.

On June 23, Britons voted 52 percent to 48 percent in favor of the UK leaving the European Union. The results of the referendum are not legally binding and formal negotiations to leave the European Union can only begin once the British prime minister notifies the European Council of the UK’s decision to leave. Once negotiations commence, it could take up to two years before the UK actually leaves.

The fourteenth round of negotiations on TTIP will be held in Brussels from July 11 to 15. As a member of the EU’s single market system, the UK is part of the negotiations. The outcome of the British referendum is expected to influence the effects of the final TTIP agreement.

British Prime Minister David Cameron called the so-called Brexit referendum in July of 2015 in a move to appease populist sentiment in his Conservative Party. On June 24, immediately following British voters’ decision to leave the EU, Cameron announced his intention to resign in October. The timeline for selecting a new prime minister has since been brought forward to September.

“For the moment, [the UK] are in [the EU] and when it comes to TTIP, that means that we are negotiating on behalf of twenty-eight countries and that could be the case for another year or two or even longer,” said Malmström.

“The rationale for doing TTIP is as rational today and as it was on [the day of the UK referendum], maybe even stronger. The reasons why we chose to embark on this agreement are still there. We will continue negotiations. It would be detrimental if we employed a sense of paralysis and not do anything,” she added.

At the first meeting of the European Parliament since the Brexit result, Jean-Claude Juncker, president of the European Commission, reassured EU Parliament members that the “[European] project will go on and although the British vote may have slowed us down a little, we must continue our course towards the objectives we share with renewed ambition.”

Global financial markets have reeled in the wake of the Brexit vote and investors are preparing for up to two years of instability as markets grapple with the referendum’s aftermath.

“We respect the outcome of the referendum vote, but I must say that we regret it,” said Malmström.

“It will have big consequences for the UK and the EU. We will need some more time before we can fully grasp the consequences of this referendum,” she added.

The Democratic Party’s presumptive presidential nominee, Hillary Rodham Clinton, has come out against TPP, after initially supporting it as secretary of state in the Obama administration.

“We need to convince both candidates about the importance of continuing to engage in a robust trade agenda because it is at the heart of growth not just for the US or Europe, but the global economy,” said Lane.

Trumka offered a cautious outlook as the presidential campaign cycle approaches convention season: “Workers would fare much better under a Hillary Clinton administration. Under Trump, I’m not sure whether it would be about negotiations as much as it would be about imposing a point of view on someone else, and between long-term trading partners and friends I don’t think that that is a good way to do business.”

On a visit to Washington earlier this year, Malmström stated that she and her negotiating partners would not allow US presidential campaign rhetoric to jeopardize TTIP negotiations.

On June 29, US President Barack Obama met with Canadian Prime Minister Justin Trudeau and Mexican President Enrique Peña Nieto at the annual North American Leaders Summit in Ottawa to discuss the ramifications of a Brexit and the future of trade relations between their countries and their transatlantic partners.

Even though the majority of the TTIP framework may stay intact, formal negotiations are not expected to conclude before Obama leaves office in January of 2017.

“Global trade and investment has never been more important for our economies, but political debates on trade and investment has also never been more intense [in the United States and in Europe]. Getting a deal like this will not be easy before the end of President Obama’s administration. It will require both sides to do their utmost to adopt and go further than before,” said Malmström.

With the end of Obama’s second term looming, analysts have pointed to Brexit as an additional challenge that the next US administration will have to face—TTIP negotiations notwithstanding. Responding to the uncertainty produced by the British referendum, Paul Ryan, speaker of the US House of Representatives, has urged the Obama administration to start US trade negotiations with the UK on a “parallel track” with TTIP.

Malmström expressed her commitment to getting TTIP across the finish line.

“We will do whatever we can to make as much progress as possible and, if possible, conclude negotiations before the end of the Obama administration,” said Malmström.

“This has not changed even with the referendum result,” she added.