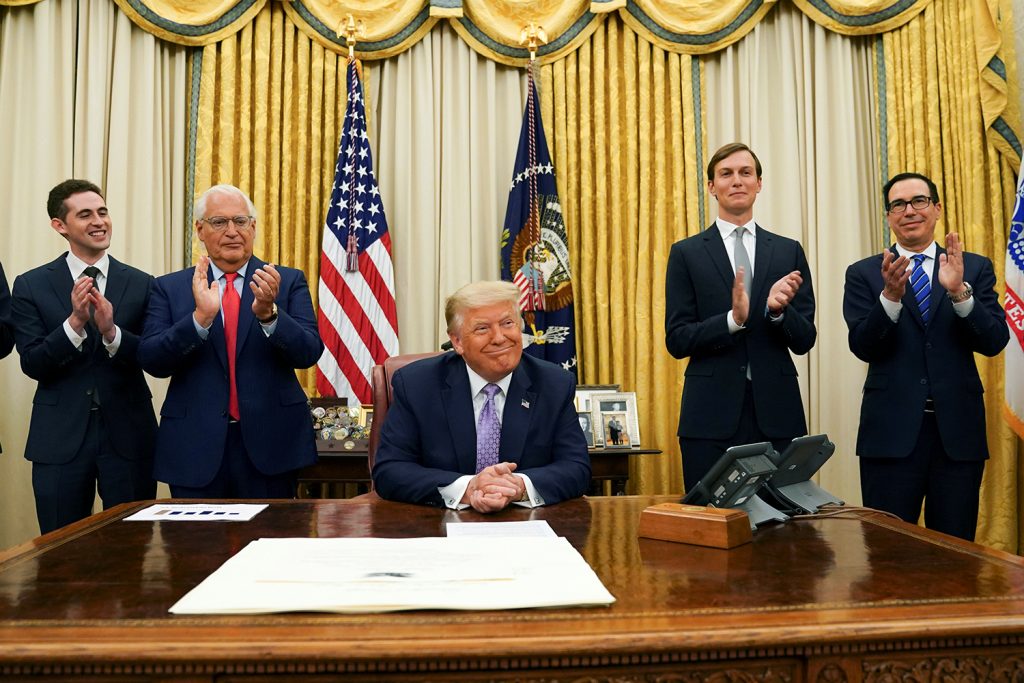 It’s been so long since the Middle East last experienced undeniably good news, that observers can be forgiven if they have difficulty recognizing it when it happens. But the “Abraham Accords” is indeed one of those moments.

It is a strategic victory for Israel, which has begun a path toward normalization with an Arab government for only the third time, and the first for one in the Gulf. Equally important, Israel has now forsworn a unilateral annexation of much of the West Bank, which would have been a fundamental strategic error. This is also a clear political victory for Prime Minister Benjamin Netanyahu and President Donald Trump, who will argue with some credibility that the open threat of West Bank annexation played a material role in providing the necessary context for the UAE to take this step.

It is a major strategic victory for the UAE, which has demonstrated a rare willingness to take risks in the interests of peace and has publicly positioned itself as both a beacon of religious tolerance and a protector of Palestinian interests. It now allows the UAE to greatly expand on the economic, cultural, and security relationships it has been quietly building with Israel and bring many of those previously secret arrangements out into the open.  At the same time, it is a wise political move for the UAE in the context of its relations with the United States and in the final months of a US presidential campaign. In addition to the support it will immediately receive from Republican circles, the UAE will be able to further distinguish its approach from that of Saudi Arabia, which is increasingly the target of Democratic disapprobation.

It is a strategic victory for regional security as it increases the pressure on Iran and its proxies. Over the four decades since the revolution, the regime in Iran has been the greatest beneficiary of the structural disunity between all of those who are threatened by its malign behavior. Tehran will undoubtedly unleash a propaganda barrage against Israel and the UAE in an attempt to provoke the proverbial “Arab street” and position itself as the sole defenders of Muslims against the “Zionist entity.” But they will likely fail. Egypt and Jordan already have relations with Israel and will work to control any major anti-Israeli movements; the countries of Levant, which for decades could be reliably counted upon to protest against Israel, are today each facing more immediate existential crises; and the countries of the Gulf share Israel’s view of the threat from Iran. What will be left will be a new potential for a growing regional anti-Iran coalition, a major strategic setback for Tehran.

Along those same lines, it is a strategic opportunity for the other Gulf states. Saudi Arabia, Bahrain, Kuwait, Oman, and even Qatar will likely wait to see the outcome of the coming diplomacy between the UAE and Israel and the exact contours of the resulting normalization agreement. They will also wait to understand the reaction from their own populations. But now that the UAE has “broken the ice,” as long as the resulting normalization is seen to benefit the UAE it is only a matter of time before several of the other countries follow. To that end, Israeli tourists would be wise to spend as much of their money as they can in the Emirates, whose economy could use the infusion. And at the same time diplomats in Riyadh, Manama, and elsewhere in the Gulf should begin considering what they can reasonably achieve on behalf of the Palestinians in the context of future normalizations.

Although it may not be immediately evident, the agreement is actually a real victory for Joe Biden as well. If American presidential elections were driven by diplomatic prowess, then George H.W. Bush would have had a second term and Hillary Clinton would have had a first.  What this does do is eliminate the threat of annexation from being an immediate, critical point of disagreement in US-Israeli relations at the outset of a potential Biden administration. This point was certainly not lost on either Netanyahu or his coalition partner and potential successor Benny Gantz, who managed at the same time to both help Trump and hedge against his potential loss in the coming election.

The Accords also help Biden because they set the stage for creative, personal diplomacy of the kind that he has long excelled, in order to further improve Israel-Gulf relations and both reaffirm and restructure the nature of the US commitment to the region for decades to come. The damage to US interests being done by the widespread perception of American withdrawal continues to elude President Trump. Even today, while taking his deserved victory lap in the Oval Office, President Trump again called for the effective withdrawal of that US commitment by arguing to end our irreplaceable role in protecting the freedom of navigation in the region.  Nothing would be more welcome in Tehran, Beijing, and Moscow.

And finally, despite what many might immediately perceive, the Accords might eventually prove to be a turning point for the fate of the Palestinian people over the long run. The further the Gulf states engage with Israel on every front, the more leverage they will have to help mitigate the worst practices of the Israeli occupation. The more Emirati and other Gulf tourists visit Israel and then have an opportunity to see first-hand the lives that some Palestinians live, the more the Gulf leaders will be required to engage directly with a peace process rather than be content to generally sit on the sidelines. And at some point, the Palestinian people will be allowed the opportunity to select a new generation of leaders, who will then have the example of the “Abraham Accords” to draw from when they work to negotiate a two-state solution.

We still remain a long way from that, unfortunately. Of course, there are many ways that one can imagine for the “Abraham Accords” to eventually go down in history as one of a long line of briefly hopeful moments that, in the end, did not live up to their initial promises. And anyone with experience with the Middle East has learned to be a reflexive pessimist. But right now it’s a pleasure to luxuriate in optimism, a feeling that should be reflected everywhere except for within the highest levels of the Iranian regime.

The battlefield over West Bank annexation

Amid the international furor generated by Israeli Prime Minister Benjamin Netanyahu’s plan, few Palestinians believe they can prevent it, even if most countries consider the West Bank occupied territory.

Image: US President Donald Trump receives applause after announcing that Israel and the United Arab Emirates have reached a peace deal that will lead to full normalization of diplomatic relations between the two Middle Eastern nations in an agreement that Trump helped broker, at White House in Washington, U.S., August 13, 2020. REUTERS/Kevin Lamarque TPX IMAGES OF THE DAY