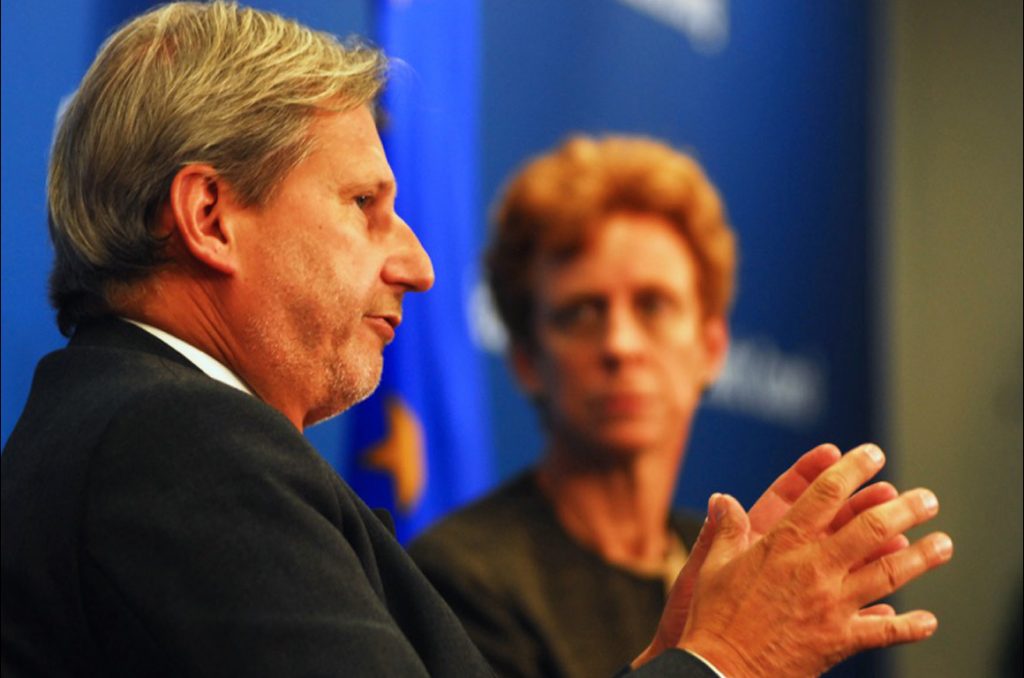 EU official: ‘Russia recognizes that we are not looking to gain territories’

Describing Ukraine as an “international issue,” a top European Union official said June 4 that turning the country into a success story will have “huge implications for the whole region.”

“Russia recognizes we are not looking to gain territories. We are looking to have peace, stability, and prosperity in the neighborhood,” Johannes Hahn, European Commissioner for European Neighborhood Policy and Enlargement Negotiations, said at the Atlantic Council.

“We talk so much about territorial sovereignty, and clearly Russia has violated international law. So this is not only a European issue but an international issue, and of course we have to address it,” he said. “Against all odds, the European family has managed not only to introduce sanctions [against Moscow] but to keep them.”

Hahn, who is also a Vice President of the European People’s Party, said the EU is often criticized for its “soft power” approach. But, he added, that approach has paid off in the long run.

That approach was underscored at the European Union’s recent Eastern Partnership summit—held May 21-22 in Riga, Latvia.

Despite the perception that the summit had been a failure, Hahn said it provided an opportunity to “set out a positive agenda for the future.”

“Those who have written that this summit was a failure probably wrote their commentaries before the event,” he said. “I prefer to define this kind of summit more as a stocktaking event, an opportunity to see what has been achieved in the past two years. When the Eastern Partnership was launched in 2009, there was a different view about the development of these six countries.”

The Eastern Partnership encompasses Armenia, Azerbaijan, Belarus, Georgia, Moldova, and Ukraine, but only the last three have clearly expressed their desire to join the EU.

“Armenia was ready to sign a DCFTA [Deep and Comprehensive Free Trade Area] with us, but at the very last moment they decided not to sign up, because they were forced to join the Eurasian [Economic] Union,” said Hahn. “Two weeks ago, a few days before summit, we submitted our report to the European Council to receive a mandate to negotiate with Armenia a possible cooperation contract with us. The same applies to Azerbaijan.”

Belarus is the only one of the six countries that hasn’t signed an EU action plan. Ruled since 1994 by President Alexander Lukashenko, it is often called “Europe’s last dictatorship,” though Hahn barely mentioned Belarus in his Atlantic Council speech.

Rather, his focus was how to consolidate the reforms launched at the last Eastern Partnership summit, held two years ago in Vilnius, Lithuania.

“Johannes Hahn has one of the most challenging portfolios in the current European Commission,” said David O’Sullivan, the EU’s Ambassador to the United States, who introduced the Austrian-born businessman and politician. Frances G. Burwell, Director of the council’s Transatlantic Relations Program, moderated the panel.

Hahn, who oversees an annual budget of €15 billion, was in Washington for meetings on Capitol Hill and at the State Department, as well as with World Bank and International Monetary Fund officials. His visit came only after days after he brokered an EU mission to the Balkan republic of Macedonia, in the aftermath of rioting between Macedonians and ethnic Albanians that killed twenty-two people in Kumanovo, near the border with Serbia.

The EU’s newest member is Croatia, which joined in July 2013 after more than seven years of negotiations. In addition, five countries are official candidates for EU accession: Iceland, Macedonia, Montenegro, Serbia, and Turkey. Additional potential candidates include Albania, Bosnia and Herzegovina, and Kosovo, though Hahn acknowledged that—given the present economic stagnation throughout much of Europe—it’s unlikely the EU will expand beyond its current twenty-eight members at least until after 2020.

“There is no EU member country whose citizens are in favor of new members,” he said. “Probably as a result of the current crisis, they believe a new member is an additional financial burden. In order to convince our own citizens, we have to demonstrate that the new member is an added value, not a burden—and only if their economic performance is on a similar level as the [existing EU] average.”

Hahn added: “In this mandate, new member states will not be possible, but it doesn’t mean we have stopped our activities. Quite the opposite; we have simply readjusted how we prepare our future members so that from day one of their membership, they’re full members.”

Georgia and Moldova are eager to someday become EU members, though for now, both countries are negotiating a visa-free regime that would allow their citizens to travel freely throughout the Schengen area. Hahn said that by year’s end, his office might be able to “report positively” on developments in that regard, though the situation in Ukraine is clearly much more volatile.

During the question-and-answer session that followed, a member of the audience asked Hahn about repression in Azerbaijan, where President Ilham Aliyev—in power since 2003—has jailed more than one hundred political prisoners simply for opposing his regime.

“Whenever I’m in these countries, I try to meet representatives from civil society,” Hahn said, adding that he has personally raised human rights issues with Aliyev.

“In politics, you have to be a little naïve in order to achieve something. I think you need a certain naivete to open the door. We have to try again and again. We cannot accept that frozen conflicts will always be frozen conflicts,” he said. “We, as Europeans, have a huge interest in improving the situation, because this is our own neighborhood. We have an obligation to complete 1989—and we are not yet there.”