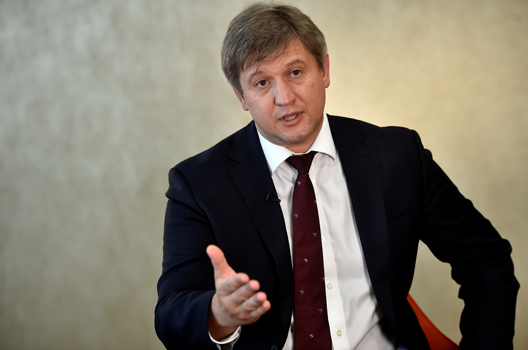 Despite past difficulties, Ukraine’s track record of economic reforms appears to have set the country in the right direction, according to Oleksandr Danylyuk, finance minister of Ukraine.

Speaking at the Atlantic Council on April 17, Danylyuk struck an optimistic tone about the coming years in Ukraine as he addressed the economic reforms that the government in Kyiv has undertaken so far. “Despite the difficulties, the previous implementation [of economic reform] shows we can achieve,” he said. According to Danylyuk, that the slew of reforms carried out in the past three years had and will continue to change Ukraine by nourishing the hopes of the Ukrainian people.

The Ukrainian economy is expected to grow at 3.2 percent this year, and into 2019, according to the International Monetary Fund’s just-released World Economic Outlook. However, Ukraine will face a presidential election in 2019, creating both volatility and uncertainty which could cloud prospects for further economic growth.

According to Danylyuk, reforms led to economic stabilization defined by strengthening growth, slowing inflation, fiscal consolidation, and reserves accumulatio. These achievements, he said, allowed Ukraine to return to the capital markets in September 2017.

However, the reforms put forth by the current government are not yet complete. Therefore, the results have not yet been tangible enough to avoid a certain vulnerability ahead of next year’s election, said Danylyuk. In the context of a pre-election year, volatility and uncertainty have been the main deterrents for international investors, further complicating the implementation of reforms and creating the vulnerability that Danylyuk described. Confidence in Ukraine’s economy remains fragile, and potential investors seem to have switched into “wait and see” mode, delaying investment decisions due to a level of caution that is typical ahead of elections.

Ultimately, Danylyuk insisted on the current government’s ability to achieve its stated objectives, in terms of economic growth, for the shorter and longer-term transformation of the country by implementing the planned reforms and following through on their application.

Danylyuk suggested Kyiv press ahead with short-term and long-term transformations that remain to be carried out, even as the political landscape becomes more complex ahead of the election. He said that land market reform, competition in the energy sector, and health care reform remain high on the political agenda, and must be implemented with care. However, population fatigue (declining popular support after a slew of government reforms), disbelief in institutions, and the danger of populism cannot be underestimated. “Populists can fill the pockets of Ukrainians with promises. That is usually what populists do,” said Danylyuk.

He said that the government in Kyiv can counteract the influence of populism by creating and communicating a roadmap for improvement, a vision for the coming years based on a realistic assessment of the Ukraine’s resources. Multi-year budgeting based on concrete actions can foster real transformation, whereas what populists are promising will appear impossible when faced specifically with the resources available. One needs to state clearly that populist recipes will not work.

Further progress on reforms can help to keep populist rhetoric in check. In Washington, DC for the spring meetings of the International Monetary Fund (IMF) and World Bank, Danylyuk acknowledged that the IMF would like to see Ukraine make more progress on specific reforms, notably in the energy sector and on its anti-corruption law. He described the steps that had been taken to reign in corruption, and the consequent pushback faced by the current Ukrainian government. However, he said, the next stage involves setting up an anti-corruption court, distinct from the regular court system. Danylyuk explained the distinction is necessary because of volume of cases keeping the regular court system busy. When corruption cases arise, he said, they require priority treatment by the court system.

According to Danylyuk, the IMF has requested that the Ukrainian authorities expedite the legislation necessary to establish the anti-corruption court through the parliamentary process. He expressed confidence that the anti-corruption law, which has undergone thorough amendments through the legislative process, could pass in the next couple of months.

Danylyuk noted that, since September 2017, Ukraine has raised fresh money from the financial market, and there were plans to issue again in future. He mentioned the authorities have begun to explore new debt instruments but wait for the most optimal conditions on the markets. Currently, Ukraine’s specific financing needs are met by relying on budget discipline and on internal and external borrowing. Questions related to debt management and financing needs will only become more relevant in 2019 and 2020 as significant payments Ukraine will need to make reach their due dates.

As next year’s election campaign gains traction, the government will need to maintain momentum for carrying out its planned agenda for reform. According to Danylyuk, continued international attention to reforms and the active participation of the Ukrainian population in the country’s push for swift transformation will be essential moving forward.