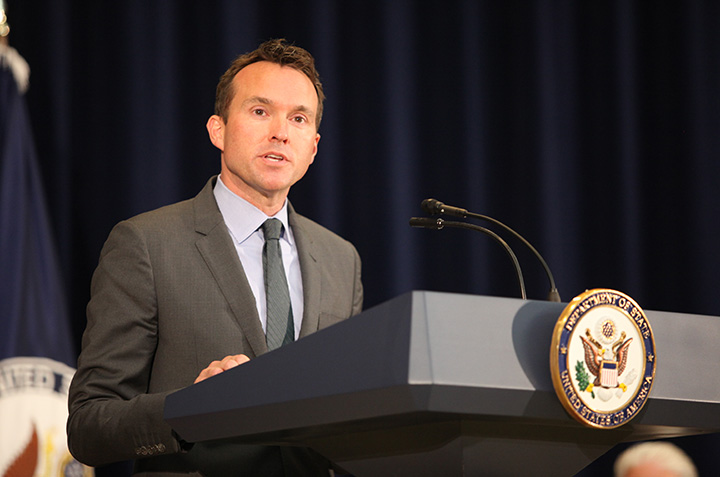 US Secretary of the Army Eric Fanning delivers remarks at the US State Department in Washington on June 21. Fanning is the first openly gay person to serve as the head of a US military organization. (Atlantic Council/Victoria Langton)

The promotion of inclusiveness and diversity goes hand in hand with enhancing the United States’ national security capability, US Secretary of the Army Eric Fanning said on June 21.

“Our national security will suffer if we allow bias or prejudice to close doors and discourage great future leaders from serving,” he said.

“Building an army that reflects the rich diversity of America will make us stronger and help us build bridges across our country and into every community,” he added.

Fanning, who was nominated by US President Barack Obama and confirmed by the US Senate earlier this year, is the first openly gay person to serve as the head of a US military organization.

Fanning spoke at an event hosted by the Atlantic Council and GLIFAA (formerly known as Gays and Lesbians in Foreign Affairs Agencies) to mark pride month at the US State Department in Washington. He was joined by US Secretary of State John Kerry.

The event was held in the shadow of the June 12 attack on the LGBT community by a lone gunman who opened fire in a gay-friendly nightclub in Orlando, Florida. Forty-nine people were killed and fifty-three others were injured in the worst mass shooting in modern US history.

The attacker, Omar Mateen, claimed allegiance to the Islamic State of Iraq and al-Sham (ISIS) in a call to emergency services. Mateen was previously under investigation by the FBI but the case was eventually closed due to inconclusive results; the firearm used in the attack was legally bought by the assailant.

Progress in promoting LGBT rights and institutionalizing anti-discrimination policies in the United States and abroad is steady and resolute, but the “fight is not yet won,” said Kerry.

“From Stonewall to New Orleans, to Harvey Milk to Matthew Shepard, to Orlando, the list of outrages committed against the LGBT community of our nation is long—too long. But those crimes have done nothing to prevent the historic gains that have been made in broadening anti-discrimination laws, legalizing gay marriage, exposing inequalities, and expanding public acceptance,” he added.

In the aftermath of the attack in Orlando, Kerry and US Ambassador to the United Nations Samantha Power coordinated a joint statement on behalf of the UN Security Council condemning the attack—a significant move from such a body that has historically stayed out of issues surrounding LGBT rights issues due to diplomatic pressure from certain member states.

Recent hearings at the UN Human Rights Council following the Orlando shooting show that more anti-discrimination mechanisms are being implemented on an international scale to safeguard the rights of the LGBT community.

US Secretary of State John Kerry delivers remarks at the US State Department in Washington on June 21. (Atlantic Council/Victoria Langton)

“It was not that long ago that LGBT persons were banned from the State Department. Today, we have eight openly gay ambassadors…[and] our diplomatic security bureau no longer revokes security clearances based on sexual orientation. We have hundreds of LGBT individuals in our bureaus at the State Department and USAID around the world,” said Kerry.

“We have to keep moving forward and that is why we are engaged in every level of leadership—in Washington, through our embassies and our global partners—in a concerted diplomatic effort to push back against bigotry and violence in all of its forms,” he added, referring to current efforts to combat LGBT discrimination.

Kerry and Fanning praised the historic victories for LGBT communities, but contended that despite this progress much more needs to be done.

Many countries discriminate against LGBT communities—either by imprisonment, exile, or in some cases, capital punishment. A majority of these countries are in sub-Saharan Africa or the Middle East.

On April 25, Xulhaz Mannan, a USAID employee, was fatally stabbed in Bangladesh. Mannan was known for his work in supporting human rights networks and for establishing the first LGBT-oriented magazine in Bangladesh. No individual or organization has claimed direct responsibility for Mannan’s death. Following Mannan’s death, Kerry called Bangladeshi Prime Minister Sheikh Hasina and offered US support in the investigation.

Kerry and Fanning have worked in tandem and with partner organizations to foster equality and support LGBT rights in their respective organizations.

“Our expectations are realistic, our language is diplomatic, but our determination in support of equality is absolute,” said Kerry.

“We have come a long way, but make no mistake, we have a long way still to go—both at home and around the world,” he added.

Fanning said: “We have grown stronger as a military and as a nation as we opened up opportunities for those who previously didn’t have them. By leveraging diversity and creating an inclusive environment in which all are valued we engender opportunities to be a part of the greatest mission there is: defending our nation.”

“Indeed, the only way to compete in the 21st century—with the growing complexity of global security—is to attract the best and brightest Americans willing to serve, regardless of religion, gender, sexual orientation, or gender identification,” he added.

In December of 2010, US President Barack Obama repealed the US Department of Defense’s “Don’t’ Ask, Don’t Tell” policy, which prohibited openly gay people from serving in the military. The LGBT community saw the repeal as a major victory.

“When the shooting starts, when the battle is joined, it doesn’t matter whether the soldier next to you is black or white, Christian or Muslim, gay or straight, it only matters that he, or she, can do the job,” said Fanning.

“Despite the extraordinary progress over the last few years, LGBT Americans still face discrimination simply for who they are. In line with America’s commitment to the notion that all people should be treated fairly and with respect, champions of this cause at home and abroad are upholding the simple truth that LGBT rights are human rights,” he added.